Each unique in their musical offerings, the Percussion Ensemble and Crimson Harps invite you to their final concerts of the semester. 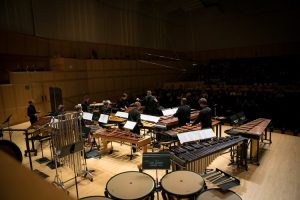 The award-winning U Percussion Ensemble and Percussion Chamber Groups will perform a concert on April 10th, 2018 in Libby Gardner Hall. A tour de force of works for percussion from classical to contemporary, as well as non-western and jazz influenced works, will be on display. Highlights from the program include “to wALk Or ruN in wEst harlem” by Andy Akiho and “Prelude to Paradise” by Jacob Remington. Described as “mold-breaking,” “alert and alive,” “dramatic” and “vital” by the New York Times, Akiho is an eclectic composer and performer of contemporary classical music. His work “to wALk Or ruN in wEst harlem” is provocative and evokes images and sounds of the city. The decision of whether to walk or run is ultimately left to the listener although prompted throughout the piece. “Prelude to Paradise” is a dynamic work for percussion orchestra. This piece is both heavy metal in feel yet classically orchestrated, utilizing a perfect balance of wood, metal and skin percussion colors. Remington provides an array of layers with powerful counterpoint complimented with special effects and moments of single clarity. 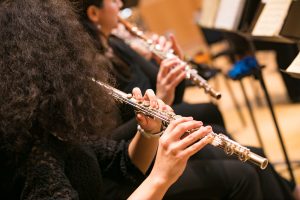 Runnin’ fl’UTES’ will perform a unique collection of pieces ranging from a French flute quintet by Ravel to a South American inspired flute choir piece by Ricardo Matosinhos. In addition, the ensemble will play “Pontchartrain” by Valerie Coleman. This piece is a narrative that depicts the rebuilding of New Orleans. The melodic work begins with a slow section describing the devastation of Hurricane Katrina, followed by a traditional New Orleans “Second Line” romp where the choir is transformed into a street brass band. 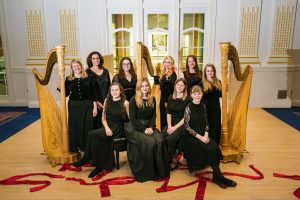 The acclaimed Crimson Harps are a group of undergraduate and graduate students that enchant audiences with their exciting arrangements of harp music. On April 23, 2018, in Thomson Chamber Music Hall, these nine harpists will perform a diverse program including a unique arrangement of a traditional Kenyan folk song. This concert is free and open to the public.