By Josiane Dubois, Department of Theatre 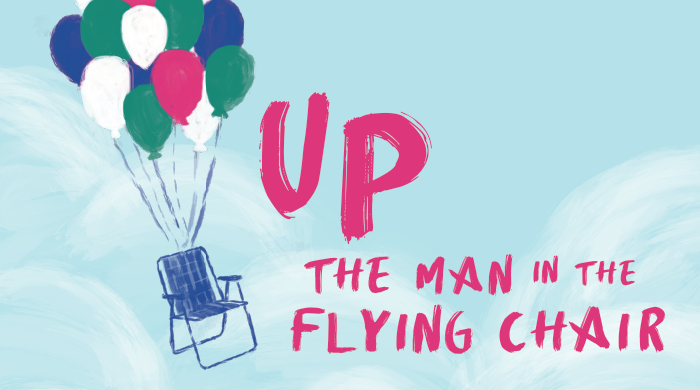 The Department of Theatre is thrilled to present the dramatic comedy written by Bridget Carpenter “Up (The Man in the Flying Chair),” a story that captures the essential truth about the lure of the impossible dream, its freedom and its danger. Directed by head of the actor training program Chris DuVal, the production runs March 9-17 in Studio 115 in the Performing Arts Building, 240 S. 1500 East.

“Up (The Man in the Flying Chair)” is based on the real-life escapade of truck driver Larry Walters who attached 45 helium-filled weather balloons to a lawn chair and found himself 16,000 feet above the world. He rose up from his backyard in San Pedro, CA, was seen by commercial airliners and drifted into controlled air space near Long Beach airport.

“This is a story about breathtaking tension between hope and despair,” said DuVal. “We get to see inside Walter’s mind as he’s chasing a dream of who he is.”

This production shows what it is to pursue one’s dream. To go on a hero’s journey where the destination is unknown, and the path uncertain, but that it is a calling of something that must be undertaken.

“Up (The Man in the Flying Chair)” at a glance:

Dates and Times: March 9-11 and 15-17 at 7:30 p.m. with a matinee on March 17 at 2 p.m.
Post-Performance Discussions: March 16
Location: Studio 115 in the Performing Arts Building, 240 S. 1500 East. Parking is available in the visitor’s lot to the south of the theatre, at Rice-Eccles Stadium or on Presidents Circle.
Tickets: General admission tickets are $18, U faculty and staff are $15, U students are free with UCard and all other students with valid student ID are $8.50. Tickets can be obtained by calling 801-581-7100, online at tickets.utah.edu or at the Performing Arts Box Office, located at Kingsbury Hall.
Age Recommendations: Ages 14+