Back by Popular Demand, Taylor Mac Returns to UtahPresents with “24-Decade History of Popular Music (Abridged).”
University of Utah Communications

Back by popular demand, the luminous Taylor Mac returns to Salt Lake decked and bedazzled in gloriously irreverent regalia for a night that is “startlingly unique…a must-see for anyone who wants to see a kinder, gentler society” (Huffington Post). 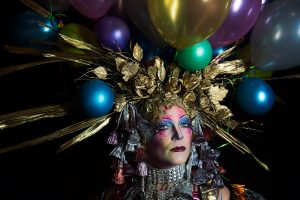 Taylor Mac (who uses “judy”, lowercase sic, not as a name but as a gender pronoun) is a playwright, actor, singer-songwriter, performance artist, director and producer. “A critical darling of the New York scene” (NY Magazine), TimeOut NY has called Mac, “One of the most exciting theater artists of our time.” The Village Voice named Taylor the Best Theater Actor in New York (2013) and Best Male Vocalist (2015).

Taylor Mac’s “A 24-Decade History of Popular Music” is an acclaimed, bedazzled mashup of music, history and theater that decodes the social history of the United States—all 240 years—through 246 songs that were popular throughout the country, and in its disparate communities, from 1776 to the present day.

When Mac first performed on campus in 2017, judy performed songs from the civil rights era, focusing on 1946-1976. The performance was an audience favorite, full of amazing music, jaw-dropping costumes and audience participation. The performance on Nov. 2, an abridged version of the full 24-hour work, will feature selections spanning the entirety of American history.

“[Taylor Mac’s A 24-Decade History of Popular Music] was one of the great experiences of my life.”—Wesley Morris, The New York Times

Mac debuted the full, epic “A 24-Decade History of Popular Music,” in New York in October 2016, over a 24-hour period, to rave reviews, with The New York Times proclaiming, “Normally, [Taylor’s] a star. This weekend [Taylor] was a solar system.” The performance was named to three New York Times Best of 2016 lists, including Best Theatre and Best Performance.

“Fabulousness can come in many forms, and Taylor Mac seems intent on assuming each and every one of them.” — The New York Times

In conjunction with the performance, an exhibit of Mac’s costumes designed by New York-based designer Machine Dazzle, is on display at the Utah Museum of Contemporary Art. The exhibit runs through Nov 2. More info: https://www.utahmoca.org/portfolio/machine-dazzle-sacred-objects-act-1/

Following the performance in Salt Lake, Mac will return to New York where judy’s new play Gary: A Sequel to Titus Andronicus will open next spring, starring Nathan Lane and Andrea Martin.

More info can be found here.

A new exhibition presents the ancient tradition of Chinese landscape painting (shanshui) through a twenty-first-century photographic lens. salt 14: Yang Yongliang opens Friday, October 26, and will be on view through June 2, 2019. Admission is free to U faculty, staff, and students. Yongliang will give a free artist talk Wednesday, April 3, at 7 pm at the UMFA.

Digital photography is Yang’s ink, and editing software is his brush. Trained in classical calligraphy and painting as well as in emergent digital technologies, Yang constructs his imaginary landscapes by densely layering thousands of black-and-white digital photographs that he has taken on the busy streets of Shanghai and in other expanding cities across Asia to create a new, yet reminiscent, landscape.

salt is the UMFA’s ongoing program of exhibitions that showcase work by emerging artists from around the world. salt aims to reflect the impact of contemporary art, forging connections to the global and bringing new and diverse artwork to the city that shares the program’s name.

The vision for this futuristic, women-ruled production of “Julius Caesar” comes from guest director, David Carey. Carey is a UK National Teaching Award-winning Fellow who has worked as a Voice and, Text Director on over 30 productions at the renowned Oregon Shakespeare Festival, and who has taught at the Royal Academy of Dramatic Art in London. He made the decision to cast 13 women and 5 men in what he calls a “gender-flipped version of Shakespeare’s play.” The casting led to the development of a conceptual Rome set in 2118, where Caesar has declared herself “Mother of the Motherland.”

A post-performance discussion about power and dominance of women on the theatre stage will be held on Friday, Nov. 2, immediately following the evening 7:30 p.m. performance. Adjunct Assistant Professor of Theatre and of Gender Studies, Lynn Deboeck will be leading the discussion with production dramaturg, Alia Richards where audiences are invited to engage in the conversation.