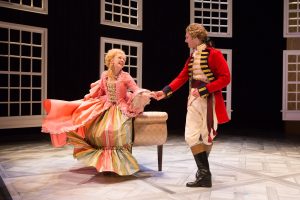 The University of Utah’s Department of Theatre ends the 2018-19 season with Richard Brinsley Sheridan’s British comedy, “The Rivals.” Directed by Alexandra Harbold the production runs April 5-14 in the Babcock Theatre in the lower level of the Pioneer Memorial Theatre, 300 South and University Street.

“The Rivals” features the romantic misadventures of wealthy Lydia Languish who is determined to marry her penniless lover Ensign Beverley. But first, she must contend with the immortal Mrs. Malaprop, who through a series of hilarious mix-ups, raises serious objections to Lydia’s choice for a husband. With iconic dueling scenes directed and choreographed by Adriana Lemke, “The Rivals” blends rivalry, chivalry, secrecy, romance and shameless social climbing, creating a satire masterpiece.

As a play where people pretend to be someone, they’re not to win the day, where appearances are overvalued and realities are ignored, “The Rivals” continues to be relevant in today’s society. Harbold’s lively direction and creative vision have produced a world where the designs reflect both period and contemporary elements. The vibrant costumes designed by performing arts design student, Heather Rogers compliment the open concept set by scenic designer and artist, Thomas George.

The sparkling wit and whirlwind plot of “The Rivals” has delighted audiences for over 240 years. The U’s production reignites Sheridan’s masterpiece with a youthful talented cast made up of students from the Actor Training Program who perform a fresh and fast-moving performance that showcases the cleverness of Sheridan’s play. A talk-back led by dramaturg and professor Sydney Cheek-O’Donnell will be held after the performance on April 6.

“The Rivals” at a glance:

Location: The Babcock Theatre, located at 300 South and University Street (1400 East) in the Simmons Pioneer Memorial Theatre, lower level. Free parking is available to the south of the theatre and at Rice-Eccles Stadium.

Tickets: General Admission tickets are $18, University of Utah faculty and staff are $15, University of Utah students are free with UCard, and all other students with valid student ID are $8.50. Tickets can be obtained by calling 801-581-7100, online at tickets.utah.edu/events/big-love/or at the Performing Arts Box Office, located at Kingsbury Hall.

Content warning: Children under four years of age, including babes in arms, will not be admitted. Mature/suggestive content.