Gary Wilkinson towers above his classmates at the University of Utah S.J. Quinney College of Law.

It’s not just Wilkinson’s 6-foot-9-inch frame — a build that helped propel him into a standout collegiate basketball player with a professional career abroad — that sets him apart from others. It’s his dogged work ethic and a distinct perseverance that has helped him rise to one of the top spots in a competitive law school class, putting him on the fast track to a job in a prime “Big Law” firm of his choice upon graduation. 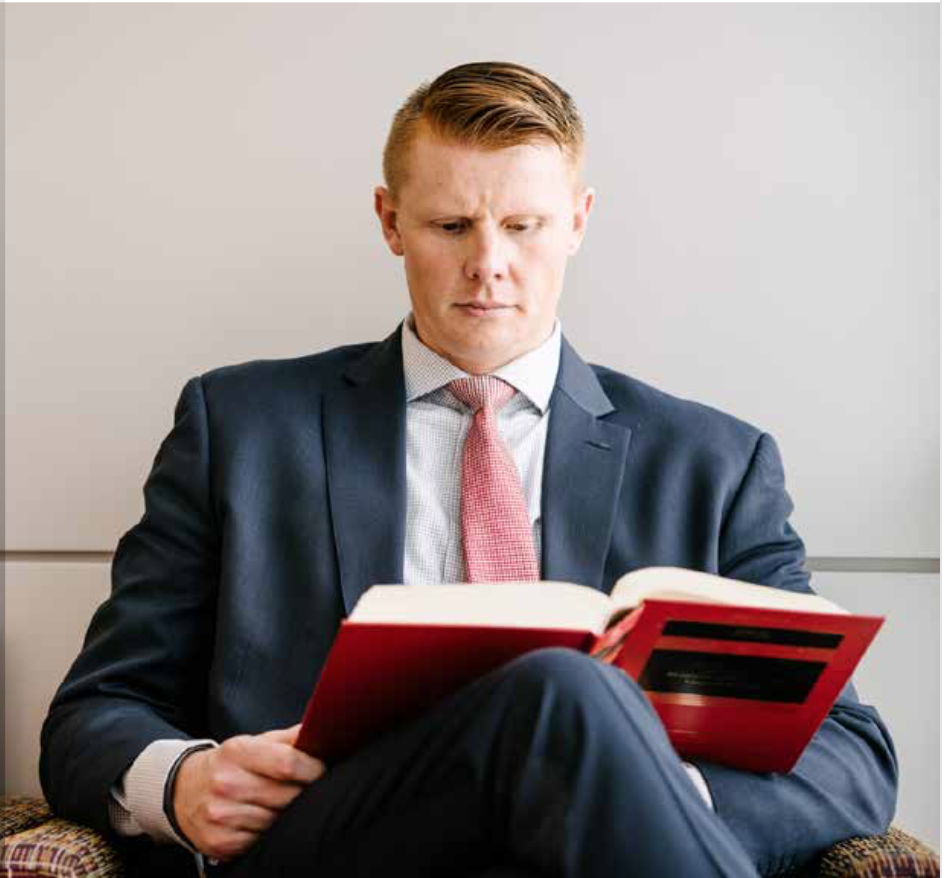 Wilkinson’s story, however, isn’t all a fairytale. In 2001, he dropped out of high school months before graduating. A few years before that, he’d been cut from the Bingham High basketball team after clashing with coaches who thought he had an attitude problem. The South Jordan native befriended a crowd that encouraged him down a road that was leading him closer to juvenile detention instead of on the path to becoming a would-be lawyer. By his late teens, Wilkinson had accumulated numerous drug and alcohol-related offenses and had a choice to make: Continue down a dead-end road or turn his life around.

Wilkinson chose the latter, in part after a friend, Tyler Livingston took his own life in 2000. The loss helped Wilkinson to redirect. He got his GED. He connected with the LDS Church and served a two-year mission in Calgary, returning to Utah in 2005.  Despite a hiatus from the basketball court and never playing high school ball, Wilkinson took the unusual step of asking Salt Lake Community Coach Norm Parrish to give him a shot at playing. He tried out and made the team.

For Wilkinson, that chance launched him toward becoming the person he is today. He played for two years at SLCC before transferring to Utah State University, where he became a collegiate basketball star, gracing the pages of Sports Illustrated magazine, while helping the Aggies earn their first NCAA tournament berth in several years in 2009. He was named the 2009 Western Athletic Conference player of the year and today he’s still recognized on the streets of Logan.

In Logan, the kid who hated to read growing up also found his niche in academia, earning close to a 3.9 GPA as a sociology major while choosing to read about court cases in the news for fun in his spare time. He felt drawn to the law, in part because of days spent in juvenile courtrooms where he’d wonder, as a defendant, whether his rights were being fully represented. With those days behind him, he found himself wanting to know more about the law and how it shaped the world around him.

Wilkinson continued his athletic career professionally, trying out for the Utah Jazz before ultimately finding success overseas competing in South Korea, Greece, New Zealand, Estonia and Puerto Rico. Along the way, he built a family with his wife, Jessica, a former collegiate volleyball player. (The family today has three children, Jordan, 6; Eva 4 and Ethan, 1).

Three years ago, Wilkinson returned to Utah after his father passed away. His agent around the same time called with an offer to play professionally in Japan. Wilkinson was ready to sign on for another international stint. But a trip to southern Utah and some soul searching made him realize he wanted to pursue law school, another dream he’d always had. The time felt right to put roots back down in the state he and his wife wanted to call home for good.

“I took the LSAT and my passion for basketball was waning. I felit like there was more I could do with my life and I felt like law was what could be next,” Wilkinson said.

On Friday, May 12, Wilkinson was among 116 graduates to earn juris doctor degrees from the University of Utah S.J. Quinney College of Law. Wilkinson made his mark in law school, leaving the U near the top of his class. He scored a prestigious clerkship with a federal court judge on account of his excellent academics and served on the senior staff and served as an articles editor on The Utah Law Review.

“Above all else, what stands out about Gary is his attitude. Not only is he perpetually positive, he is always working to improve,” said Lincoln Davies, associate dean for academic affairs at the S.J. Quinney College of Law, who supervised Wilkinson as a research assistant. “I don’t know if this is something he learned from being an athlete or if it’s just part of who he is, but it is incredibly refreshing, and it rubs off on everyone around him. The question you’ll hear him ask is not, “Can we do this?,” but “How can we make this happen?” This will serve him tremendously as a lawyer.”

Wilkinson has shared his turnaround story with at-risk youth across Utah in the past and continued similar outreach work on occasion in law school. He also volunteered considerable service hours at the College of Law’s community clinic in Ogden as part of the college’s Pro Bono Initiative, a volunteer program that allows students to build real world problem-solving skills while providing free legal advice to people who otherwise would fall through the cracks of the justice system.

JoLynn Spruance, director of the law school’s Pro Bono Initiative, said Wilkinson easily adapted into a leadership role at the community clinic in Ogden. She noted Wilkinson’s career aspirations in the corporate law sector didn’t dissuade him from donating as much time and energy to community service as other students with public interest law goals.

“I think that is something very unique about Gary,” said Spruance. “He truly cares about people and about giving back to the community.”

With a job at Salt Lake City-based Snell & Wilmer awaiting him after graduation, Wilkinson said he’s excited to start a new chapter after three years in law school.  His former coach at Salt Lake Community College, Norm Parrish, said he’s proud to see Wilkinson forge ahead with a law career and said the one-time troubled teen will likely continue to serve as an inspiration to others for years to come.

“Over the years, we have (pointed to Wilkinson) as a poster boy.  He didn’t have everything handed to him. He doesn’t have excuses and here’s what he’s made out of it,” said Parrish, who keeps in touch with Wilkinson and today is the head basketball coach at Westminster College. He said Wilkinson’s comeback story has been a helpful motivator to drive other wayward players back on track.

He also knows that Wilkinson will likely achieve whatever he sets out to do next.

“He told me years ago that someday he was going to be a judge,” said Parrish. “ And I think he will be.”

The Constitution, political norms and the future of the Supreme Court
September 25, 2020