The U’s student recovery program has done something no other collegiate recovery program has accomplished: This past spring, the Recover @ the U leadership team and faculty advisor Jason Castillo, along with Utah Rep. Mark Wheatley, lobbied for and were awarded annual funding from the Utah Legislature.

The program received $100,000 in ongoing funds for the program. The leadership team has exciting plans for the funding they’ve received, including acquiring and furnishing a drop-in center for ongoing support, continued training and development, staff support and scholarships for students in recovery.

At some point, many people who misuse alcohol or drugs are hit with the forceful impact of compulsive use, unware of when and how they passed that invisible line between ”recreational use” and ”addiction.”  Research shows that approximately 40 percent to 60 percent of people with a substance use disorder will relapse within a year of treatment — stuck in a space of knowing their habit is out of control, yet unable to stop using. 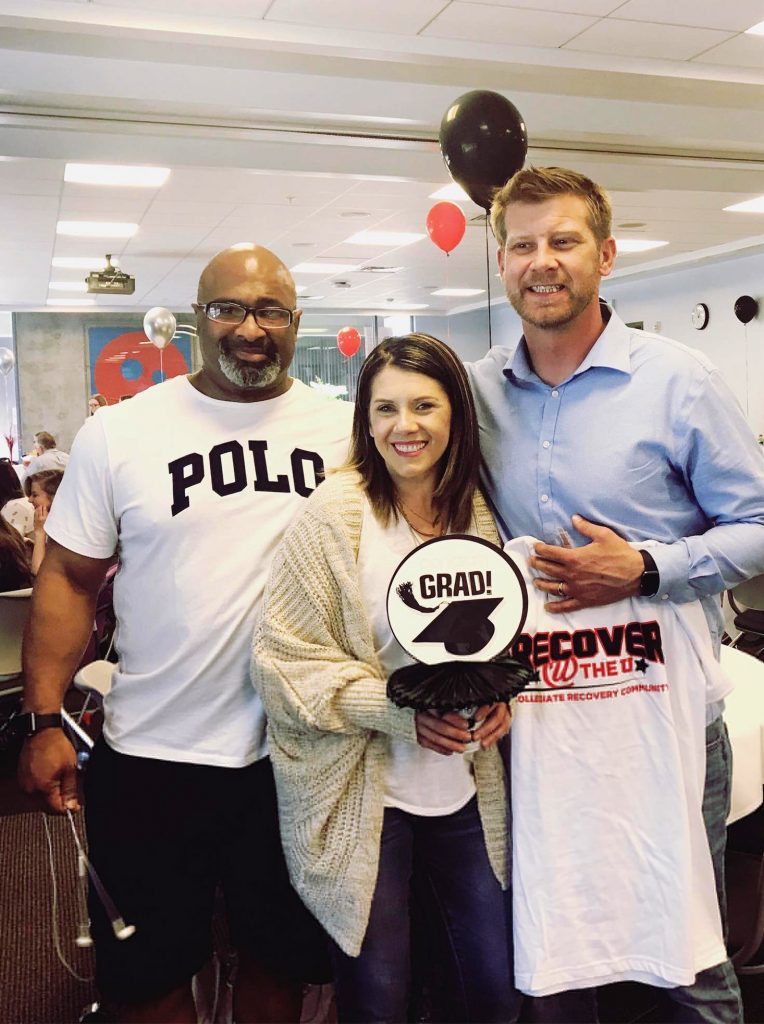 Additionally, according to SAMHSA, millions of adults have co-occurring disorders — battling a mental health disorder along with their substance use disorder — which adds additional challenges. Addiction is also largely misunderstood within society, and people in recovery have a multitude of negative stereotypes and stigmas they’re forced to confront. Making new connections in the face of these stigmas can be daunting, but going back to familiar people and places might trigger a relapse. One MSW student described her experience this way:

Reentering society after being in treatment was exciting, but also terrifying. I was paranoid for the first little bit, afraid that I would get in a sticky situation that will lead me back to my old lifestyle. When going back to school, I hadn’t anticipated how much stress I would actually endure working a full-time job and attending classes full time. The stress alone was triggering. Because no one on campus knew me at first, the university felt like an unsafe space to be in. I experienced a lapse in judgment once while going to school, which left me feeling ashamed and guilty. If it weren’t for the other students in recovery and in my recovery community, I could have let that lapse in judgment become a much more serious situation. Individuals in recovery are strong, we endure a lot, we have experienced a lot of pain, growth and triumph. We, however, have a lot more to be aware of when going back to school or being fresh out of rehab.

This is why surrounding oneself with communities of support is so vital to the recovery process. Support groups exist primarily to let those in recovery know they are not alone; there are others fighting the same battle.

And this is why Recover @ the U started. Students in recovery felt a gap in their recovery efforts. In a student-led effort, supported by the College of Social Work, students came together and acquired funding to create a community of support. Since Recover @ the U’s creation in 2015, their community has grown from a handful of students to more than a hundred students and allies, filling a critical need on campus. A big part of their work is challenging the narratives that surround what it means to be a person in recovery.

Former Recover @ the U president and participant Jessica said, “When we began Recover @ the U, many students didn’t want others knowing they were in recovery. Even the ones I knew who were [in recovery] didn’t think it would be good for their futures to identify that way. I found that to be very disappointing but continued doing the work.”

The variety of activities these students sponsor is extensive. In addition to two to three weekly meetings (held at different times during the day in an effort to accommodate as many schedules as possible), the students host sober tailgate parties and frequent socials, present to student and faculty groups across campus, host and lead education sessions at local treatment centers and attend and present research at conferences to spread awareness of their presence at the U.  All this, in many cases, in addition to going to school, holding a job and maintaining a family.

Why do they do it? Jason Castillo, Recover @ the U’s faculty advisor, believes it’s because of their commitment to sobriety.

“They want the community of substance abuse practitioners, advocates, directors, and persons in recovery to know, ‘You can go to the University of Utah and there is an environment there that will lend itself to recovery,’” he said. “We have a mission here at the U not just of educating students, but providing an environment committed to the health and well-being of our students.”

Justin, a student leader and Recover @ the U participant, said the program has been essential to maintaining his sobriety.

“As a full-time student and being on the campus nearly every day for hours at a time, I needed a safe place where I could get support,” Justin said. “I needed to have sober student support on campus. I found safety around students that had the same goals as me — staying sober, having a good time on campus, and living the college experience.”