How do new species evolve? A species is defined by the fact it cannot breed successfully with another species. So if two species mate, “hybrid inviability genes” that kill hybrid offspring or render them infertile play a central role in maintaining separate species. 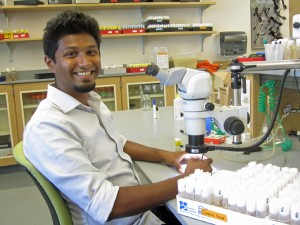 Now, University of Utah biologist Nitin Phadnis has discovered a long-sought gene that keeps two common species of fruit flies from reproducing successfully with each other. His study was published in the prestigious journal Science.

“Even when we are little kids, one of the first things we discover about the world is the tremendous number and diversity of species on Earth,” says Phadnis, an assistant professor who holds the Mario R. Capecchi Endowed Chair in Biology.

Phadnis says new species evolve when two populations of one species become separated – usually geographically – and then “something changes in their genome such that when they previously used to be compatible, now their hybrids are dysfunctional.”

During the past decade, other scientists identified and implicated two other genes that play a role in causing dead or infertile offspring when the two fruit fly species mate. One is a D. simulans gene named Lhr (lethal hybrid rescue), and the other is a D. melanogaster gene named Hmr (hybrid male rescue). If either gene is absent, hybrid males survive. But evidence indicated a third, unknown gene also was required to make hybrids dead or sterile.

Phadnis and colleagues finally identified it as gfzf, which evolves quickly, as biologists expect from hybrid inviability genes. But a big surprise is that gfzf is a “cell-cycle checkpoint gene,” a kind of gene that usually evolves slowly because it is essential in most organisms and thus “conserved” during evolution.

And it has important implications because when cell-cycle checkpoint genes go bad, cell growth can proliferate to cause cancer.