Annual Sociology and U event will raise money for scholarships.
Clare Duignan

Luis Novoa describes himself an artist and poet, but where Novoa sees himself in the future is in a much more traditional space: a classroom.

Novoa, a sociology major, wants to be a high school teacher — a goal inspired by the example of Matt Bradley, a former U professor, co-founder of Mestizo Arts & Activism and teacher at Cottonwood High School’s AMES program. Bradley passed away four years ago.

“He was my mentor and I always looked up to him,” Novoa said. “He was always working with youth and I think that is critical work and I’d like to follow in his footsteps.”

Achieving that goal is now closer to reality for Novoa, one of six students who received Sociology Community Scholarships last spring, the first allocations from the fund. 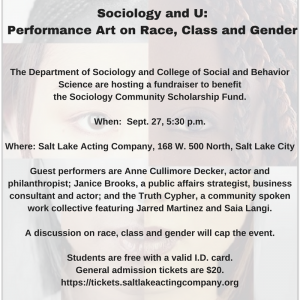 “This definitely pushed me to not take another semester off, take a full schedule and finish strong,” Novoa said, who has had to take breaks during his academic career to earn money to pay for his education and assist his family.

The funding makes all the difference for Novoa and the other recipients in being able to continue their educations.

“It allowed my last year of schooling to be much easier financially on me and my family,” said Stay. “The scholarship assists me in getting one semester closer to graduating and eventually being able to assist our communities in a profound way using the knowledge I’ve obtained at the U.”

The hope, according to Ming Wen, chair of the Department of Sociology, is to keep growing the scholarship fund so even more underserved students are able to pursue degrees in sociology.

Several of the students who received the initial scholarships are, like Stay, the first in their families to attend college. They include students from immigrant families and some from modest economic backgrounds.

But the most common characteristic is a shared passion about using their educations to better the world around them.

“I have this inherent burning inside me to use my voice and my education to speak out and fight for the individuals and communities who aren’t represented,” Stay said.

Danh, who was born in Utah and has Chinese and Vietnamese ancestry, was raised by a single mother who held two jobs to support him, his brother and his maternal grandparents. Danh began working at age 14 to help support his family but never lost sight of his goal to become a school counselor and academic/financial advisor.

Danh’s ultimate hope is to work in a career that allows him “to aid children and families who may have been in the same place as my family.”

Masih immigrated to Utah from Pakistan with family. Her parents were the “epitome of hard working” and set an example of never giving up, she said. Masih hopes to pursue a law degree and wants to serve the immigrant community, including the organizations that helped provide support to her family upon their arrival in Utah.

“I know what I must do to achieve my goals and how much effort I will need to put into [my education] so that I can prepare my application for law school,” she said.