Southern Utah, for all its rugged desert and natural beauty, is haunted by a nuclear history that goes back to the early years of the Atomic Age. In the 1950s, nuclear testing in Nevada created radioactive clouds that drifted into Utah, exposing the Downwinders who lived there. On Jan. 16, 2020, a seminar at the S.J. Quinney College of Law will explore the effect of this and other radiation exposure on Utah’s Native American population. The seminar comes at a time when a bill to expand government compensation to Downwinders and uranium workers is working its way through the U.S. Senate.

“This is not just a historical issue,” says Gail Blattenberger, emeritus professor of economics at the University of Utah. “The ramifications of the building and testing of nuclear weapons are still with us today.”

Beginning in 1951, the U.S. military conducted more than 900 nuclear weapons tests, 100 of which were aboveground, at the Nevada test site north of Las Vegas. Westerly winds carried clouds of radioactive fallout from the tests toward Southern Utah. People exposed to this radiation are known as Downwinders.

Native Americans’ radiation exposure was not limited to downwind fallout, however. Many worked in the mines and mills of the uranium industry. Abandoned mines and radioactive waste on Native American lands continue to impact the people living there.

“I was conscious of the impact on Native Americans,” says Blattenberger, a member of the Utah Coalition to Abolish Nuclear Weapons, which sponsors the Downwinder seminar series, “and I thought that Native Americans should be a focus of this event.”

Two panelists, Tara Benally and Robin Craig, will present at the seminar, which is free and open to the public. Benally, who was born Hopi and raised Navajo, is the Field Director of the Rural Utah Project. She will talk about all aspects of the nuclear industry’s impact on Native Americans, particularly within the Navajo Nation. Craig is the James I. Farr Presidential Endowed Professor of Law at the S.J. Quinney College of Law.  She is an expert on toxic torts and the author of “Toxic and Environmental Torts.” She will talk about the proposed expansion of the Radiation Exposure Compensation Act, a 1990 law that has paid out more than $2 billion in compensation to uranium workers and Downwinders.

“I’m hoping that attendees will be aware of the continuing effect of our involvement in a nuclear war,” Blattenberger says. “Even though they are not testing above ground now, there continue to be effects.”

Learn more about Nevada nuclear testing and the effect on Downwinders by visiting the Downwinders of Utah Archive at the J. Willard Marriott Library. 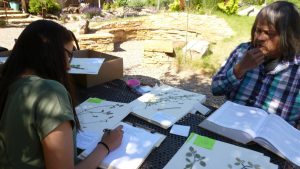