On Oct. 7, 1994, a natural dam failed, sending floodwaters of a glacial lake crashing downstream into the Bhutanese village of Punakha. The flood was devastating—it killed 21 people, destroyed 800 acres of crops, 6 tons of food, washed away homes, infrastructure and damaged one of the region’s sacred dzong fortresses.

In a new study that published in Science Advances on Sept. 16, 2020, scientists discovered that local seismic devices unknowingly recorded this glacial lake outburst flood (GLOF) five hours before it reached the village. GLOFs are a significant and growing hazard in mountain regions around the world as glaciers retreat in response to climate change. But tracking and studying these floods is difficult because of remote locations, vast number of potential floods and the expense of monitoring stations.

The authors show that seismic stations may provide a real-time, remote monitoring system to give early warnings to people in harm’s way. 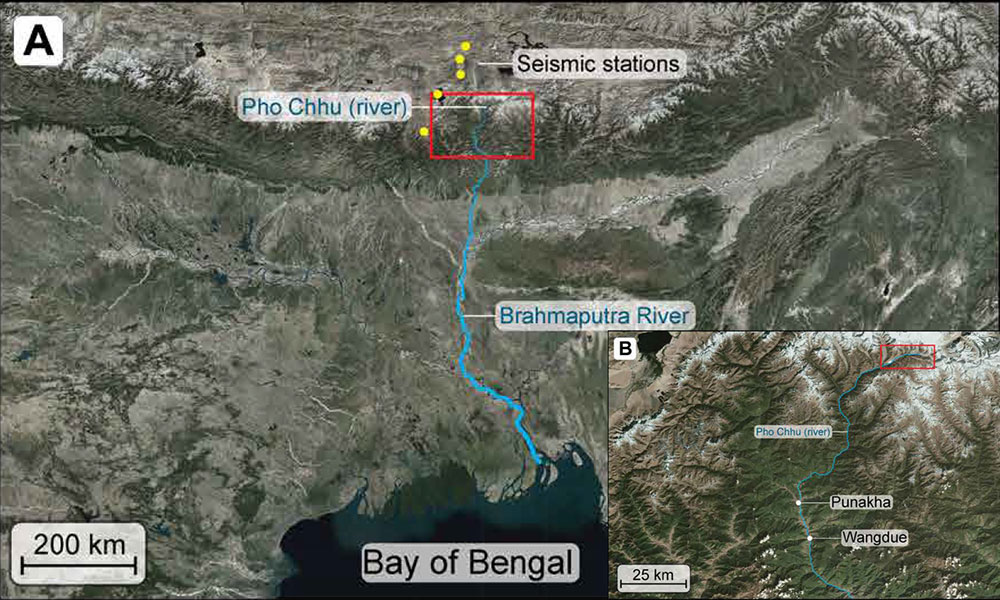 The larger map (A) shows the Pho Chhu river as it flows from the Himalayas into the Bay of Bengal. Seismometer locations are marked with yellow dots. The inset (B) zooms in on the area inside the red box in A, indicating the area where the glacial lake outburst flood began and the location of the village of Punakha 90 kilometers downstream.

As glaciers melt, the water pools into lakes trapped behind dams made of moraines, rocks and ice. When the dam shifts or excessive pressure builds, the lake water rushes out in a catastrophic burst, posing a danger to downstream communities. As the planet warms, glacial lakes are becoming larger and more common, thus increasing the risk for GLOFs.

“The floods are practically instantaneous—there’s almost no warning that the dam is going to breach. And there’s hundreds of these lakes in Bhutan alone, thousands in the Himalayas,” said Summer Rupper, geographer at the University of Utah and co-author of the paper. “In many places of the world, it is often the poor and marginalized that live in mountain settings. The most vulnerable are experiencing the biggest impacts of climate change. You have a flood that takes away your six cattle, that’s truly devastating.”

In the study, led by Lamont-Doherty graduate student Josh Maurer in close collaboration with Columbia University graduate student Josh Russel, researchers found that a seismometer array located about 100 kilometers from the glacial lake had recorded a clear high-frequency signal at approximately 1:45 a.m., around the time that the dam would have burst. They hypothesize that as the dam ruptured, the powerful and sudden outflow of water and/or sediments impacted the riverbed, causing the vibrations that were picked up by the seismometers. The team was able to use the seismic data to reconstruct the flood as it made its way 90 kilometers downstream, reaching the village of Punakha at around 7 a.m.

Currently, some systems monitor water level in glacial lakes and alert local communities if the lake level suddenly drops, indicating a GLOF. However, these systems are somewhat unreliable and have issued false alarms in the past. The study authors suggest that with some refinement, real-time seismic monitoring could be combined with water level monitoring systems to minimize false alarms and maximize warning times. In addition, a few strategically placed seismic sensors could potentially monitor for GLOFs over a large area.

The authors note that more research is needed before seismic GLOF monitors would be ready for deployment. The team hopes to find and explore other instances where seismometers have captured GLOF events, to better understand how to read and analyze the signals in real time. They also caution that the Punakha flood was very large, so the signal stood out clearly in the data; in the future, they hope to better understand whether the technique can reliably detect smaller glacial lake outburst floods, which can still cause severe damage. 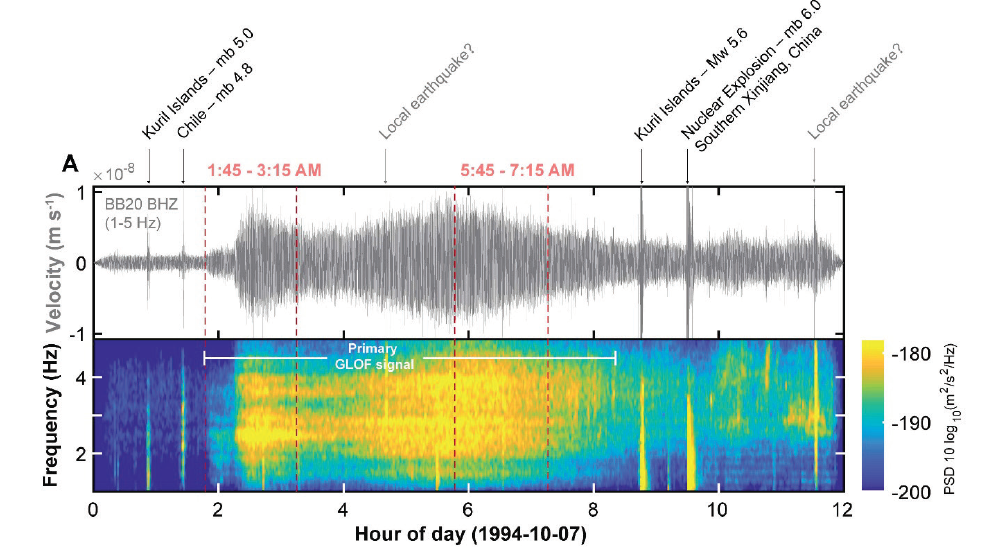 The tremors triggered by the GLOF and detected by far away seismometers: the initial outburst at 1:45 a.m., flood getting stronger at 2:15 a.m., and slowly tapering off after 7:15 a.m.

By reconstructing the Punakha flood, the researchers were also able to test various models of how flood waters would be expected to flow through the area, showing that seismic data could help to improve flood modeling. In addition, the paper also used satellite imagery before and after the GLOF to assess its impacts on the area.

“Anywhere glaciers retreat, more lakes can form and increase the potential for outburst floods. It’s true in the Andes, the Pacific Northwest, and all across the Himalaya,” Rupper said. “We’re a long way out from being able to use this as a warning system, but many of these places already have a network of seismometers in place. It would be amazing if you could utilize them to monitor outburst floods in real time.”

Other authors of the study include: Joerg Schaefer, and Nicolas Young from Columbia University; Norbu Wangdi from the Center for Water, Climate, and Environmental Policy in Bhutan; and Aaron Putnam from the University of Maine.

Learn more about the study in a brief Q&A with study co-author Joerg Schaefer, below.

How did the idea for this study first develop?

This all started when we were working on the well-preserved and nearly complete moraine sequences in front of the GLOF lakes. They were in the pathway of the 1994 GLOF, and beryllium dating shows that they are old, like 3,500 years old. I was puzzled as to how such a devastating GLOF could pass these old glacial landforms without destroying them, washing them out. I asked graduate student Josh Maurer to check the spy satellite imagery and the subsequent remote sensing images for pictures of the lakes and moraines just before and just after the flood. He did that, and we documented the outburst and early phase of the 1994 GLOF. We learned that the flood was just not super dramatic right at the start, and only took out a small part of the terminal moraine section. This is a striking and scary reminder that GLOFs starting at these high altitudes pick up their devastating energy by gravity on their way downhill.

Josh realized the potential, and we started to wonder if the GLOF signal should not be visible in the seismometer record. Josh got in touch with Josh Russell, a doctoral student in seismology at Lamont, and together they went to work and applied a technique called “cross-correlation based seismic analyses,” with which they could track the evolution of the GLOF with seismometers as far as 100 km away from the actual flood. They found the flood signal in stunning clarity and synthesized the seismic data with eyewitness reports and a downstream gauge station within a numerical flood model.

We also used the remote imagery before and after the flood to estimate the sediment deposition in the valley downstream to assess the damage, and traced the speed of vegetation recovery.

This is probably the most innovative earth science paper I have had the pleasure to be part of. Summer’s and my main role, after helping get them on a good path, has been to support the work of these brilliant grad students.

Did you encounter any obstacles in the development of this project? If so, what were they? How did you overcome them?

Josh and Josh encountered a variety of problems during their cross-correlation analyses, but they worked brilliantly and effectively as a team. Once all the results were on the table, it took us a while to organize the pieces from many different disciplines to form a coherent earth science manuscript, and to realize and formulate the potential of this technique for a new generation of GLOF early warning systems.

How do you think other glacial lakes could be prioritized for future research along these lines?

One of the biggest strengths of this approach is the regional applicability. We can use this toolkit, for example, to ask the seismometer record whether or not there are similar ‘GLOF-type signals’ in the system. And, using Josh’s satellite image processing techniques, we can search the region for the source of similar floods that might have occurred in the area over the last 40 years.

Being able to track the formation, growth and in particular increase in lake level over time is the key to evaluate and identify the most hazardous lakes in the region. Topography and sediment availability are probably similar across different GLOF-prone valleys in the region, but we should absolutely produce a map highlighting human settlements and areas that are key to their livelihoods in relation to the GLOF hazard from higher up in the Himalayas.