As a child, loneliness dogged Julia Ludlow like an unwanted shadow. She’d inherited the depression and anxiety that had marked her grandparents’ and parents’ lives, and she could never figure out how to reach out to other children. Afraid of meeting new people, she’d hide behind her parents’ legs.

When she was 12, her one and only friend moved away and Ludlow struggled with a renewed sense of isolation. She felt like garbage and couldn’t articulate why. She wasn’t doing poorly at school—she had A and B grades. Yet when she rode on the school bus, she’d shelter from its social chaos behind headphones; at night, she’d remain hermit-like in her bedroom, crying in confusion at not knowing how to think or how to feel.

It wasn’t until seventh grade that Ludlow made a new friend, Harli Holmes, in Spanish class. Holmes would poke Ludlow in the side, opening up her world with light-hearted ways and movie-obsessed chatter. After feeling invisible for so long, someone finally saw Ludlow. The friendship couldn’t have come at a more crucial moment.

On November 19, 2015, Ludlow felt sick and wanted to stay home from school, but her mother insisted she go. To her mother, with whom she often clashed, it was just one more fight. But not for Ludlow. Something broke inside her. “I’m done,” she thought. “I don’t want to live anymore.”

She took an Altoid mint tin and filled it with Tylenol pills. (Acetaminophen, a key ingredient in the pain pill, can prove deadly if too much is taken; in excess, it can severely damage the liver). Ludlow had her own spot at school, an alcove where she could sit and not talk to anyone. She got a glass of water at the cafeteria, took six pills, then realized she’d need more water. “Crap,” she thought. As she hurried to the cafeteria, she fixed her eyes on the floor, hoping to get back to the alcove without being stopped. It was then that she ran into Holmes. Her friend babbled on until Ludlow suddenly burst into tears.

“Are you O.K.?” Holmes asked. She’d known Ludlow had had some problems but thought she was coping better. 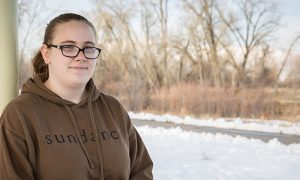 Julia Ludlow at her favorite childhood park near her northern Utah home.

In between sobs, Ludlow told Holmes her plan and showed her the Altoid tin. Although her suicide attempt had taken just a few seconds, to Ludlow it felt like a lifetime. Holmes put her arms around her. Then she took Ludlow to the school counselor, something they’d been taught in classes as part of the student response team—effectively the eyes and ears of school staff when it came to struggling students. Ludlow’s devastated parents watched her fill out a mental evaluation form at the counselor’s request. ”When I checked the box that said I wanted to kill myself, the fear on my parents’ faces was something I’ve never seen before,” Ludlow says.

What’s driving the crisis, argues Utah State Senator Daniel Thatcher (R-Tooele), is fear. “The reason we’re seeing such an epidemic right now is we’ve neglected this issue for so long because people are afraid to talk about it,” Thatcher says.

While teen suicide has been a problem for a long time, “It’s just gotten much worse with all the social media and the cyber bullying,” says University Neuropsychiatric Institute (UNI)’s veteran executive director Ross Van Vranken. “It used to be you’d go to school and be bullied during the day. Now it’s 24/7 if somebody wants to do that.”

One response to this crisis was the state’s January 2016 launch of SafeUT, a student safety reporting mobile phone app. The unique online tool, which offers immediate help via text chats and phone calls from licensed UNI counselors for students in crisis and those concerned about them, has pulled back the curtain on the dire level of need for increased mental health resources in Utah. That’s apparent in the never-ending rise in demand for its services: in 2016, there were 3,924 tips and chats with troubled students regarding school safety and mental health issues; by fiscal year 2018, that had skyrocketed to 30,474.

If you or someone you love is struggling, the National Suicide Prevention Lifeline (1-800-273-8255), provides free 24/7 crisis response assistance to individuals experiencing emotional distress or psychiatric crisis. If you are a current Utah student, educator or parent, please download the SafeUT app today. Both services are staffed by University of Utah Health licensed crisis clinicians.