This weekend's red-white game is a chance for borderline players to prove themselves worthy of playing time come fall, for younger players to turn heads and make an immediate impact and for first-teamers to gel in the system and hone the playbook.
Andy Thompson

Like the surprise April snowstorm that offers respite to Wasatch powder hounds, Saturday’s annual Red-White game gives Utah fans a taste of the world-class football in store for autumn at Rice-Eccles Stadium. The always tasty Ultimate Tailgating Championship, the MUSS flag-football game and the Utah football alumni game are on the menu beforehand, in what coalesces into one of the most anticipated spring events on campus.

The game that matters (well, kind of) begins at 1 p.m., as coach Kyle Whittingham and his staff divide up the squad and assign red and white jerseys. It’s a chance for borderline players to prove themselves of playing time come fall, younger players to turn heads in their quest to make an immediate impact, and for first-teamers to gel in the system and hone the playbook.

One of this spring’s storylines is at quarterback. Travis Wilson has started 28 games for the Utes over the past three years, and while it hasn’t always been pretty, he’s won big games and seems entrenched at the top of the depth chart. Kendal Thompson, who showed flashes of brilliance in road victories versus UCLA and Oregon State last year, could push Wilson for the No. 1 spot, but is currently recovering from an ACL injury. The QB who has received the most amount of attention this spring, and who will have a lot of fans buzzing during the Red-White game, is freshman Chase Hansen.

The four-star recruit out of Lone Peak High School returned from his mission in winter and has separated himself from the other three quarterbacks competing for the No. 3 job. He is technically No. 2 on the depth chart with Thompson out for spring camp. His ability to both pass and run is what makes Hansen an intriguing talent. It’s a combination that caused safeties coach Morgan Scalley to tell the Deseret News this: “If you miss a tackle on him, watch out. Just one of those deals where, if you have a kid who can run, and can make moves (like) a running back, he is improving day after day with his throwing. All I know is that he looks like he’s making plays.” 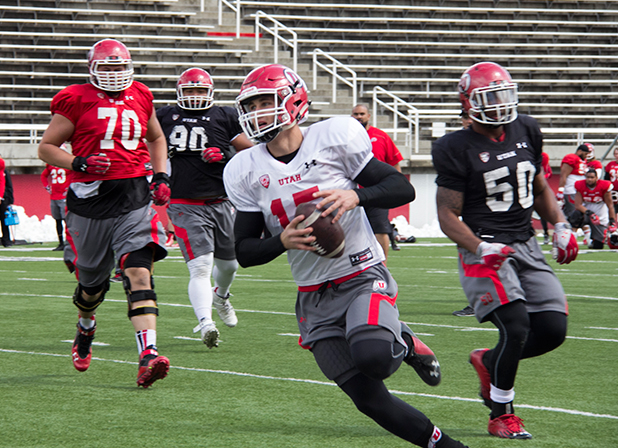 While the offense has eight returning starters, it’s a different story on the defensive side of the ball, which lost standouts and NFL prospects Nate Orchard, Eric Rowe and Brian Blechen to graduation. Former quarterback Jason Thompson (you may remember him for his part in the double-reverse flea-flicker on the first play of the Las Vegas Bowl) made the switch to safety and could be one the season’s starters at the position. A strong linebacking corps featuring Gionni Paul, Jason Whittingham and Jared Norris returns. And defensive end Hunter Dimick, one of the leading citizens of last year’s “Sack Lake City” contingent, will also be back.

All in all, Utah Football has the recipe for continued success in 2015, for which an hors d’oeuvres helping will be on hand Saturday.