This article originally appeared in Continuum in Fall 2017.

In early 2005, when the U.S. government was desperate to prove that Iraq could hold an honest national election, Kael Weston HBA’96 was serving with the State Department in sprawling Anbar province. Weston was 33 then, a University of Utah graduate who hoped for a long career as a diplomat. 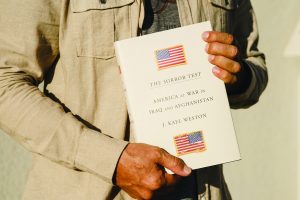 Weston’s 2016 book, The Mirror Test, provides an unflinching look at the costs of going to war.

He had been assigned as a political adviser to the Marines, and on this January day he and the Marines were faced with a dilemma. Word on the street was that Sunnis would boycott the election, but, as Weston pointed out, if polling places weren’t provided in isolated areas, Sunnis could claim the vote was unfair. The question on the table was whether Marines should be helicoptered out to provide election support that the Iraqis couldn’t afford. Finally, after top Marines argued against the move, Weston was told: “It’s your call.”

A few weeks later, an election-support helicopter carrying 30 Marines and one Navy corpsman to a remote Anbar town crashed in the desert.

It’s not guilt Weston feels but accountability, so the 31 deaths are a thread that runs through The Mirror Test, his 2016 book that provides an unflinching look at the costs of going to war.

The book is a memoir about Weston’s seven years in Iraq and Afghanistan. It is also, unapologetically, his indictment of President George W. Bush’s decision to invade Iraq.

The book’s title refers to that moment when someone—a soldier perhaps who has lost lips, ears, a nose in a roadside blast and has undergone multiple surgeries—is finally willing to look in the mirror. It’s a metaphor, of course. “When we look into that mirror,” he writes about the rest of us, “let’s not turn away.”

Immediately after the late 2004 Battle of Fallujah, the most deadly battle in the Iraq War, Weston was sent to a makeshift morgue the Marines had set up in a potato factory, where decomposing Iraqi bodies retrieved from the city’s ruins were kept in coolers and then put in body bags. The body count eventually reached 1,052, mostly Iraqi insurgents but likely also civilians who had not evacuated the city. The Marines buried the bodies in what was essentially a mass grave.

And then came the questions from Fallujah’s leaders. Were the bodies properly buried? Was it true that dogs had carried some away? Families were intent on digging up the bodies, finding their missing kin, and burying them facing Mecca. It’s at a time like this when a friendly, straight-talking American in blue jeans can maybe make a difference.

Weston arranged a meeting with Sheikh Hamza Abbas al-Isaawi, Fallujah’s grand mufti, by then a close contact in the war-torn city. “Please tell them we are treating the remains with respect,” Weston asked the religious leader, hoping to avert a large-scale disinterment or protest. After a long silence, Hamza replied. “I will tell people to stay away. I trust you.” 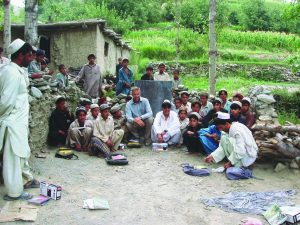 Weston participating in an outdoor classroom with students in Khost Province, Qalandar District, Afghanistan, in 2008.

Weston eventually became known among the locals as Kael al-Falluji (Kael the Fallujan). It wasn’t a title bestowed lightly, says Saad Manthor, a Fallujah policeman. “Kael was a special guy,” a man who listened and spoke to everyone, Manthor explained recently in an email from Fallujah.

Weston ended up spending almost three years in the city, as the situation there improved, then deteriorated. Here’s an image retired Marine Lt. Col. Patrick Carroll remembers: Weston walking, unarmed, day after day, to the Police Station or City Council building, across the same couple hundred yards where two Marines had recently been shot by snipers.

“He was eager to engage everybody, people who agreed with us and people who didn’t,” remembers Lt. Gen. Larry Nicholson, who worked closely with Weston in both Iraq and Afghanistan. “He would wade right in.”

And he wasn’t afraid to question the strategies of the colonels and generals, Nicholson adds. “It was good to have someone always ready to speak truth to power.”

In high school, in Utah County, Weston hung maps of the world on his wall, watched history shows on PBS, and was thrilled when his parents invited foreign students to dinner. “What I liked was being in a room with people who had unpredictable things to say,” he remembers. “There was a lot of ‘same’ in Orem, and I guess I was looking for something different.”

Kael is the take-charge one, says his twin, Kyle, who remembers that more often than not it was 3-year-old Kael who got to sit on the tricycle seat while Kyle pushed. Kyle calls his twin “the pragmatic one who likes to get things done,” the one who “likes sitting around a table working toward a consensus.”

“Kael’s great quality is compassion,” says Prof. John Francis, a mentor since the 1990s, when Weston majored in political science (with a minor in history) at the U. “On the one hand he’s hard-headed, able to survive under challenging conditions, but that’s combined with a sort of innocence of believing the best about people.”

After getting a degree at the U, Weston got a master’s from England’s Cambridge University. Following a year as a Fulbright Scholar in Amsterdam, he passed the State Department’s Foreign Service exam and took a job in the U.S. Mission to the United Nations, where he served on the Al Qaeda and Taliban Sanctions Committee. He was in the UN Security Council chamber in 2003 when Secretary of State Colin Powell made his game-changing speech arguing that Saddam Hussein had weapons of mass destruction.

Weston thought Iraq was “the wrong war” (and points out that the war initially had bipartisan support). Despite his misgivings, he was ready to represent the U.S. in Baghdad, arriving in the summer of 2003. But he soon discovered that the administration had entered Iraq unprepared to run a country left leaderless after Saddam was toppled.

State Department officers sent to outlying areas, as Weston was, are expected to send frequent cables back to the embassy, assessing the situation. Weston wanted to make sure his included Iraqi voices, and he didn’t shy away from, say, the smell of rotting bodies at the potato factory.

You hope, he says, that your cables might affect policy. But the more realistic aim was to make a tactical difference on the ground. There was, for example, the case of Sara al-Jumaili, a young woman from a prominent Sunni tribe who was twice detained by an Army Delta Force team, enraging Fallujans to near revolt. The Delta Force squad had swooped into town in their Black Hawk, blindfolded her, bound her hands, and then flown away with her to question her about her connection to Abu Musab al- Zarqawi, Al Qaeda in Iraq’s self-proclaimed leader.

Click here to read the rest of the story. 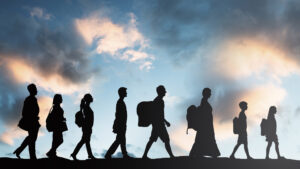