Six months. That’s how long patients suffering with chronic, and sometimes debilitating, pain were told to wait at the U’s headache clinic. The seriousness of the situation was not lost on clinic staff, but for years a solution had eluded them, until now.
Janelle Hanson

This article originally appeared in Algorithms for Innovation. 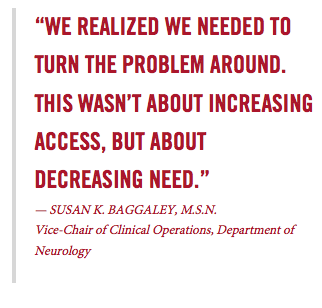 Six months. That’s how long patients suffering with chronic, and sometimes debilitating pain, were told to wait at our headache clinic. “Let’s face it, people in pain can be painful to treat, especially for time-strapped primary care providers,” says headache specialist Susan Baggaley, “Patients come in for a physical and say, ‘Oh, and by the way, I also have splitting headaches.’” The path of least resistance for providers, who on average receive three hours of headache training in medical school, is to write a prescription and recommend that patients get in line, a very long line, at the headache clinic. Desperate to help alleviate pain, providers often prescribe opiate drugs, which are not only addictive, but can also worsen migraine headaches.

The seriousness of the situation was not lost on the small staff at the headache clinic. For years a solution had eluded them. Headache is considered an epidemic and neurologists are in short supply.

When migraine researcher K.C. Brennan received an email announcing a round of “Lean Projects” last fall, he and Baggaley quickly signed up. The six-week process improvement course paired them with a “value engineer” and gave them structure and a deadline. It also opened up access to system resources they’d never had before. They queried the data warehouse to see how headache patients were moving through the system and after studying 50,000 encounters coded as “undiagnosed headache,” they discovered four out of five patients were prescribed a controlled substance. “We were making disease instead of healing it,” says Brennan.

Increasing capacity to meet the overwhelming demand wasn’t an option. “We realized we needed to turn the problem around,” says Baggaley. “This wasn’t about increasing access, but about decreasing need.” Instead of approaching their primary care colleagues with an “it’s-your-problem, you-fix-it” attitude, they built three simple questions into the electronic health record that helped diagnose headache and created corresponding treatment protocols. “Doctors are algorithmic,” says Brennan. “We just need to empower them by giving them a tool.” They also embedded an enthusiastic primary care doctor, Karly Pippitt into the clinic to triage patients and support colleagues with phone consults.

Six months after launching the project there was a 20 percent reduction in the misdiagnosis of migraines, a 7 percent reduction in opioid prescriptions and a four-month reduction in wait times for patients referred by primary care providers within our system. “We have plenty of access,” says Michael Magill, chair of family and preventive medicine. “We’ve just clogged up our clinics with patients who don’t need to be there.”

“No one mandated we do any of this,” says Brennan, “but the institution created an opportunity for us to work on a problem we’d been concerned about for years and provided the resources we needed to solve it.”