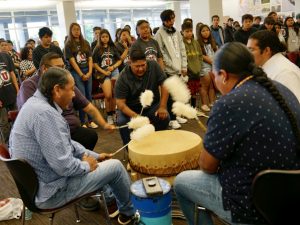 For the first time in its nine-year history, the Tri-Ute Youth Leadership Conference was hosted by the Northern Ute tribe on the U’s campus. This unique event connects high school students from all three Ute tribes—Northern Ute, Southern Ute and Ute Mountain Ute—for three days of cultural celebrations, leadership training and exposure to higher education.

Education directors from the three tribes created the conference as a way to bring their youth together and introduce them to the many college and university opportunities in the state. The event is free for the students and a chance for them to gain skills and confidence that could change the course of their lives, according to LaTitia Taylor, director of education for the Southern Ute Tribe.

“We wanted our kids to get to know each other and build relationships, as well as to think about careers and different options that they have off of the reservations,” said Taylor. “Maybe one day these students will be leaders within our tribes who are able to hold onto our culture while working with other communities to make our lives better on the reservations.”

After having their culture outlawed for many years, tribal leaders recognize the vital role that young members play in revitalizing cultural continuity and stability. This youth-driven conference is an effort to keep their culture and traditions alive for future generations.

“The only way we can preserve our cultures, languages and traditions is to teach them to our children,” said Franci Taylor, director of the American Indian Resource Center at the U. “If the youth don’t learn them, these things disappear.” 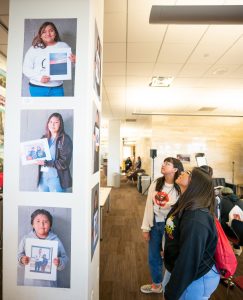 At the Tri-Ute Conference, about 80 Ute youth tribal members meet and befriend one another, often meeting cousins for the first time.

“We don’t get to see our sister tribes a lot since we live pretty far apart, so this conference is a great chance to interact with the people who have the same struggles and that we can really relate to,” said Timinainisa Powaukee, a Northern Ute tribal member and recent high school graduate.

This was Powaukee’s second and final Tri-Ute Youth Leadership Conference since she has graduated from high school. She says she plans to attend the U in the fall and hopes to stay involved in the conference as a chaperone.

This year was also an opportunity for the Northern Ute tribe to introduce students to the university that proudly bears its name for athletics.

“It’s really exciting and meaningful to be here and to have our culture and our language be seen here on campus,” said Amber Boswell, education apprentice for the Southern Ute Tribe. “You don’t get to see that with many other sports teams and colleges that use some of our names and symbols, so it means so much to see the university’s efforts toward considering our culture and getting to know us even more so we can continue building that relationship.”

The students were welcomed to campus with an opening ceremony inside the Marriott Library, followed by a scavenger hunt that allowed them to explore much of the campus. Throughout the three-day conference, the high schoolers participated in several workshops where they were able to interact with university faculty and staff and create artwork. 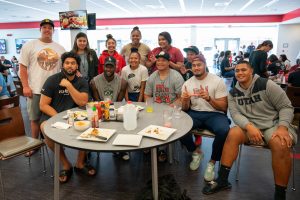 They met with Utah football coach Kyle Whittingham and some of the players, and even hosted a Bear Dance on Stillwell field—the first Bear Dance to be performed on the Wasatch Front.

“We do a program on the reservations where we give elementary students a University of Utah sweatshirt for having perfect attendance,” said Martha Macomber, educational coordinator for the Ute Tribe at the U. “Then they get used to being recognized and look forward to that awards assembly as they get older and go through middle school and they love the logo and the fact that the U is involved.”

Macomber says it was especially meaningful to have the Tri-Ute Conference at the U because it shows how far the university’s relationship with the tribe has come.

“It’s been incredibly important to us to ensure that our relationship with the tribe is really an authentic partnership,” said Macomber. “We want to listen and work alongside one another rather than try to insert ideas of how to change.”

The Tri-Ute Youth Leadership Conference is held every other year. The Ute Mountain Ute tribe will be the next host in 2021.