It’s been established that having multiple sex partners prior to marriage sometimes leads to less happy marriages and  increases the odds of divorce. But sexual attitudes and behaviors continue to change in America, and some of the strongest predictors of divorce in years gone by no longer matter as much as they once did, according to new research by Nicholas H. Wolfinger, a professor in the University of Utah’s Department of Family and Consumer Studies and an adjunct professor in the Department of Sociology.

In new research published online today on the Institute for Family Studies Blog Wolfinger identified several interesting trends: Divorce rates have fallen for the shrinking percent of American women who marry as virgins, and stayed essentially the same for those with one or two premarital sex partners.  Divorce rates went up the most for women with 10 plus sexual partners before marriage.

But the surprising thing, Wolfinger said, is that women with exactly two premarital sex partners have consistently higher divorce rates than women with three to nine partners.

“In short, if you’re going to have comparisons to your [future] husband, it’s best to have more than one,” said Wolfinger. He added that sexual behavior has changed significantly throughout recent decades.

“How has sexual behavior changed in recent years? Most answers to this question involve hooking up, the idea that young people are having sexual encounters outside of committed relationships. It’s almost beside the point that millennials tend to have fewer sex partners than people born in the 1950s and 1960s. Public perceptions emphasize youthful licentiousness, and today’s young adults do have lengthier sexual biographies than do people born prior to 1950. Still, the extent of hooking up has been exaggerated by a prurient and overheated media and sometimes by young people themselves,” Wolfinger said.

Wolfinger has long been a voice in the national conversation about trends in marriage and divorce. In 2005, he published “Understanding the Divorce Cycle” (Cambridge University Press),  which showed that the transmission of divorce between generations became weaker as divorce grew more common.

For his latest research, he explored whether the same trend would happen with respect to sexual behavior.

The answer appears to be no. His research explores the changing relationship between premarital sex and divorce using data from the three most recent waves of the National Survey of Family Growth, collected in 2002, 2006-2010 and 2011-2013.

Research by Wolfinger found that overall, young women who tied the knot in recent years have far more sexual experience prior to marriage than their counterparts from prior decades.  Women were four times as likely to marry as virgins in the 1970s (21 percent) compared to the 2010s (5 percent), according to the researchers.

“Overall, American women are far more likely to have had multiple premarital sex partners in recent years,” Wolfinger said. “As premarital sex became more acceptable, it’s reasonable to anticipate that its negative effects on marital stability waned.  In general, Americans became more accepting of nonmarital sex. Certainly fewer men entered marriage with the expectation of a virgin bride.  All of the fanfare associated with hooking up is evidence that some young people have become comfortable with the idea of sex outside of serious relationships.”Wolfinger used the data to examine the percentage of marriages ending in divorce within five years of wedlock. He analyzed the data according to the decade the wedding took place and how many sex partners a woman had prior to marriage. He found in some instances, those with fewer sex partners were less likely to divorce.  However, he also observed considerable differences.  For all three cohorts, women who married as virgins had the lowest divorce rates by far.  Eleven percent of virgin marriages (on the part of the woman, at least) in the 1980s dissolved within five years.  This number fell to 8 percent in the 1990s, then fell again to 6 percent in the 2000s.  For all three decades, the women with the second lowest five-year divorce rates are those who had only one partner prior to marriage.Wolfinger’s data revealed that in the 1980s and 1990s, the highest five-year divorce rates were reserved for women who had two partners.  The effect was particularly strong in the 1980s, when these women had divorce rates of 28 percent, substantially higher than those of their peers who had ten or more sex partners prior to marriage (18 percent).The highest five-year divorce rates of all are associated with marrying in the 2000s and having ten or more premarital sex partners: 33 percent.“Perhaps it is not unexpected that having many partners increases the odds of divorce.   The greater surprise is that this only holds true in recent years; previously, women with two partners prior to marriage had the highest divorce rates,” said Wolfinger. 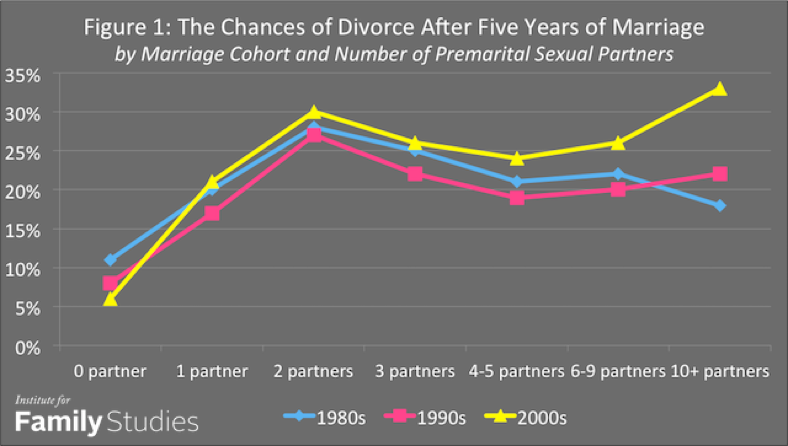 He noted a number of factors that contribute to the trends, including cultural and religious beliefs. To read the full study, click here.