Hurricane Maria’s devastation of Puerto Rico last September, which left nearly all the island’s 3.4 million residents without power, is one of the most frightening scenarios for a metropolis: A natural disaster or cyberattack wipes out a city’s power grid. 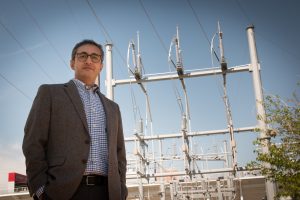 University of Utah electrical and computer engineering assistant professor Masood Parvania has received a $2 million grant from the Office of Naval Research to build a new laboratory and develop technology that would help communities get their power back online faster in the wake of a natural disaster or cyberattack.

But University of Utah electrical and computer engineering assistant professor Masood Parvania is building a new laboratory to develop technology that would help communities get their power back online faster in the wake of those kinds of devastating events.

He was awarded a three-year, $2 million grant from the U.S. Navy’s Office of Naval Research beginning July 1 to build the lab and research and test technology for microgrids–smaller, more localized versions of a city’s power grid that could provide backup electricity in a catastrophic situation.

When a natural disaster hits, much of a city’s power grid that receives electricity from sources such as thermal and hydroelectric plants, can go dark.

Microgrids are power systems in smaller areas of a city that operate autonomously from the main grid and get electricity from sources like solar panels or energy storage devices. They can provide emergency power to neighborhoods and essential services such as hospitals until the main system is restored. Microgrids can be as small as a building like a college campus or military base that use backup generators, or a large neighborhood that uses wind turbines or geothermal generation. Microgrids, for example, are now being created all over Puerto Rico in the event of future massive power outages.

Parvania and his team at the Utah Smart Energy Lab (U-Smart) will be developing microgrid controllers that act as the computerized brains of a microgrid and determine how to best distribute electrical power in an area. These controllers will be faster, smarter and more secure from cyberattacks, the newest concern for power companies. Two days before Christmas in 2015, for example, Russian hackers remotely attacked the control centers of three Ukrainian electricity distribution companies, briefly wiping out power to more than 200,000 customers.

“Today, power grids are becoming more and more vulnerable with modernization and digitization,” Parvania says. “These microgrid controllers will be faster and more accurate in returning power back to communities. But we also want to make sure that once they work they are not affected by cyberattacks.”

Parvania’s laboratory, which will be built on the University of Utah’s College of Engineering campus, will consist of software and specialized computers called “real-time digital simulators” that will simulate a power system. New technologies that his team develops can be experimented on this new testbed. The laboratory also will be used to help educate the next generation of power engineers who are studying microgrids.

Another component of the research grant involves commercializing any technology that Parvania’s team develops. The University of Utah is partnering with the Utah Science Technology and Research (USTAR) initiative, Governor’s Office of Energy Development, Idaho National Lab, and the U’s Office of Technology and Venture Commercialization.

“We are also going to work with utilities, energy companies, and military bases to see how we can commercialize our technology for the betterment of communities,” says Parvania. 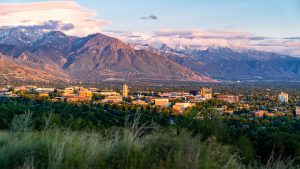