One U grad’s high flying career

U alumna Jaclyn Arduini sets up and tears down her rehab clinic in a new city every week as the athletic therapist for Cirque du Soleil.
Bill Keshlar - College of Health, University of Utah

Last year, University of Utah alumna Jaclyn Arduini was backstage at the Maverik Center in West Valley City, home of the Grizzlies, the minor league affiliate of the professional hockey team Anaheim Ducks. She was watching circus magic, but her professional focus was the same as it would’ve been anticipating a full-body check.

She was there to treat and rehab the results of all-too-predictable consequences, then pack up her possessions—including the tools of her trade, 10 shirts that she wears on rotation, a tea kettle and a collapsible bike—into two 50-pound suitcases and hit the road. 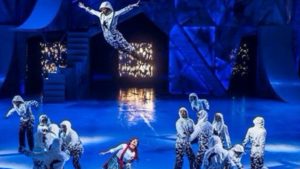 For much of the past 16 months, Arduini has been working as an athletic therapist with Cirque du Soleil’s latest touring production, “Crystal.” The show completed its North America tour at the end of last year, and continues production into 2020 with tour dates in Russia, Latvia, Poland, Belarus, Ukraine and the United Kingdom.

Billed as unique in the company’s 35-year history, “Crystal” takes place completely on ice, featuring performances that combine circus acts with breathtaking acrobatics and ice skating. “Crystal” travels to a new city every week, which means that every few days Arduini tears down her clinic and rehab space in one arena, only to set it up again in another.

From thinking of teaching to joining the circus

After completing undergraduate degrees at Sheridan College, just outside of Toronto, Arduini had her eye on a master’s degree program—exercise and sport science with an emphasis in athletic training—at the University of Utah.

“I thought I’d end up teaching,” said Arduini, who completed the degree in 2016. “Stay with traditional sport. That’s all I’ve really ever known.”

She’d tap expertise as a practitioner in performance medicine gained through working with team sports at the University of Utah, lacrosse and hockey, plus modern dance and ballet. She also served as a guest lecturer in the university’s undergraduate athletic training program, delivering lecture and lab material on topics such as therapeutic massage and the principles of clinical assessment.

The degree program offered through the University of Utah’s Department of Physical Therapy and Athletic Training opened doors to a world of elite-level athletic performance she vaguely knew existed but never really considered. One of those doors led to the circus.

Behind the hypnotic illusions and the derring-do of nationally ranked figure skaters and acrobats creating a story with the girl-power appeal of “Mean Girls” meets “Frozen” meets “Wonder Woman” is a Las Vegas-style circus troupe whose performances of “Crystal” require first aid, injury assessment and management, supervision of rehabilitation and recovery.

Arduini signed up after talking to recruiters from Cirque du Soleil at the 2016 National Athletic Trainers Association Convention in Baltimore where she was giving a poster presentation. They strongly encouraged her to apply for a position.

“They were very approachable,” Arduini said. “They said, ‘Oh, your background really fits what we’re looking for.’”

They were talking about her work with dance majors, but also going through a program that outside the classroom gave her experience in multiple sports and an ability to adapt to a rigorous workload: 11 months on the road; a city per week; flying or busing along with 100 athletes (as part of the circus, they’re artists) and technicians Arduini calls family.

“I am very lucky. I use what I learned at the University of Utah every single day,” she said. “Some degrees aren’t like that.”

The way injuries happen in the circus and other performing arts is different than in sports. But the injuries are essentially the same: Knee and ankle strains and sprains; shoulder, wrist, finger and hand injuries. Pretty much everything you’d see on a football or soccer field.

“Just because the athletes are in the performing arts doesn’t make them any different in respect to how we treat their bodies. The rehab and techniques are all the same,” she explains. Traveling with the show means that Arduini is familiar with the artists’ bodies and weak spots, just as she would be with any sports team she’s worked with over multiple seasons.

What does vary, however, is the physical strain that can come from an artist’s arduous performing schedule. Arduini sees more chronic injuries in circus performers and needs to sometimes adapt her care to make sure that an artist can continue to get better while still performing to the best of their ability.

“We do modify performers’ levels due to injury, but we do try very hard to make sure they’re able and capable of doing what they need in the show,” she says. “It’s a bit different from treating a football or basketball player because every day is game day…you’re always preparing for a performance.”

A background in athletics

Arduini did not attend Sheridan College or the University of Utah to run off and join the circus, however. Her eye was on a job in a college environment (and it still is). The athletic training program at the University of Utah opened an unexpected option that would enhance future career opportunities. “You just have to keep your mind open. Never turn down an opportunity to talk to someone.”

“I was really attracted to the enthusiasm of all the folks at Cirque du Soleil,” she said. “I think they were looking for someone different, and my resume is very different. A lot of people will pick one sport and stick with it, but I purposely have never picked a focus. It was great to find a company that knew all these sports experiences would translate into circus disciplines.”

Arduini spent a year in Las Vegas as a resident therapist with Cirque du Soleil’s “O”—a water-themed production that has been in permanent residence at the Bellagio resort since 1998. Many Cirque du Soleil newbies spend their first year at a resident show, giving them the opportunity to learn the ins and outs of the circus and how to work within a performance environment.

From there, Arduini joined “Crystal” at the production’s inception in 2017, working with the technical team and the Performance Medicine Department at Cirque du Soleil’s headquarters in Montreal to determine show coverage and treatment. Arduini helped develop the show’s emergency action plans and rescue procedures—a set of protocols to determine what can be done on stage should an artist be injured during a performance, and how to escort them safely off stage.

“Building this show from literally an empty ice rink was a very challenging and rewarding experience all at once,” she says. “And being able to see it straight through to 600 shows has been incredible.”