Nobel laureate Mario R. Capecchi, Ph.D., the University of Utah human geneticist whose daring idea of “knockout” mouse technology revolutionized the study of mammalian biology and disease, and Vivian S. Lee, M.D., Ph.D., M.B.A., the university’s senior vice president for health sciences who is at the forefront of health care reform and is a widely acclaimed educator, researcher and practitioner of radiology, have received the rare honor of being elected to the National Academy of Medicine (NAM).

NAM announced on Oct. 19 that Lee and Capecchi were among 70 new U.S. members and 10 international members elected in the class of 2015. Originally called the Institute of Medicine, NAM was established in 1970. This past July its name was changed to the National Academy of Medicine. Election to NAM is one of the highest honors in medicine. Active NAM members elect new ones from among candidates nominated for their outstanding professional achievements and contributions to service.

Lee and Capecchi’s unique contributions to medicine exemplify what election to NAM represents, said David W. Pershing, president of the University of Utah.

“Traveling different paths in the world of medicine, Drs. Capecchi and Lee each have made significant impacts on the lives of people everywhere,” Pershing said. “Whether it’s through research in the lab, or in the clinic and classroom, or by tackling health care reform through containing costs, they are truly among the leaders of modern medicine.”

Born in Verona, Italy, Capecchi overcame being separated from his mother by the Nazis, and then forced into a hardscrabble life on the streets of Italy during World War II, to become one of the world’s leading human geneticists. When he and his mother were reunited after the war, they came to the United States, where Capecchi graduated in chemistry and physics from Antioch College and then earned a doctorate in biophysics from Harvard. At Harvard, he studied in the lab of one of the co-discoverers of the structure of DNA, James Watson, who later shared the Nobel Prize for his work.

After several years on the Harvard medical school faculty, Capecchi joined the University of Utah as a professor of biology in 1973. He was attracted to the wide-open landscape of Utah and the surrounding Western states and says it helped open his thinking to big ideas.

When Capecchi, now a distinguished professor of human genetics and biology, sought money from the National Institutes of Health in the early 1980s, his idea for a process called homologous recombination was rejected as impractical. Undeterred, he kept at it, and several years later published a study showing that his innovation, which is a way to silence or knock out genes to study their functions in mice, worked. Since then, knockout-mouse technology has become a method for studying disease worldwide and has resulted in unprecedented gains in understanding illnesses ranging from human cancer to diabetes to heart disease. In 2007, Capecchi and two others who worked independently on different aspects of knockout technology, Oliver Smithies and Martin Evans, received the Nobel Prize in physiology or medicine for their accomplishments.

“It is an enormous honor to be elected to the National Academy of Medicine for my laboratory’s contributions to the medical sciences,” Capecchi said. “NAM does an outstanding job of supporting medicine and medical research for the betterment of the health and productivity of our nation’s people.”

Before joining the University of Utah, Lee served as a radiology faculty member and senior vice president at the NYU Langone Medical Center. She has published more than 160 peer-reviewed studies and continues her research as a principal investigator funded by the National Institutes of Health (NIH). She authored a popular textbook, “Cardiovascular MRI: Physical Principles to Practical Protocols,” and has been honored with several awards for her teaching. She served as president of the International Society for Magnetic Resonance in Medicine and chaired the Medical Imaging NIH study section. Lee graduated with honors from the Harvard Medical School and holds a doctorate in medical engineering from Oxford University where she was a Rhodes scholar.

“The National Academy of Medicine has provided critical thought leadership in health policy and academic medicine that has impacted the health of this nation and of the world,” Lee said. “I am honored to join this august body and look forward to the opportunity to contribute.”

Lee and Capecchi’s election to NAM brings the number of University of Utah-associated members in the academy to 23. The election of this year’s class brings the total number of NAM members to 1,826 from the United States and 137 others from around the world.

NAM comprises a diverse group of members from the fields of health and medicine, the natural, social and behavioral sciences and beyond to advise national and international communities on medical issues and questions. It serves alongside the National Academy of Sciences and National Academy of Engineering, which fill similar roles in their areas of expertise. 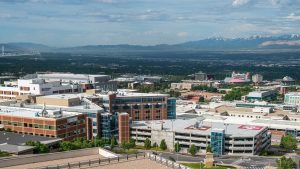