A dozen years have elapsed since U psychologist David Strayer published a study that concluded motorists who talk on cellphones suffer “inattention blindness” regardless of whether they use hand-held or hands-free devices.

Yet for many years, many people ignored Strayer’s bottom line message: The problem is mental distraction, not just manual manipulation of a phone or other devices. Laws were passed banning use of handheld cellphones for talking or texting, but allowing hands-free devices. Automakers put increasingly sophisticated (and confusing) voice-command systems in vehicles. 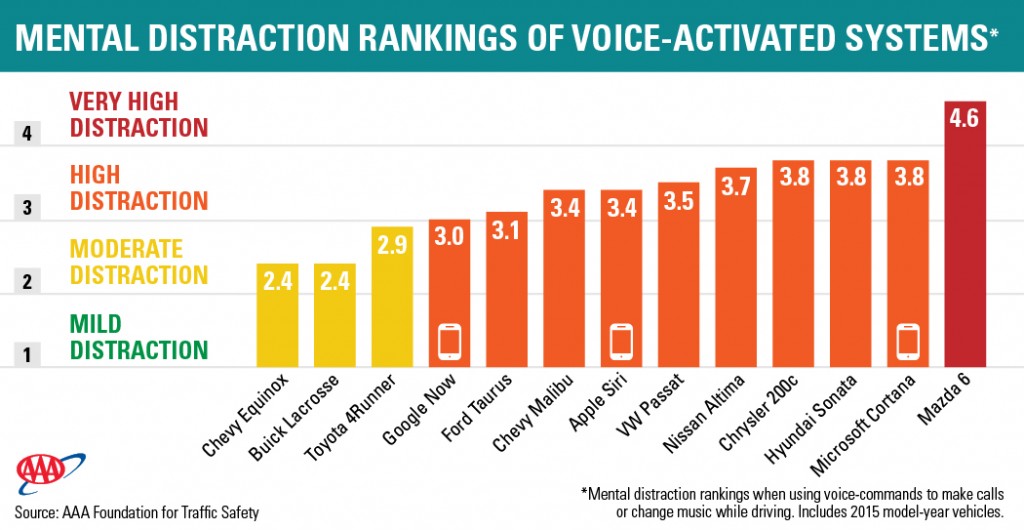 Now, after publishing a third set of studies in as many years with funding by the AAA Foundation for Traffic Safety, the message is beginning to get through: The mere act of talking to your smartphone or in-vehicle infotainment system is moderately to very highly distracting – depending on the device used.

The new studies by Strayer, psychologist Joel Cooper and their colleagues generated worldwide publicity that focused on their newest finding: Drivers remain distracted for up to 27 seconds after disconnecting from the phone or in-car information system. That was a surprise for lots of folks who avoid texting or talking while driving, but thought it was OK to do so at stoplights. Indeed, the new study meant that while driving at 25 mph, a motorist travels the length of up to three football fields before regaining full attention.

The two new studies also rated three smartphone personal assistants and 10 in-vehicle information systems on a distraction scale, finding most of them highly distracting. Some automakers already have contacted the U researchers about the results.

Click here for details of Strayer’s latest studies, and for links to the full studies.