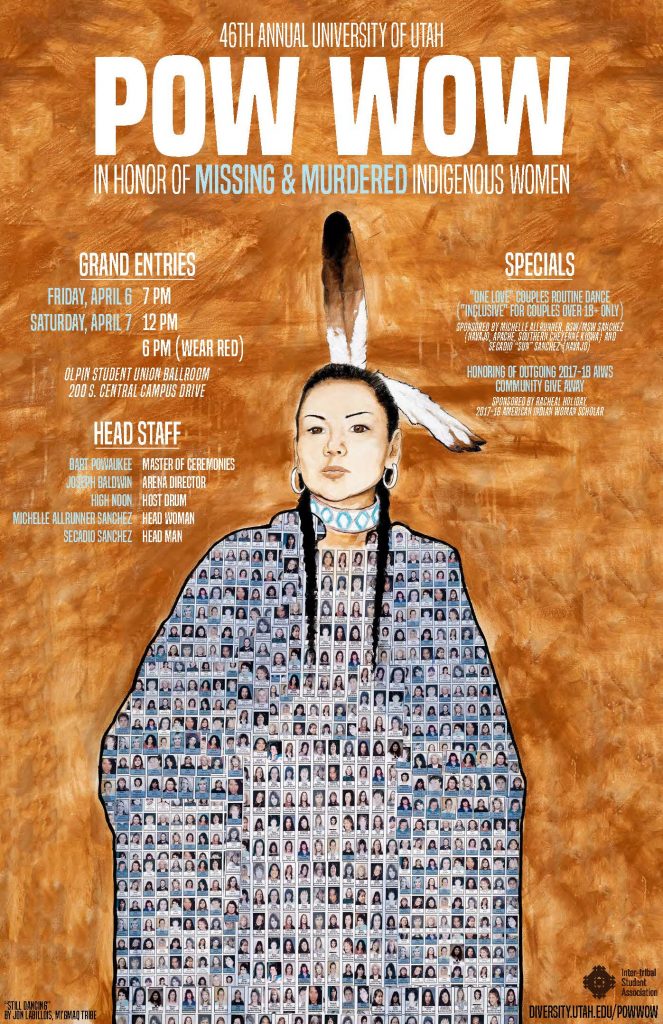 The University of Utah’s Inter-Tribal Student Association (ITSA) presents the 46th annual Powwow on April 6 at 7 p.m. and April 7 at 12 p.m. in the Olpin Student Union, Ballroom. ITSA invites Native American tribes from across the West to come together in traditional singing, dancing and drumming. The event kicks off with a Grand Entry on April 6 at 7 p.m., followed by two more on Saturday, April 7 at 12 p.m. and at 6 p.m. The ceremonial Grand Entries are a cultural and spiritual tradition in which participants parade, dancing to the beat of the host drummers.

This year’s theme, “In Honor of Missing and Murdered Indigenous Women,” centers on an epidemic of violence against native women in North America. On Saturday, ITSA member Lori Begaye will speak about the crisis.

@theU sat down with Sheldon W. Begay, co-president of ITSA , to talk about the powwow, the theme, and the role ITSA has on the U campus.

What is the University of Utah Powwow?

It’s all about bringing people together. We have drum groups, they sing, and there’s the color guard honoring the native veterans. All types of dancers come in their regalia. There’s real meaning behind it. They’re not just out there dancing. They want to express themselves through the power of dancing, which is really awesome. A lot of it comes down to honoring those that came before them, or whatever is on their mind. This year’s theme is “Missing and Murdered Indigenous Women,” so I wouldn’t doubt that a lot of the people coming to dance have been affected, or they have a relative, or they’re looking to try to honor them in this way.

How did you all decide on this year’s theme, “In Honor of Missing and Murdered Indigenous Women?”

The native community has been very active in the issue of missing and murdered indigenous women. It’s a huge issue. I knew it existed, but I never realized the magnitude of it. You don’t think it could happen to you, or to anyone you know, and then, it just happens. With all the data, or the lack of sufficient data, we find out that everybody’s reporting the same thing — we have all these missing, murdered women, but nobody knows who did it. This year, it’s been getting a lot of attention on social media, and women are speaking up about it. So, we decided to honor it.

On Saturday, one of our members, Lori Begaye, is going to talk about the issue, what the situation is, and the resources that exist to help indigenous women. We have six nonprofit vendors coming that are centered around domestic violence: The Utah Coalition Against Sexual Assault, the Rape and Recovery Center, University of Utah Women’s Resource Center, and a couple more.

ITSA is hosting the powwow. Can you tell us more about the organization?

We are a community that brings Native American students together to promote unity and understanding among ourselves and the community, and strengthen our cultural roots. In November, we had our annual American Indian High School Conference that was centered on how to sustain your culture while pursuing higher education. We try to set an example for incoming native students. We have urban natives, but most of our members come from the reservation, and it’s a huge culture shock. We’re trying to let them know that there is a place on campus, the American Indian Resource Center, so, they’re not alone. There’s plenty of people in your same spot that can mentor you, that can help you move along.

We want to build a community where people are comfortable talking to each other. If somebody is having doubts about completing school, we’re here to talk about it. We do outreach on campus to let native students know we exist. When I came here, I immediately got involved with it. Here you get to meet people from the same area as you. You find out we’re just a fun, tight group.

The powwow is free and open to the public, but organizers ask that attendees be respectful and follow powwow etiquette. What would you tell someone who is coming for their first time?

If anyone doesn’t have experience with powwows, just come out. It’s going to be something that you won’t forget. If you don’t know a term, or if you have a question, find one of us and we can answer it for you. It’s perfectly OK to ask me, “What do you guys call your costumes?” I use this as a teaching opportunity to educate that we call them our regalia, not costumes. It will be a cool experience.