Mason Wells, Nicholas Coleman and Clara Millett were among a small group of University of Utah students to observe firsthand one of this nation’s most notable political events: the official hand-off of power from one U.S. president to the next.

The three are serving internships with the U’s Hinckley Institute in Washington, D.C., this semester, an opportunity each seized knowing it would give them a front-row seat to historic change. 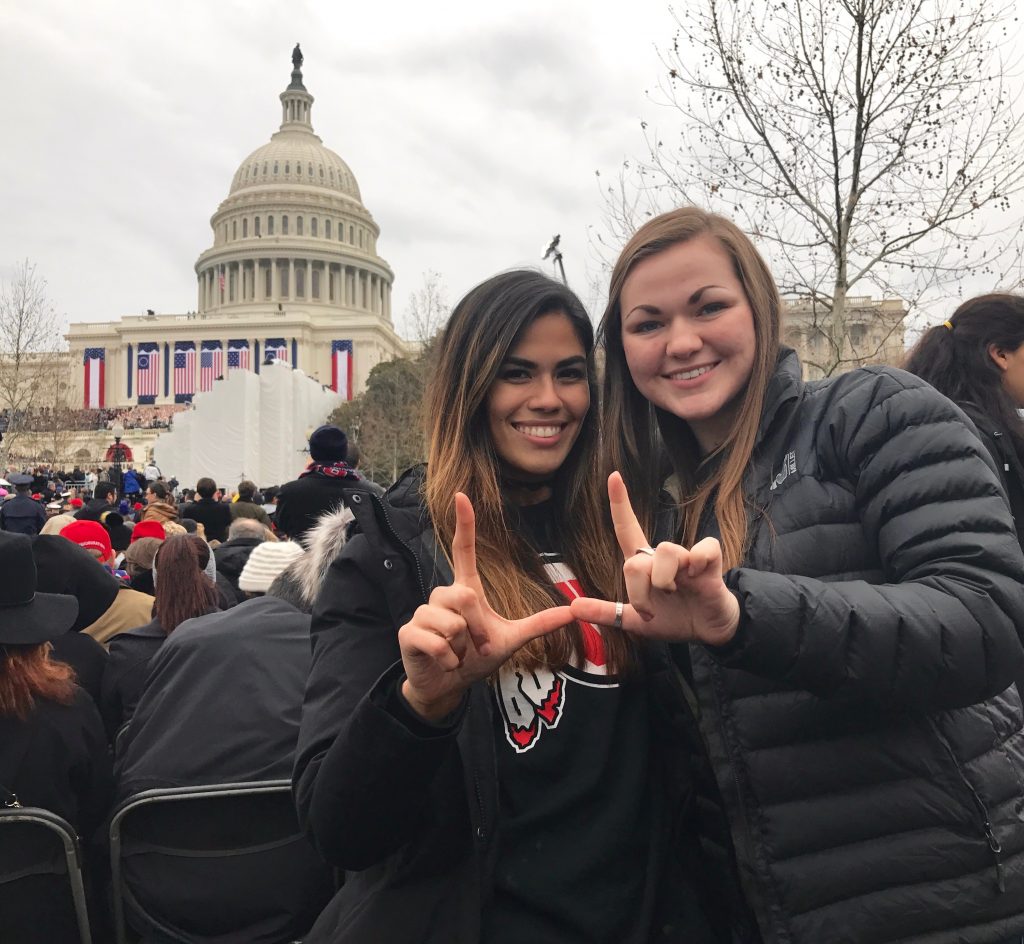 “This is something people wish they could be doing and the fact that I got to be there — I’m extremely grateful and proud to be living in the country that I do,” said Millett, a sophomore majoring in health, society and policy. Millett is working with the strategic planning team in the Office of the Assistant Secretary for Planning and Evaluation in the U.S. Department of Health & Human Services (HHS).

Millett plans to pursue a master’s degree in public health and would like to work for HHS or the Centers for Disease Control. The internship, she said, couldn’t be a better fit with her future goals.

On Friday, she joined U senior Elizabeth Espinoza in making the early morning trek to the inauguration ceremony for President Donald J. Trump. The number of military and police officers cordoning their route was impressive, Millett said. The throngs surrounding them were solemn at first and — surprisingly to Millet — disrespectful when Trump’s opponents took their seats on the dais. But the crowd soon reverberated with an enthusiastic, supportive vibe that engulfed Millett.

“It was neat to be around the people feeling the other way, putting their whole faith and life into this,” she said. “The swearing-in had an almost spiritual feel, a lot of American pride. … I am hoping for the best for this administration.”

And she’ll get a chance to help it succeed starting Monday morning.

Wells, a freshman majoring in mechanical engineering, woke at 4 a.m. Friday to get to the inauguration ceremony. He is serving as an intern in the office of U.S. Rep. Jason Chaffetz of Utah, and said politics is “my secret passion.”

“There is no better way to understand public service and how our nation is built,” Wells said of his internship.

The ceremony, Wells said, “restored my confidence in the direction our country is going and made me feel optimistic for what the future holds.”

Wells and Coleman had seats about 100 meters from the balcony where President Trump took the oath of office, administered by U.S. Supreme Court Chief Justice John G. Roberts Jr.

Wells said the ceremony, once it got underway, was shorter than he expected and surprisingly simple and practical.

There were disruptive protests throughout the city Friday and the inauguration crowd included supporters of Hillary R. Clinton, he said. But the overriding spirit at the ceremony, Wells said, was the same one he has experienced so far on Capitol Hill — an embracing of the American dream.

For Coleman, spending this semester in the nation’s capital may offer a glimpse of his future: He hopes to be a United States senator one day.

Coleman, a freshman, is majoring in political science and economics and is serving his internship with the Senate Finance Committee. The Hinckley Institute’s strong internship program was a major factor in his decision to attend the U. One week in, the experience has not disappointed. He’s spotted Ohio Gov. John R. Kasich, Utah Gov. Gary R. Herbert and swath of other state governors. The man ahead of him in the sandwich line at a Senate Building cafeteria? Rick Perry, former governor of Texas and nominee for Secretary of Energy.

Despite the early morning, the long wait in the cold, the inauguration ceremony was “really exciting,” Coleman said.

“There were more Trump hats than I’ve ever seen in my life,” he said.

Coleman described the atmosphere as a mixture of hope for the new administration and bitterness for the old one.

During the ceremony, protesting was kept to a minimum, he said — too subdued and far away to be distracting until afterward. Trump supporters, though, drowned out remarks from Senate Minority Leader Chuck Schumer at one point, Coleman said. He could hear chants of “USA” reverberating off buildings.

“Being in that crowd, it made me feel like there is very high hope for President Trump’s administration, in the best way,” Coleman said. “A lot of people were laughing, crying, just adoring him.