Humans of the U: Samery Moras

"In the six years that I competed internationally as part of the U.S. team, I met some of the greatest people, learned about new cultures and grew mentally alongside my athletic career."
Andrew Thompson Landerghini - University of Utah Communications

“I didn’t have much of a choice in whether I trained in martial arts or not. My family opened a studio before I was born. I grew up in the dojang learning how to walk while wearing taekwondo headgear. Everyone in my family was a black belt, and every day after school I would go straight to the studio to take a taekwondo class. My initial impression was pretty negative. My family was heavily involved in competitions since my oldest sister was a member of the Peruvian National Team for taekwondo and karate. As I grew up, I found that I hated tournaments because I would have to watch my friends win medals while I lost every match. It wasn’t until I was 19 years old that I realized the reason I performed so poorly was that I was afraid and was letting fear control my actions and emotions. I decided to face them head-on and really found out how much I loved martial arts and the crazy adventure it would take me on. 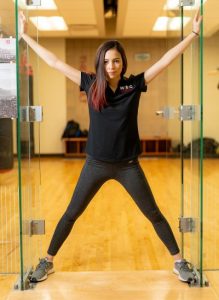 In the six years that I competed internationally as part of the U.S. team, I met some of the greatest people, learned about new cultures and grew mentally alongside my athletic career. A few months ago, I retired from being a competitive athlete in taekwondo. When I was competing, I would train two to three times a day and everything revolved around taekwondo. Outside of regular physical training, I would always be studying matches, focusing on my mental training, meal prepping to fuel my body or resting. Now, my goals have changed and I like how taekwondo is still a part of my life in different ways.

What means the most is every obstacle I had to face and how it helped me become a stronger person. Training and competing in martial arts made my body stronger, but it also grew my personality. Whether it was being away from my family in a strange country for weeks without knowing the language or people, enduring hard training sessions where I was convinced I couldn’t last one more round, feeling completely crushed after a major injury and learning how to recover, or having to keep my self-control after failures where all I wanted to do was quit—the person I became means more to me than all the medals and accomplishments.

I started at the University of Utah as a freshman and loved the classes and friends I made. However, this was around the time I started training, which was in Utah County, so I had to switch to Utah Valley University to minimize driving time and have more time for training.

After I graduated, I heard about the Master of Business Creation (MBC) being offered by the U and thought it would be a perfect fit for my goals. The MBC is a nine-month program perfect for entrepreneurs where you earn your master’s degree along with launching your company. My career goals are to successfully run my martial arts online training company, and now to launch a women’s self-defense program to help teach women about safety in a fun and relatable way.

Outside of class, I run a YouTube channel and an Instagram account—I have built an audience of over 250,000 followers across all my channels and platforms. I love content creation and finding new ways to spread positivity and inspire others through my content. Aside from this, I also run two martial arts schools with my family—AMYS Martial Arts.

I try to be a positive role model with anything I do. My favorite part of having an audience is when I get thank you messages, or people coming up to me at events to tell me how I’ve impacted their life in some way. That’s the most motivating reward and drives me to continue.”