Have you ever looked at the glittering night sky and wondered, does life exist on other planets?

This question drives Julia McGonigle and Sheri Motamedi, doctoral candidates in the School of Biological Sciences in the William Brazelton Lab at the University of Utah, whose research falls into a field called astrobiology. But rather than probe planets and moons light-years away, they look for answers in one of the most extreme environments on Earth. 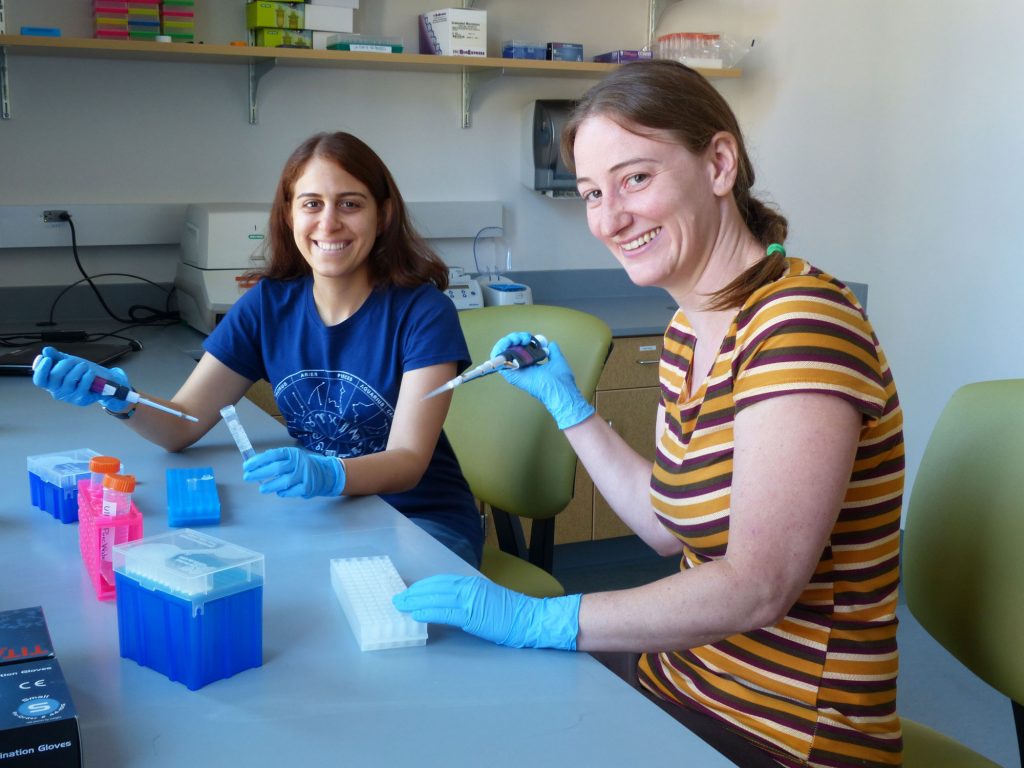 Sheri Motamedi (left) and Julia McGonigle (right) pipette in their lab. Part of their research involves extracting DNA to identify the microbes that exist in the Lost City.

McGonigle and Motamedi study extremophiles, the microbes that thrive in places where most living things would perish. By researching ecosystems that resemble the parts of space most likely to harbor life, such as Jupiter’s moon Europa and Saturn’s moon Enceladus, astrobiologists can better understand where the universe could support life.

“If we want to find life in our solar system or beyond, there aren’t a lot of planets as cushy as Earth. We have to look in the extreme realms of this planet and figure out what the limits are to life,” said McGonigle. “It’s interesting learning where those limits are here in order to understand the spots in the universe that are too extreme versus the spots where might we get lucky.”

Astrobiologists from around the country will gather at the U this week to share their latest research at AbGradCon 2019. The public is welcome to join them on Tuesday, July 23, at 7:30 p.m. at the Crocker Science Center to watch live demonstrations that illustrate how astrobiologists do what they do. At 9 p.m., all will explore the heavens using telescopes on the roof of the South Physics Observatory.

Lessons from the ocean floor

McGonigle’s and Motamedi’s research focuses on a spot deep in the North Atlantic Ocean called the Lost City, a geologic wonder that scientists discovered in 2000. Three scientific expeditions have since revealed that the Lost City is truly a place like no other. McGonigle and Motamedi joined the most recent trip last year, spending 25 days in the middle of the ocean collecting samples of fluids flowing out of the chimneys.

“It was such an adventure. It’s weird because you’re trapped in a tiny environment with the same people and you may or may not like them,” said Motamedi, laughing. “But at the same time, the science itself was amazing. You’re sitting in what looks like a NASA control room, supervising an ROV [remotely operated vehicle] taking the samples.”

The Lost City sits on top of an undersea mountain, Atlantis Massif, located just off of the Mid-Atlantic ridge. Its base is mostly made of serpentinite that supports columns of calcium carbonate (CaCO3) that project out of the mountain like chimneys. This is no oasis, however—the formation overlays deep cracks in the Atlantis Massif from which heat and fluid escape from the bowels of the Earth.

A process called serpentinization drives the Lost City’s unique geology. Serpentinization occurs when water interacts with the mantle rocks to create serpentinite. The process produces methane and hydrogen gases and small organic compounds, and creates a high-temperature and deadly alkaline environment. Seawater seeps into the subsurface rock, then flows up and out of the chimneys and carries the products of serpentinization into the surrounding water. Thick biofilm mats grow at the chimney openings, thriving in an environment that would kill all or most other life forms. These are colonies of bacteria and archaea, the extremophiles that could be similar to life existing on other planets.

“The Lost City’s ecosystem is based around rock and water. Heat and nutrients are created that fuel the microorganisms,” said McGonigle, whose research focuses on the CaCO3 chimneys. “Similar environments are a good place to look for life on other planets because you only need rock and water to get life started.”

Life in the Lost City

McGonigle’s research focuses on one question—what are the biofilms doing there? All forms of life need carbon. In most ecosystems, the carbon comes from carbon dioxide (CO2). The chimney environment has no CO2 available; the dissolved CO2 in the fluids precipitated out to form the CaCO3 chimneys themselves.

The serpentinization process taking place beneath the subsurface produces many compounds, including methane and formate that some life forms can use as carbon sources. “We think that similar geochemical processes might be happening under the surface of other planetary bodies, like on Europa, Jupiter’s moon,” said McGonigle.

Motamedi’s research focuses on the serpentinite rocks beneath the chimneys. During the serpentinization process, a ton of methane and hydrogen release, making a nutritious source of food and energy that could support microbes in the absence of light and oxygen. Motamedi is the first person to search here for life using drilled rock cores from an International Ocean Discovery Program (IODP 357) expedition in October 2015. She spent a year developing a method for extracting microbial DNA from these low-biomass precious rock cores to see if any microbes were living in the rock.

“The interesting result was we found microbes. And this is exciting because if the serpentinization is happening in the subsurface of Europa and Enceladus, we might find life there as well,” said Motamedi.

If you’d like to learn more about the Lost City, visit lostcity.biology.utah.edu.