His Holiness the 14th Dalai Lama’s long-awaited visit to Utah was received by a full house at the Jon M. Huntsman Center on Tuesday, June 21. After canceling his scheduled visit to Utah in October 2015 because of health reasons, many feared the visit would never happen but he arrived with a moving message that motivated and inspired the thousands who came to look inside themselves to spark change.

As the Dalai Lama slowly mounted the stairs to the stage, the crowd stood and watched in reverence. He greeted everyone with a smile and wave. After accepting the University of Utah Presidential Medal from President David W. Pershing, he sat down adorned in U logo hat ready to address the masses. A brief Q&A preceded the main address, which covered two key topics: compassion and universal responsibility. 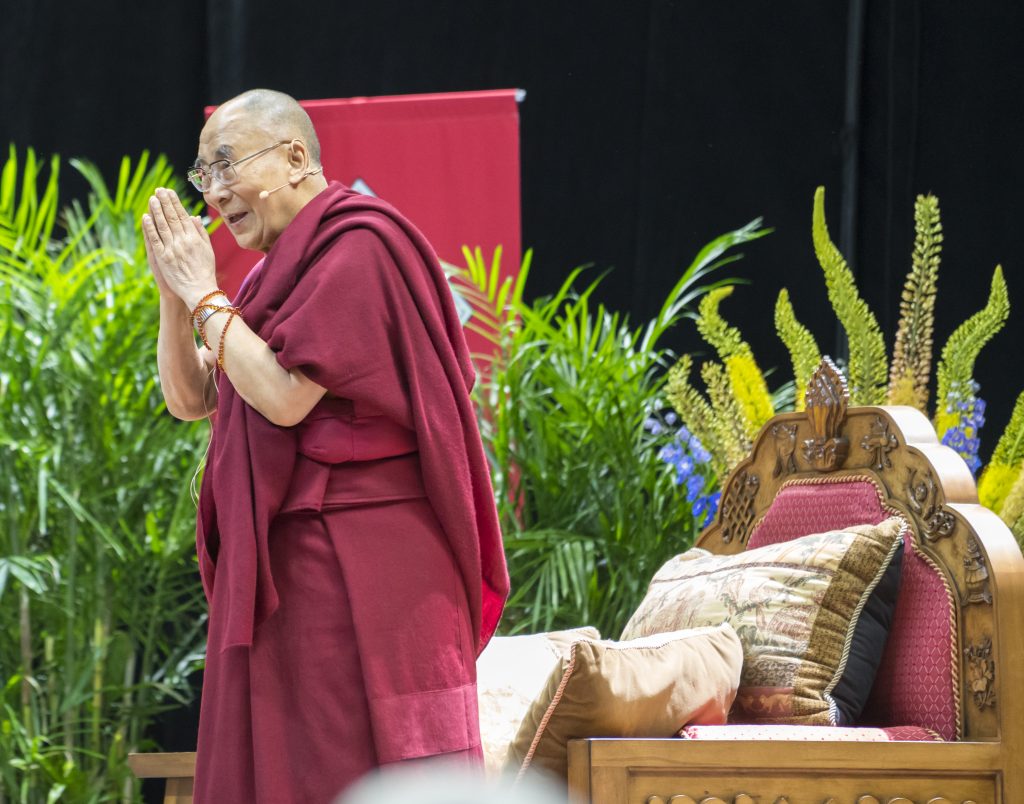 He started with a message of seeking ways to find common ground across all humanity. “We are all equal and have the same desires,” he said. “Everyone on this planet of 7 billion people desires and has the right to desire peace and happiness.”

Leaning forward in his chair, he asked, “Who destroys peace and creates violence?” His answer was simple- not God, but us. He implored listeners to take responsibility, solve problems without violence and restore peace where it has been lost. He emphasized our ability to act and reminded us that peace does not just happen; rather, it is a result of peoples’ actions. “If we do not make an effort, the century will continue with suffering and bloodshed.”

He said one way to promote peace is to adopt a new way of thinking. “We live in a global economy. To be globally minded is to have a sense of unity and oneness. Serve other human beings and promote a sense of concern for others.”

The Dalai Lama recalled an experience where he was on the receiving end of this philosophy. In 1959 he was forced to flee Tibet and found refuge in India. The Indian prime minister, Jawaharlal Nehru, offered immense help and sympathy for him and his some 7 million followers. Together, Nehru and the Dalai Lama focused their efforts on helping Tibetans become self-sustaining, find homes and develop educational opportunities for misplaced children. He said his experience receiving such tremendous compassion helped preserve the wonderful traditions of Buddhism and Tibetan culture.

Real hope led him to find inner strength to deal with some of his hardest trials like losing his freedom at 16 and his country at 24. During the course of 81 years he has seen and faced countless difficulties, essentially from man’s own creation, he said. However, no matter the challenge, he holds fast to hope. “People who give up hope are never the recipient of success.”

Even in times of darkness, the Dalai Lama manages to find light. While exiled in India, he recognized the strengths in the heritage of the Tibetan people. He addressed the Tibetan people in their native tongue about their 2,000-year history and the opportunities they have to show resilience. “This critical period has given us an opportunity to demonstrate the strength and resilience of our people. We must remember this.”

As the address came to an end, the Dalai Lama slowly surveyed the crowd of over 9,000 and offered his last piece of counsel: “The change of humanity over centuries starts first with one individual. The spirit of compassion can spread to different parts of the world by the work of just one person.”