In the 400s, St. Patrick, known then as plain Patrick, spent his life trying to convert the Irish to Christianity. According to folklore, Patrick used a three-leaf clover, or a shamrock, to illustrate the concept of the Holy Trinity. Centuries later, traditional St. Patrick Day partiers gather bunches of shamrocks to pin to their coats and hats. In the United States, the festive frond adorns T-shirts, shot glasses and over-sized sunglasses. Most botanists consider the suckling clover, or Trifolium dubium, to be the authentic shamrock species.

If St. Patrick had stopped by Utah, he would have found numerous native clovers with which to preach. All are members of the three-leaf genus, Trifolium (tri = three + folium = leaf.) Some species are found throughout the west, others are just found in Utah. One particular clover only exists on a few mountain slopes, and human activity and dwindling habitat has made it one of the rarest plants in the state. 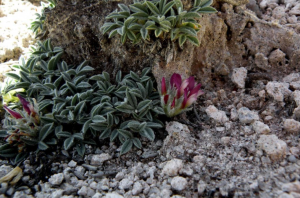 Photo credit and for featured image: Daniela Roth. The Frisco clover is one of Utah’s rarest plants, and a candidate species found eligible for the Endangered Species Act. Mining is the biggest threat to the clover’s limited habitat.

The Frisco clover, or Trifolium friscanum, is a three-leaf clover that is a candidate species found eligible for listing under the Endangered Species Act. The perennial plant only grows in Beaver and Millard Counties in Utah, with small populations in the San Francisco, Wah Wah, and Beaver Lake Mountains, and the Tunnel Springs Range. Its silver, hairy leaves form densely-matted mounds that burst with rich, scarlet purple flowers from late May to June. A keen eye can spot the clovers sprawled across boulders between sparse stands of junipers and pinyon pines.

Mining is the biggest threat to the Frisco clover, which needs to grow in shallow volcanic gravels, and soils composed of limestone and dolomite. Future mining activities that destroy this limited habitat will likely kill off large numbers of the plants, according to the United States Fish and Wildlife Service. When the mining stops, nonnative invasive plants thrive in the disturbed environment, preventing new Frisco clover sprouts.

“It turns out that the level of diversity in the Trifolium genus is quite high, leading to specialization of plants growing in all sorts of environments,” he says. “From damp meadows at low elevations to alpine meadows at high elevations, and from low-lying wet sand seeps to extremely dry mountain environments.”

Native clovers rarely grow naturally in urban environments because nonnative clovers outcompete them. Those fragrant white clovers that decorate every sidewalk crack and make killer flower chains are Trifolium repens, or Dutch white clover, an invasive plant from Europe. The white clovers thrive in human-altered landscapes because they can improve the quality of soil. Bacteria living on their roots convert nitrogen from the air into a usable type of nitrogen that plants need to grow. This allows the white clovers to colonize the nitrogen-poor dirt leftover from major disturbances, such as construction sites. 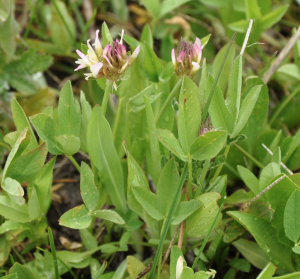 Summer clover, or Trifolium longpipes. Said to be the most common clover in the Utah mountains. 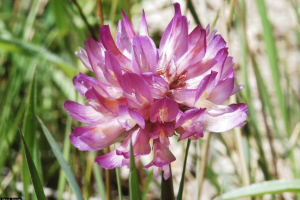 PHOTO CREDIT: Used with permission by Gary A Monroe.

Beckwith’s clover, Trifolium beckwithii, is a native clover found throughout the western states. 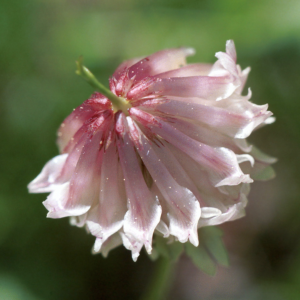 King’s clover, Trifolium kingii, is a native clover throughout the western states. 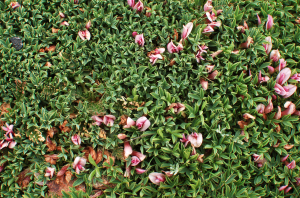 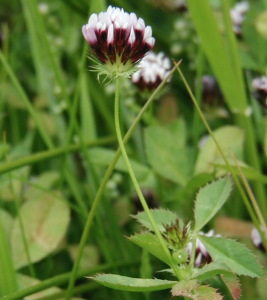