Not sure where to eat while simultaneously enjoying the summer weather? Look no further than the Marriott Library Plaza.
Chanapa Tantibanchachai - associate science writer, University of Utah Communications

This past warm Tuesday, I moseyed down to the Marriott Library Plaza to see what food trucks were around and was sorely disappointed to see only two trucks: The Bento Truck and Café Trang. Since I already reviewed the former, I was left with no choice but to order from Café Trang. The menu offered a surprisingly wide variety of options ranging from $3.50 to $5.50 per entrée. Some of the options included caramelized pork over rice for $5.50, curry dishes over rice for $5.50 and egg rolls for $3.50. Though spring rolls were on the menu for $3.50, they are actually not offered during the summer due to spring roll wraps hardening in the heat.

With two men running the truck and lower demand during the summer, the service was very fast. More importantly, the service was also extremely pleasant; both men were attentive, courteous and fun to chat with. The man whom I asked about the truck’s regular hours said he enjoys being on campus every day and has even come to make a number of “true friends.” He even complimented his nearby competitor, The Bento Truck.

Seeing as Café Trang is well-known for its Vietnamese food (they have three restaurant locations in Salt Lake City, Draper and Murray, and have won awards such as Best Asian Food and Best Vietnamese Food), I played it safe and ordered a Vietnamese classic: a banh mi sandwich. The sandwich cost $3.50 and I also got a Thai iced tea for $2. For some reason, I expected the banh mi to be freshly made, but my sandwich was one of many premade sandwiches sitting in a stack behind the counter. If you’re looking for a freshly made sandwich, this isn’t the place to get it.

Upon receiving the sandwich, I felt the wrapping was moist and immediately assumed that the sandwich was greasy, which turned me off a bit. Not sure what to expect, I hesitantly unwrapped the sandwich when I got back to the office and was pleased to find a generous section (roughly six inches) of French bread stuffed full with grilled pork, cilantro, carrot, lettuce, cucumber and daikon (white radish). What I took to be greasiness actually turned out to be a tangy, sweet sauce. I detected traces of fish sauce, pepper, sugar and maybe a bit of lime. 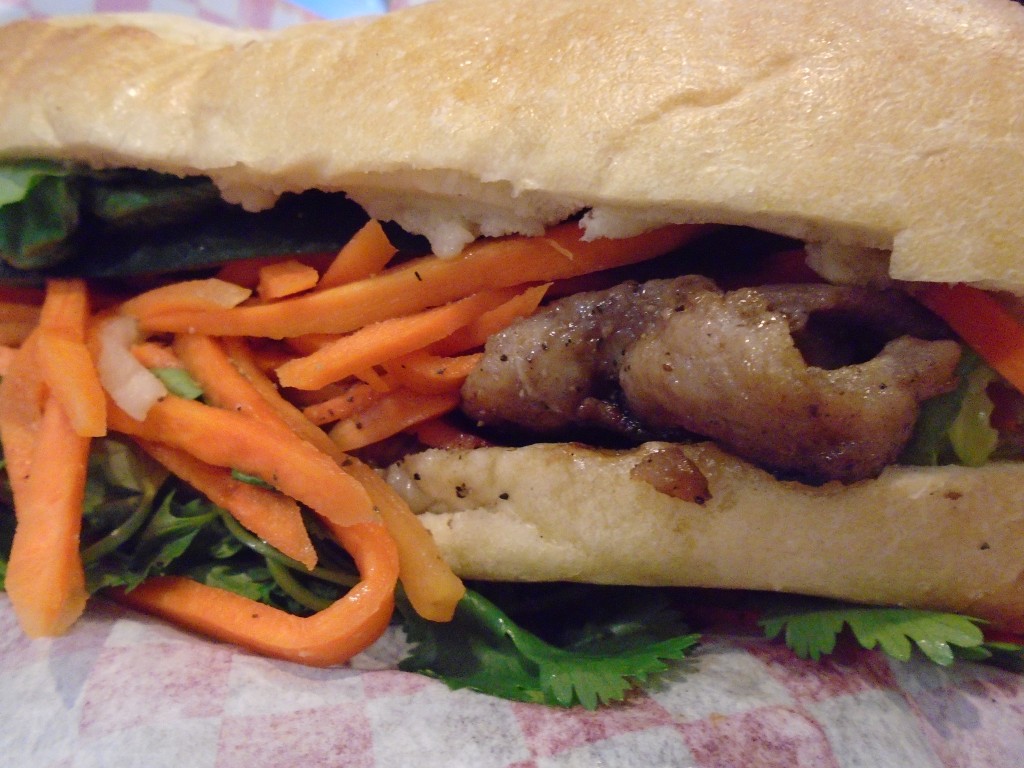 The sauce and vegetables served as a fresh contrast to the bread and meat, which would have been too heavy on their own. The sandwich’s vegetables-to-meat ratio, however, was skewed heavily towards having significantly more vegetables. It made me feel like I was eating a small salad with some meat and a giant breadstick rather than a sandwich.

My only other gripe with the sandwich is that I would have normally only eaten half of it, saving the other half for a second meal and bringing the cost of each meal down to $1.75. Having recently finished graduate school myself, I’m still on a strict budget and split meals as often as possible to cut costs. I imagine a lot of U students employ the same money-saving tactic. However, the sauce had already soaked into the bread and the bottom half of the sandwich was starting to get soggy (I had to break out a fork and knife) and I had no choice but to eat the entire thing because I didn’t want a soggy half sandwich for dinner.

All in all, I’d give Café Trang 3 out of 5 stars. For being a food truck situated on a college campus full of budget-conscious students, the prices are reasonable. Would I eat there again? Maybe, just because it’s there and convenient, but not because they left me begging for more.