Jory Lerback has two passions: science and social justice. She is a Global Change and Sustainability Fellow pursuing a master’s degree in hydrology. Lerback tracks how ground water flows beneath the Earth’s surface, an essential part of understanding regional water rights. She joined the U last semester after working as a data analyst at the American Geophysical Union (AGU) an organization with nearly 60,000 members that publishes 20 peer-reviewed journals in space and Earth sciences. Lerback also combined her two passions at AGU; she tracked the behavior of scientists and editors in scholarly journals, an essential part of understanding gender bias in academia. 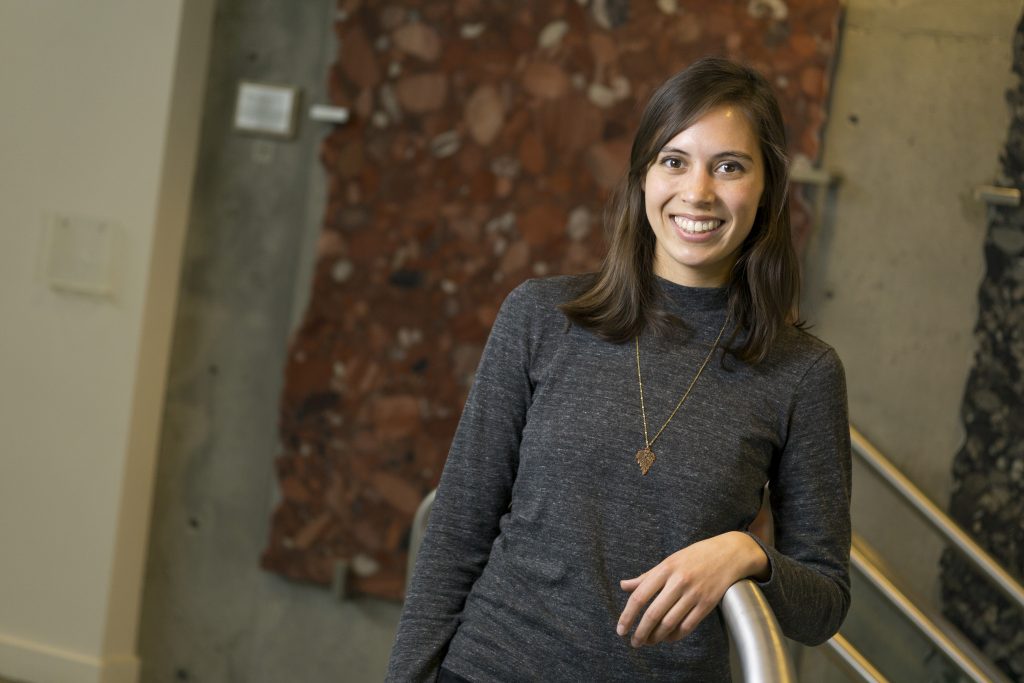 Jory Lerback, Global Change and Sustainability Fellow pursuing a master’s degree in hydrology, started Inclusive Earth, a group that aims to build a respectful dialogue about safety, bias, and diversity in the College of Mines and Earth Sciences.

Lerback analyzed the peer reviewers across all of the AGU-published journals. Peer review is a process by which experts in the field evaluate the work of their peers to ensure that the significance of papers is suitable for scholarly publication. Peer review is an important step for scientists to network, improve writing skills and build a scientific career.

Her analysis revealed that publishers need to work harder to get more women to peer review their scholarly journals. The findings, published in Nature on Jan. 25, inspired Lerback to start a group at the U that addresses bias in the sciences. The group, called Inclusive Earth, hosts speakers and workshops to raise awareness of social issues and provide attendees with the tools to have a respectful dialogue about safety, bias and diversity in the College of Mines and Earth Science. Lerback sat down with @theU to talk about the paper’s findings and the ways in which she hopes to battle bias at the U.

Q: Congratulations on your Nature publication.

A: Thank you! I’m so excited…and so relieved it’s finally finished (laughs).

Q: Your analysis is one of the first to reveal a gender bias in scholarly peer reviewing. Did the findings surprise you?

A: Some people suspected it was happening, but I liked that we had such a big data set that was statistically significant. It takes anyone’s hunches on the subject and puts it into light as a real and tangible phenomenon. You can’t always ask these questions about gender because scholarly journals don’t collect demographic information for good reason; review processes that remove identifying characteristics of the authors are supposed to blind out any sort of bias.

AGU has the unique opportunity to look at gender demographics in the journal system because it’s both a membership society and a publisher. The membership side has been collecting demographic information since 2013.

Q: Why is the peer-review process important?

A: Well, it’s important for a person’s career, but it’s also really important for science in general.For someone’s career, it gives a look at new science as well as helping with your writing and critical thinking skills. You get to see the “frontier” in your field — it makes your own science better to know other people’s scientific perspectives. It also gives you a lot of networking connections with your editors, and with collaborators.

For science generally, it’s good to have people with different viewpoints and backgrounds looking at similar scientific problems. If you’re not trained the same way, or you have different life experiences than the experiences of the authors you’re reviewing, you look at problems in a new light. That’s really important for making science better. And that’s one of the main points of the whole peer review process.

Q: The paper’s main finding is that there were fewer female peer reviewers for papers published in AGU journals than expected — between 2013 and 2015, only 20 percent of all reviewers were women, which is significantly lower than the 28 percent of AGU members who are women and the 27 percent of women who were accepted first authors. Why is that unexpected?

Q: How are peer-reviewers chosen at the AGU journals?

A: When a researcher is about to submit a paper, they have to list three to five reviewers that they think are experts in the field and can review the paper. On average, the editors of the journal will only ask 30 percent of those reviewers, and then make their own list. They’ll invite two at a time, and whoever declines, they’ll invite the next person on the list. 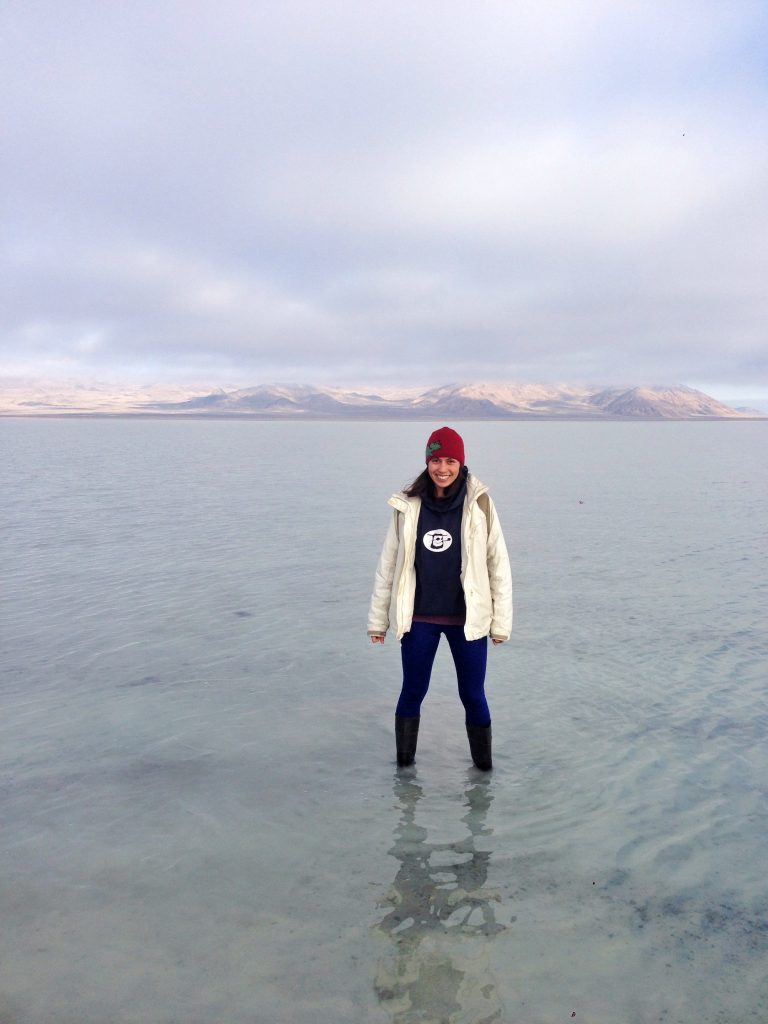 A: The first question we asked was, is it because women are declining more offers to review? There is research that says women in academia and other work places have more work burdens placed on non-academic or non-writing activities. As an underrepresented person in science, you’re expected to do more committee work and outreach. There’s a lot of research saying that women have more work burden of family, especially as early career scientists. So in order to publish as much as men, who are more widely used as a metric of success, they’re not able to spend as much time reviewing.

Overall, there wasn’t any difference in decline rates from women and men across all age groups. But when we took age into account, we found that women declined slightly more than men in their same age group.

Then we asked, is it who we’re asking to be reviewers in the first place? We looked at who the authors were suggesting and it turns out to be a big difference; female authors suggest about 21 percent female reviewers and male authors only suggest 15 percent.

Authors don’t think, “Oh, I’m about to submit my paper. I need to make sure that I’m demographically representing my field in an equitable light.” But it’s important. They’re giving the editors a list of people that will guide them towards thinking in a certain way. The percent of females that editors are inviting isn’t actually that different than who the authors suggest. And the invitations, not the declines, is where most of the gap is coming from.

Q: What advice do you have for academics that want to address gender bias?

A: Awareness is a huge part in actually doing anything about this. And it’s important to realize that both men and women do this. When you’re submitting a paper, reflect on why you are choosing that reviewer. How do you find those people who you consider experts in your field? Also think about how you talk about your colleagues and students — are you representing the talent pool equitably?

Q: Last semester, you reentered academia and started a master’s program here at the U. Have the paper’s findings changed your view of academia?

A: Entering back into grad school, it’s heavily on my mind. Here, we’re starting a group in the College of Mines and Earth Sciences, called Inclusive Earth. This group is about professional development, and it’s supposed to give people tools to deal with issues that can come up and be aware of small biases that can magnify with time and greatly affect people’s careers.

Addressing these issues of inclusivity is an opportunity for growth- an opportunity for us to produce the best community of faculty, staff and students that we possibly can. It makes our science better; it makes more collaborations with more diverse viewpoints. It’s not really just demographic diversity, it’s diversity of discipline, too. We’re trying to get a lot of different programs in place that can help people do better going forward in their careers.

Q: Who do you hope will benefit from Inclusive Earth?

A: Our first meeting was actually mostly faculty and staff — perhaps because this is something that they are more aware of. But we want to get more students involved because students are the people who are going to take these skills out into the world and be able to exponentially broaden the effect of what we can teach here with this group.