Memorial Day is a time to reflect on those in the military who’ve made the ultimate sacrifice for their country. For University of Utah students who are also veterans and on active military duty, the weekend holds special meaning.

Q: What brought you to the University of Utah?

A:   I am from Washington, D.C., born and raised. I attended St. Anselm’s Abbey School for high school and then the U.S. Air Force Academy, where I earned a bachelor’s degree. I founded a charity while at the academy called Cadets in Action Overseas (CIAO). We organized disaster response in Haiti and Japan in 2012 where Air Force cadets rendered humanitarian assistance. I applied to a number of schools for graduate school. I was accepted into the Harvard Kennedy School for an MPP, but Utah attracted me because of the growing business landscape in the Salt Lake Valley, my family in the area, and a full scholarship from the president’s office. My grandfather also attended University of Utah and was in the Air Force ROTC program.

Q:  What made you interested in the degree program you chose at the U? How do you plan to use your degree in the future?

A:   I chose International Affairs and Global Enterprise because the military does not allow active duty officers to pursue MBAs and I knew that I wanted a business degree that had an international focus. I have a background in political science and economics from my time at the Air Force Academy and felt that the CSBS-based MIAGE program was the best fit for me. MIAGE allowed me to pursue my interest in disaster policy, and I have had the opportunity to study the economic impact and political effects of natural disasters while at Utah.

Q: You are an inspiration to many other veterans out there pursuing a higher education. What’s next 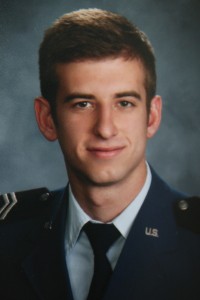 A:  After MIAGE, I will attend pilot training at Columbus AFB, MS where I will fly for the U.S. Air Force for the next nine or 10 years, hopefully in a humanitarian assistance-type role. After that I would like to keep my options available between politics and business. One career path I have thought a lot about would be to use my MIAGE degree to earn a job at the World Bank where I could coordinate major disaster recovery projects in developing nations.

Anyone should prioritize education and take out whatever loans they have to get it. I was fortunate to be sponsored by the U.S. military during my college and graduate school years. I encourage anyone to consider the military as a way to pay for school while aspiring to a great profession in the service of others.

Melinda Rogers is a communications specialist at University Marketing and Communications. Got a story idea for her? Email: melinda.rogers@utah.edu.