A team of researchers at University of Utah Health has shown the Epstein-Barr virus—which causes mononucleosis and is linked to the development of several cancers—uses a novel strategy to survive. The virus takes the reins of its host’s cellular machinery to make copies of itself and to prioritize the production of its own proteins over those of the host cell. The researchers hope to exploit this knowledge to develop a new kind of treatment for infection by the Epstein-Barr virus.

Epstein–Barr virus (EBV) is a human herpesvirus found in 95% of the human population. Like other herpesviruses, EBV can be spread from person to person. However, the virus generally remains latent—that is, it lingers inside of cells without actively replicating—for the lifetime of the host and rarely causes disease beyond the initial infection. In some cases, though, environmental triggers, including stress or coincident infections and immune suppression, create conditions in which the virus can thrive, occasionally sparking a rare type of lymphoma or other cancer.

Four years ago, the U of U Health research team found that spironolactone, a medicine routinely used to treat heart failure, has an unexpected antiviral activity against EBV. They discovered the drug targets an EBV protein, called SM, that the Swaminathan lab and others previously showed is essential for EBV replication. 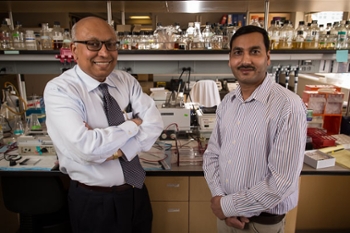 PHOTO CREDIT: U of U Health

“We were puzzled as to how spironolactone, a drug thought to work on a completely unrelated pathway involving sodium flux in the kidney, would have an effect on the virus or on SM function,” says senior author Sankar Swaminathan, division chief of infectious disease at U of U Health and professor of internal medicine.

Now, they’ve figured out more about how it works and have published their findings in Proceedings of the National Academy of Sciences.

Several years ago, a group of French researchers found that spironolactone degrades a host protein called XPB, which plays an important role in cellular transcription—one of the first steps in gene expression. Following up on this lead, Swaminathan and his colleague Dinesh Verma conducted a series of experiments to explore the potential link between the two proteins that the drug interacts with, XPB and SM.

The researchers first used a molecular biology technique to specifically lower the amount of XPB in host cells. The result was that the virus failed to reactivate and acted as if it no longer had functional SM. Next, the research team showed that SM ferries the XPB protein directly to viral DNA.

Finally, the researchers used a technique that involved chemically tagging uridine, one of the four building blocks of the RNA alphabet, to study replication of the virus. Using this technique, they demonstrated that knocking down XPB resulted in lower levels of messenger RNAs for 15 specific viral proteins whose production SM facilitated, while the expression of other EBV genes was not affected.

“We showed that SM surprisingly plays a role in activating transcription and co-opts this one cellular protein to do this,” says Dinesh Verma, research assistant professor of internal medicine.

According to Swaminathan, these 15 proteins perform functions that allow the virus to replicate in healthy people. “The virus has evolved to make these proteins at just the right time to keep the infected cells from getting killed just long enough to make some copies of the virus and maybe infect a couple more cells before the immune system kicks in and takes care of it,” Swaminathan says. “As is often the case with viruses, this solution is both very specific and highly clever.”

In patients whose immune systems are compromised, these very same properties—keeping the infected cells alive and helping them evade the immune system—can lead to unchecked proliferation, a common characteristic of cancer.

The researchers are now trying to find new drugs that target XPB to prevent reactivation of EBV and other human herpesviruses in transplant patients, HIV patients and other immunocompromised patients.

“The long-term idea is that we would be able to develop drugs that would keep the virus completely latent and that this would help decrease the risk of the development of cancers related to EBV,” Swaminathan says.

The research was supported by the National Cancer Institute. 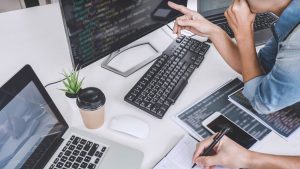 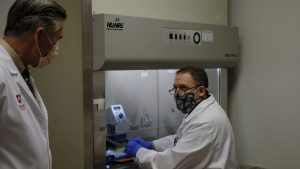