[bs_row class=”row”][bs_col class=”col-sm-9″]CORN DOG OR CANCER DOG? A recent statement by the World Health Organization is causing quite a stir among the meat loving crowd. The WHO along with the IARC have linked red and processed meats to the big “c” word, cancer (namely, colon cancer). Although processed meats have been named as known human […]
Janelle Hanson

A recent statement by the World Health Organization is causing quite a stir among the meat loving crowd. The WHO along with the IARC have linked red and processed meats to the big “c” word, cancer (namely, colon cancer). Although processed meats have been named as known human carcinogens putting them in the same category as plutonium and tobacco this does not mean that all of these substances are equally dangerous. Red meat on the other hand has only been classified as possibly carcinogeous, which simply means that there is enough evidence to suggest that it may cause cancer but not enough to classify it as a carcinogen. 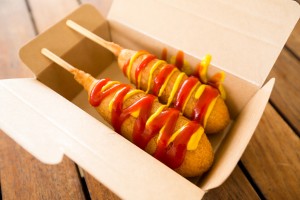 Much of what is causing uproar is the comparing of processed and red meats to smoking. Aside from the fact that they are not equally dangerous meat does have some redeeming qualities. Aside from being a source of protein red meat is also a good bioavailable source of zinc, vitamin B12 and iron. However, it is also important to remember that moderation of red meats has been a recommendation for some time considering the increased risk for heart disease and diabetes when consumed in excess (in case you didn’t know already tobacco doesn’t have any perks).

So what meats count as processed and how much is too much? Meats in the red category include beef, pork, lamb and veal to name a few. Processed meats include meat that has been transformed through salting, curing, fermentation, smoking or other processes to enhance flavor or improve preservation. It is speculated that during the cooking or processing of these meats certain carcinogenic chemicals such as N-nitrous compounds are created. So, possible cooking methods to avoid include cooking at high temperatures or over an open flame. Unfortunately this organization doesn’t give dietary recommendations so they weren’t able to state a specific amount of servings per day or week to reduce risk of developing cancer however they did say that, “An analysis of data from 10 studies estimated that every 50-gram portion of processed meat eaten daily increases the risk of colorectal cancer by about 18 percent (50 grams is less than two slices of bacon). If the association of red meat and colorectal cancer were proven to be causal, data from the same studies suggest that the risk of colorectal cancer could increase by 17 percent for every 100-gram portion of red meat eaten daily.”

Another thing to consider is that the studies may not have been able to control what other foods people ate or how much physical activity they did. In a perfect world the studies used would have had two groups that were identical in every way except for the amount of red or processed meats they consumed and then compared the rates of cancer among them. These types of studies are nearly impossible because that type of control over someone’s diet is difficult to achieve. So the question arises, could it be the meat intake or the lifestyle in general that increased the risk of cancer?
The overarching message here is to take this statement with a grain of salt and adjust your diet as you see fit. To be on the safe side you may consider not eating processed meats every day. Specific recommendations may emerge from these studies in the future but in the meantime don’t fret but don’t just call it bologna either.

More information can be found here.[/bs_col] 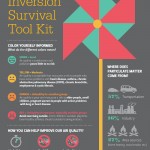 Most of us know that red is bad and green is good when it comes to air quality. But what does the color of the day tell us about how we should alter our behavior? If it’s, say, an orange day, what should we do differently to safeguard our health?