STARTING THE NEW YEAR HAPPIER IS IMPORTANT FOR YOUR HEALTH

We all strive to be happy, but sometimes events in your life can bring you down. Did last year not go as well as you were hoping? Wondering how you could be happier in the new year? Psychiatrist Anne Lin says a negative outlook will set you up for failure, so it’s important to stay positive when that calendar changes. Dr. Lin shares some helpful strategies to avoid dangerous thinking errors, and keep your outlook positive and productive this year.

Click here to listen to the full story or read the transcript below. 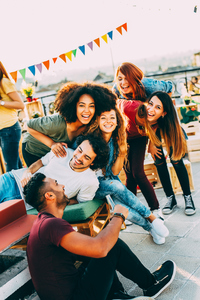 Interviewer: It’s something we all strive to be, happy. Whatever happiness means for you, it’s especially important to enter the New Year with a happy state of mind or a positive state of mind. The reason why is coming up right now on The Scope.

Announcer: Health information from experts, supported by research. From University of Utah Health, this is TheScopeRadio.com.

Interviewer: One of the most common things I’ll hear others say around this time of year is, “I wish I was happier last year,” or “I wish I was happier in general.” For whatever reason, the last year of your life didn’t go as planned, or events happened that could have maybe put you in a funky mood that you didn’t plan on. We have psychiatrist Dr. Anne Lin here in the studio with us right now. Dr. Lin, why is it so important to start the New Year with a happy, positive state of mind?

Dr. Lin: Well, I think a lot of people, when they start out with a negative state of mind, actually set themselves up for failure. For instance, they’ll make thinking errors such as, “This year’s going to be horrible,” or “Everybody hates me because so and so didn’t say hi to me.” These are thinking errors. People don’t have the power to predict the future or read other people’s minds, so I think when they set themselves up for failure like this they’re less likely to put in their best effort to make changes.

Interviewer: If you enter the New Year with that negative state of mind, is that going to carry through, throughout the rest of the year too or does it get better?

Dr. Lin: Well, I think it’s in some ways self-defeating, because they’re not able to make the changes they want to make, or they get overwhelmed or lack the motivation they need to push forward. I think there is some aspect of mindfulness that they can apply to this situation where they have to accept some uncertainty. I think it’s good to have a good, optimistic attitude, but realistic. But they also have to accept that they don’t actually know if this year is going to be good or bad.

Interviewer: Sucky or not.

Dr. Lin: But it’s better to think, “Yeah, it might be good. It could be better than expected.” You have to be comfortable with some level of uncertainty, but to have a good attitude.

Interviewer: So realistically, enter the New Year thinking, “This year may not be all flowers and unicorns, but that might be okay because that’s realistic, that’s how life is.”

Dr. Lin: Yes, yes. I would agree with that. I think it’s also important to try to be content with where you are in life. Not everybody has their career that they’re going to have forever. Some people are working jobs just to get by in school, and so they’re not at a stage where they’ve reached their goal. But I think if you’re on a path where you’re getting to your goal, then I think you can be content. I think perfection is often, in a way, easier than contentment.

Interviewer: One of the things that you mentioned earlier was being mindfulness of what happens in your life, what happens with your surroundings. Let’s say, for whatever reason, you enter the New Year because you know, realistically, it’s December 31st and then it’s January 1st, right? It’s not like, “Boom, next year’s tomorrow. I’m just going to wake up and all of a sudden it’s the New Year, I’m going to happy.”

So maybe, for the person that ended last year on a not so happy mood and they’re kind of adjusting during this first week, during this first month, what are some things that they can do to kind of slowly get themselves back to that positive state of mind, like you said?

Dr. Lin: Well, I think it’s always better to try to stay in the present moment to some extent. When people think too much about the past and they can get stuck there or just beat themselves up over it, I think it’s probably better to just go there on purpose and take what lessons they can learn from it, and then go forward.

Interviewer: Reflect on it.

Dr. Lin: Yes. Then, I also think that the same thing applies for thinking about the future. I think some people think too much about the future and end up having a lot more anxiety about it, even though they don’t have the power to control everything in the future. So if they’re going to plan for the future, they should go there on purpose, plan what they want to plan, and then accept some level of uncertainty as to what they need to do. Once they make those plans or take that action, then they have to just wait and see what happens. If they get new information or something else happens, then they can adjust.

Interviewer: At the end of it all, that’s kind of what being positive and being happy means, doesn’t it? It’s knowing your surrounding, knowing what’s going to happen in your life and being okay with it rather than thinking, “Oh gosh, life for me is just ending now.”

Interviewer: It goes on.

Interviewer: It goes on for everybody. Yes, things happen. It goes on.

Dr. Lin: I think people all have to have some sense of meaning in their life. So I hope people can identify what’s important to them and what’s meaningful for them, and pursue that.

Announcer: Have a question about a medical procedure? Want to learn more about a health condition? With over 2,000 interviews with our physicians and specialists, there’s a pretty good chance you’ll find what you want to know. Check it out at TheScopeRadio.com. 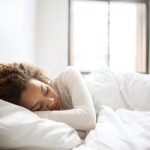 Trouble falling asleep at night is a problem affecting many Americans. On this Health Minute, neurologist and sleep specialist Dr. Chris Jones has three tips to help you get a better night’s sleep.

CAN EXERCISE REDUCE YOUR RISK FOR CANCER? 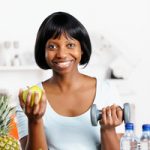 Diet and Exercise can actually help reduce a person’s risk of cancer, says Dr. John Sweetenham with the Huntsman Cancer Institute. Find out why this is and some quick diet and exercise tips that you can do to reduce your cancer risk on the Health Minute. Learn more about this topic in the full-length interview. 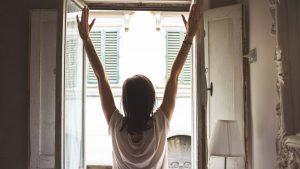 7 ways to stay safe and healthy during quarantine
April 20, 2020