Imagine not having access to the Internet, a cellphone or even a place to call home. Not having access to these basics can deprive a person of social interaction, education, health care and so much more. As of 2014, this was the reality for nearly 600,000 people across the nation, with over 13,000 people in Utah. A team of University of Utah undergraduates and alumni are working to create a low-cost electronic device for the homeless population who lack such basics so that they can receive reminders for doctors’ appointments.

Often lacking a fixed address and means of reliable communication with their health care providers, the homeless population cannot receive reminders for their appointments the traditional ways—phone call, email or text message. This lack of technology often leads to missed appointments.

Hannah Hendrickson, a junior majoring in Health, Society and Policy, first got the idea to work on creating a device to address the problem when her professor and U Director of Capstone Initiatives Stephen Goldsmith mentioned the need for one in her Honors Praxis Lab.

Fueled by her personal experience as a volunteer at the Fourth Street Clinic for Connect2Health, a non-profit that relies on student volunteers to refer underserved patients to health-related community resources, Hendrickson seized the opportunity and volunteered to start the project last fall. She soon partnered with Sam Vincent a nurse practitioner at the Fourth Street Clinic and a Doctor of Nursing Practice candidate at the U.

“The homeless population arguably has the most problems out of any other population; they don’t have shelter, have a slew of health problems and have unique barriers in attaining access to health care, such as not being able to receive appointment reminders. They’re the most vulnerable population and also the least visible.”

The team quickly grew when Rachel Anderson and current business major Stephanie Martin jumped on board. Goldsmith, Vincent and Stacy Bamberg, a former U engineering professor, agreed to advise the team.

Though the team is currently fine-tuning the prototype, the electronic device will, in essence, be similar to the buzzers patrons receive at restaurants while on the wait list. Clinics will provide patients with the device and program them to buzz and remind patients of their appointments one day before, the morning of and one hour before their next appointment.

The device, due to its small size, limited use of materials and limited functionality, will come at a very low cost to clinics.

To better understand the financial and health impacts of missed health care appointments, Hendrickson spent this past summer conducting a national survey with homeless medical providers to gather data on no show rates of homeless patients and how much money, on average, an organization loses annually due to missed appointments.

“It was pretty shocking to me to hear how much of a problem missed appointments were. It’s motivating to find that most clinics recognize the problem but don’t know what to do about it. I think our device has the capacity to change the entire homeless health care system,” said Hendrickson.

Though the data is preliminary, Hendrickson says the majority of respondents have estimated that $50,000-$100,000 is lost each year. Out of over 400 surveys distributed, Hendrickson has received roughly 50 responses, including one from the director of the Boston Homeless Clinic, and hopes to continue collecting data into the fall semester. 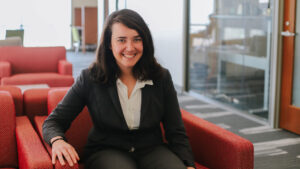