Acting as an advocate for others has always come naturally to U alum Mickey Ibarra. 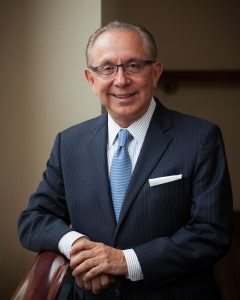 You can trace it to his childhood in foster care, when Ibarra watched out for and put his younger brother’s well-being ahead of his own interests.

5 “Mickeyisms” for leading a successful life

It is fitting that the first tip in Mickey Ibarra’s book “Mickeyisms: 30 Tips for Success” is this one: Smile.

If anyone knows how valuable it is to be able to smile even when things are hard, it is Ibarra.

“Smiling is important because it sets you apart in a positive way,” Ibarra writes in the book, published in 2015. “It helps others feel better about themselves and about being around you.”

Ibarra acknowledges the tips collected in the book, published in 2015, are not original or new, but each one has served him well — and he figured others might benefit from them, too. Here are five “Mickeyisms” to inspire you:

No. 5. Patience plus persistence
Patience plus persistence equals success — most often in equal doses. Whether you are starting a business or pursuing a personal goal, it’s seldom possible to win with just one of these qualities. Patience allows you to deal with failures or setbacks without being discouraged. Persistence allows you to stay the course and not give up prematurely. The good news is that sooner or later you will reach your goal.

No. 13. Good Luck
Good luck is the intersection where preparation meets opportunity. That’s why it is so important to convey to young people that learning is a lifelong endeavor. It is so important for us to get prepared for opportunities that we may not even imagine possible.

I could never have imagined, as a little Mexican kid who grew up in Utah foster care, that I would end up witnessing history in the making while working for the President of the United States. I will always be grateful to everyone who inspired and prepared me to seize this opportunity for public service when it came my way.

No. 23. Getting to ‘Yes’
I often talk to folks that are looking for employment, especially students who have graduated from high school, gone to college or graduate school but haven’t been able to find that first job. Although I give them lots of advice, the most important message is that every time you get a no, you’re one step closer to yes. Omar Minaya, former General Manager for the New York Mets, the first Latino general manager in major league baseball history, shared his story at the Latino Leaders Luncheon Series. He told us that he had applied 18 times to be a general manager and was always told “no.” But he used every one of those rejections to stay focused on his goal. On the 19th time he was told yes. You can get a hundred no’s, and that’s okay. You’re just looking for one yes.

It’s there in his work as a teacher for at-risk youth and as a representative for education associations. It weaves through his service as assistant to the president and director of Intergovernmental Affairs in the Clinton Administration as well as the work of his governmental relations firm, Ibarra Strategy Group. And it is at the heart of his founding of the Latino Leaders Network, and, with his brother David, sponsorship of four-year college scholarships for nearly 80 Latino students.

That lifetime of advocacy has earned Ibarra the highest honor bestowed by the Government of Mexico — the Ohtli Award — in recognition of his contributions to the well-being, prosperity and empowerment of Latino communities in the U.S.

The Consulate of Mexico in Salt Lake City presented the award, named for an Aztec word that means “pathfinder,” to Ibarra in May.

“I accept this high honor, the Ohtli Award, for my father, Francisco Ibarra, a Zapotec from Oaxaca who came to Utah in 1945 as a bracero to pick fruit in Spanish Fork,” Ibarra said. “And while you can take the man out of Mexico, you can never take Mexico out of the man. It is his courage, pride, hard work, love of Mexico and the United States that inspired my brother and me to always dream big.”

A formula for success

Ibarra’s life story is a testament to the achievement that is possible with a good education, good people and good, old-fashioned hard work.

“That is really the formula for success,” Ibarra said. “It certainly served me well.”

Ibarra’s father set the example. Francisco Ibarra came to Utah through the Bracero Program, which brought migrant laborers from Mexico to the U.S. to work in crop fields. He soon met and married a young woman, Bonnie Bird, from central Utah. And he landed a better job at Kennecott Copper.

While working at the mine, Francisco Ibarra was drafted into the U.S. Army and sent to Germany. Back in Utah, Bird struggled to care for their two sons and asked Ila and Cecil Smith, a Provo couple who had once been her foster parents, to take them.

Two years later, after the couple divorced, Ibarra and David were placed with another foster family through Children’s Services Society of Utah.

Francisco Ibarra returned to Utah and his job at Kennecott after his military service. He eventually took advantage of what was then a brand-new benefit for veterans: the opportunity to get an education through the G.I. Bill.

“He cashed that in at Hollywood Beauty College, attending night school,” Ibarra said.

The boys were briefly reunited with their father, who had remarried, but then were returned to what all thought would be a more stable home — once again joining the Smiths in Provo. Francisco Ibarra moved to Sacramento, where he opened the Mona Lisa House of Beauty hair salon.

For Ibarra and David, the experience of growing up in Utah County in the 1950s couldn’t have been more different.

Ibarra excelled in school and sports but said David, who was shy and angry about being separated from their parents, struggled. David also became the target of blatant racism.

“It was deeply embedded in me that we were together and I felt responsible for assisting David in making it through that experience,” Ibarra said. “By the time I was 15, it was really becoming serious.”

During what was supposed to be a brief visit with their father in Sacramento, David pushed to join him in California. Francisco Ibarra made it clear that, after all these years together, the teenage brothers could not be separated.

It wasn’t an easy decision for Ibarra.

“After some thought, I reached the conclusion that it was the right decision,” Ibarra said. “It was time to reunite, to leave Utah.”

In addition to being reunited with their father, the move allowed the brothers to discover their identity as Mexican American kids, Ibarra said.

“That wasn’t something we knew in Utah,” Ibarra said. “We knew we weren’t the same, based on our ethnicity, our skin color.”

One question, repeatedly asked by other kids, kept their difference front and center, Ibarra remembers: “So tell me, why is your name ‘Ibarra’ when you are living with the Smiths?”

“In a single question, it brought back all that hurt associated with being left behind,” he said.

In his father’s footsteps

Ibarra enlisted in the U.S. Army after high school. He went through basic training at Fort Ord — the same post where his father served. Three years later, Ibarra took another step on his father’s path: He used the G.I. Bill to get a bachelor’s degree in education from Brigham Young University in Provo, which he followed with a master’s degree from the University of Utah. Ibarra was named a U Alumnus of the Year in 2001 and a Hinckley Institute of Politics fellow in 2006. He received an honorary doctorate of humane letters from the U. in 2007.

Ibarra taught at an at-risk high school in Utah County, which led to his involvement in the Utah Education Association and then the National Education Association, where he served an internship while at BYU. From 1997-2001, he served as director of Intergovernmental Affairs in the Clinton White House. Ibarra then opened his own consulting firm in Washington, D.C.

This summer, the firm welcomed its 18th intern from the Hinckley Institute of Politics.

Ibarra said the internship provides great training for students, but also is “a benefit to us to use their education and enthusiasm to assist us, especially with the Latino Leaders Network.”

The Latino Leaders Network, which honors individuals who are making a positive impact for Latinos in the U.S., is one of the philanthropic endeavors Ibarra and his brother, a successful entrepreneur in Utah, created to give back to the system that benefited them so much. Ibarra featured the stories of 33 honorees in a book published in 2017, “Latino Leaders Speak: Personal Stories of Struggle and Triumph.”

Angelica Juarez, who served an internship with the Ibarra Strategy Group last summer, found the experience critical to understanding how to navigate the professional work environment.

“As a first-generation American, proud daughter of Mexican immigrants, and a first-generation college student, this experience in the capital of our nation has been invaluable to me,” Juarez said. “It could not have been possible without all of my parents’ labor and sacrifices that brought me here or without the Hinckley Institute of Politics. In the words of my new mentor and boss, Mickey Ibarra, ‘Dream Big,’ Mickeyism No. 30.”

The brothers also established the Ibarra Foundation Scholarship, which provides two-year and four-year college scholarships to Latinos in Utah; to date, the foundation has supported nearly 80 students.

“I made a pledge at 67 that for all the time I have remaining I am going to do all I can to share what I’ve learned through writing, speaking and teaching,” Ibarra said. “I started my career at the top — as a teacher — and this is an opportunity to end my career at the top, teaching.”