Bob Woodward had been working as a night police reporter at The Washington Post for nine months when he got a tip about what he thought was a routine burglary.

It turned out to be anything but.

That 1972 burglary — of the Democratic National Committee headquarters at the Watergate office complex in Washington, D.C. — would lead to a major political scandal and culminate in the resignation of then President Richard Nixon. That story, known now as the Watergate Scandal, led to a Pulitzer Prize in 1973 and its effects have solidified the media’s role as a watchdog in American politics. 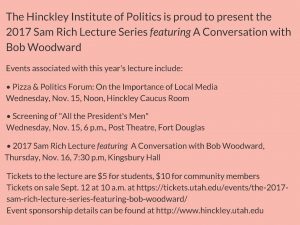 Woodward, now an associate editor at the Post, has gone on to write 18 bestselling non-fiction books that provide revealing insights into the lives and careers of presidents, politicians and the workings of the supreme court.

His best-known work, a book co-authored by Carl Bernstein, is “All The President’s Men.” TIME magazine has described the work as “perhaps the most influential piece of journalism in history,” and it is credited with inspiring thousands of journalism careers. Its success resulted in a movie starring Robert Redford as Woodward and Dustin Hoffman as Bernstein.

Woodward will be coming to the U in November to talk about his remarkable journalistic career chronicling politics at the nation’s highest levels as the guest of the 2017 Sam Rich Lecture Series, sponsored by the Hinckley Institute of Politics.

The conversation, which will be moderated by Doug Fabrizio, host and executive producer of KUER 90.1’s RadioWest program, is set for Thursday, Nov. 16, at Kingsbury Hall. Tickets are $5 for students and $10 for community members and will be available for purchase on Tuesday, Sept. 12, at 10 a.m. on Kingsbury Hall’s website.

Students who buy a ticket can also pick up a free copy of Woodward’s book, “All The President’s Men,” at the Hinckley Institute while supplies last.

Additionally, students are invited to a special screening of “All the President’s Men” on Nov. 15 at the Post Theatre in Fort Douglas. While this event is free and open to the public, tickets are required. To reserve a ticket, please visit the event page here.

Woodward graduated from Yale University in 1965 and spent five years as a communications officer in the U.S. Navy before becoming a journalist. He joined The Washington Post in 1971 and has said he was just hoping to get off the police beat when the Watergate story broke.

Over the years, he has received numerous honors for his reporting. Woodward was the lead reporter for the Post’s articles on the aftermath of the Sept. 11 terrorist attacks, which won the National Affairs Pulitzer Prize — journalism’s highest accolade — in 2002.

His most recent book is “The Last of the President’s Men,” which Politico called “another fascinating gift go history by D.C.’s most relentless reporter.” It focuses on Alexander Butterfield, who served as a deputy to Chief of Staff H.R. Haldeman —  a key figure in the Watergate scandal.