Lyuba Basin, rare books curator, has been selected to represent The University of Utah in the Western Association of Graduate Schools (WAGS)/ProQuest competition for the Distinguished Master’s Thesis Award. The award recognizes scholarly achievement at the master’s level, in both STEM and non-STEM disciplines. The U participates as one of the member institutions of WAGS. Nominations from the University are based on originality, significance of the study, overall quality, outcomes, and accomplishments. The regional WAGS competition will be held in Albuquerque, New Mexico in March 2020. 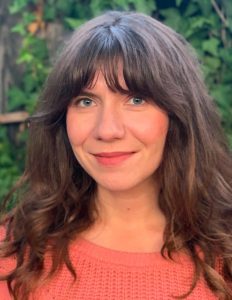 Regarding her nomination, Basin said, “As excited as I am about representing The University of Utah, I am even more excited about representing the library and the Rare Books Department. Part of my thesis included an analysis of books printed by the Untide Press, which are held in our rare book collections. The books’ history tells an incredible story of America during the early part of the 20th century.”

Basin’s winning thesis, “It’s What Matters: The Materiality of the Book in the 20th Century,” also  analyzes avant-garde works of the Russian Futurists published during World War I and leading up to the Russian Revolution. To study these, Basin traveled to the Getty Research Institute’s library in Los Angeles, California. Basin draws parallels between the processes and pressures of running an underground press, emphasizing how the material and artistic qualities of the texts, their method of production, and the ways in which they have been disseminated are converging factors in the understanding of content and context.

“In my thesis I argue that the materiality of the book – the physical and artistic qualities of such texts – can also be ‘read’ and ‘analyzed’…Regardless of form, every piece of text is imbued with material information, ultimately shaping the way we read.”

In a letter of commendation, Craig Dworkin, Professor in the Department of English at the University of Utah wrote, “…the quality of Lyuba Basin’s research is first rate, and matched only by its significance as a contribution to the scholarship on particular and too-often neglected subjects (Russian Futurism, pacifist literature, censorship and innovation) and as a model for further interdisciplinary work on similar subjects. Lyuba has…undertaken important archival research and offered…analyses of important, nearly lost documents of mid-century American poetry and poetics…she has concretely demonstrated the payoff for the kind of interdisciplinary work so often given lip service.”