13 May 2021— Today, the rocks of the Hanna Formation in south-central Wyoming are hundreds of miles away from the nearest ocean. But around 58 million years ago, Wyoming was oceanfront property, with large hippo-like mammals traipsing through nearshore lagoons. 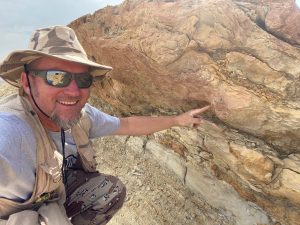 Anton Wroblewski points to an underprint made 58 million years ago by a heavy mammal (likely Coryphodon) walking on the deltaic deposits above. Underprints form when sediment is displaced downward by footsteps from heavy animals.

In a study published in Scientific Reports, geologist Anton Wroblewski, an adjunct associate professor in the Department of Geology & Geophysics, and applied biodiversity scientist Bonnie Gulas-Wroblewski of the Texas A&M Natural Resources Institute report the discovery of several sets of fossilized tracks, likely from the brown bear-sized Coryphodon, that represent the earliest known evidence of mammals gathering near an ocean.

The tracks that the Drs. Wroblewski found in the Hanna Formation of Wyoming include underprints, impressions in soft sediment made when heavy animals walk on overlying sediment layers, as well as prints pressed into the surfaces of ancient tidal flats. Now preserved in sandstone, the tracks are more than half a mile (one kilometer) long and were made by two different animals, one with four toes and one with five. The five-toed tracks are consistent with Coryphodon, a semi-aquatic mammal similar to a hippopotamus. The owner of the four-toed tracks remains a mystery. 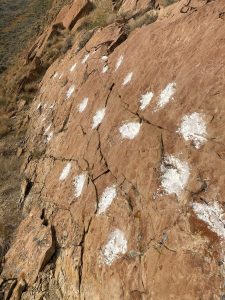 Section of the 58-million-year-old tracksite demonstrating near-vertical tilting of the originally horizontal bedding with three separate trackways made by five-toed mammals walking in parallel.

“Paleontologists have been working in this area for thirty years, but they’ve been looking for bones, leaf fossils, and pollen, so they didn’t notice footprints or trackways,” Wroblewski says. He first saw the tracks in September 2019. “When I found them, it was late afternoon and the setting sun hit them at just the right angle to make them visible on the tilted slabs of sandstone. At first, I couldn’t believe what I was seeing; I had walked by this outcrop for years without noticing them. Once I saw the first few, I followed out the ridge of sandstone and realized they were part of a much larger, more extensive trackway.”

Fossilized plants and pollen helped the researchers determine the age of the tracks to be around 58 million years old, during the Paleocene epoch. Before this finding, the earliest known evidence of mammals interacting with marine environments came from the Eocene epoch, around 9.4 million years later. Wroblewski says that the Hanna Formation tracks are the first Paleocene mammal tracks found in the USA and only the fourth in the world, with two sets of tracks previously found in Canada and one in Svalbard, Norway. It’s also the largest accumulation of Paleocene mammal tracks in the world in both aerial extent and the absolute number of tracks, he says. With at least two species leaving the tracks, it’s also the most taxonomically diverse. 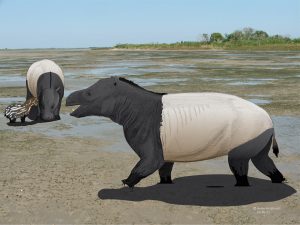 A reconstruction of the brown-bear-sized mammals (Coryphodon) that made thousands of tracks in a 58-million-year-old, brackish water lagoon in what is now southern Wyoming.

Today’s large mammals congregate near marine environments for a variety of reasons, including protection from predators and biting insects, foraging for unique foods, and access to salt sources, which may have been limited in the tropical forests of North America during the Paleocene. The researchers say ancient mammals may have had similar reasons for seeking out a day at the beach.

The research shows, Wroblewski says, that hypotheses of behavior and evolution based on isotopic, molecular and body fossil data can be empirically tested using trace fossils. “No other line of evidence directly records behaviors of extinct organisms preserved in their preferred habitats,” he says. “There’s still a lot of important information out there in the rocks, waiting for somebody to spot it when the lighting is just right!” 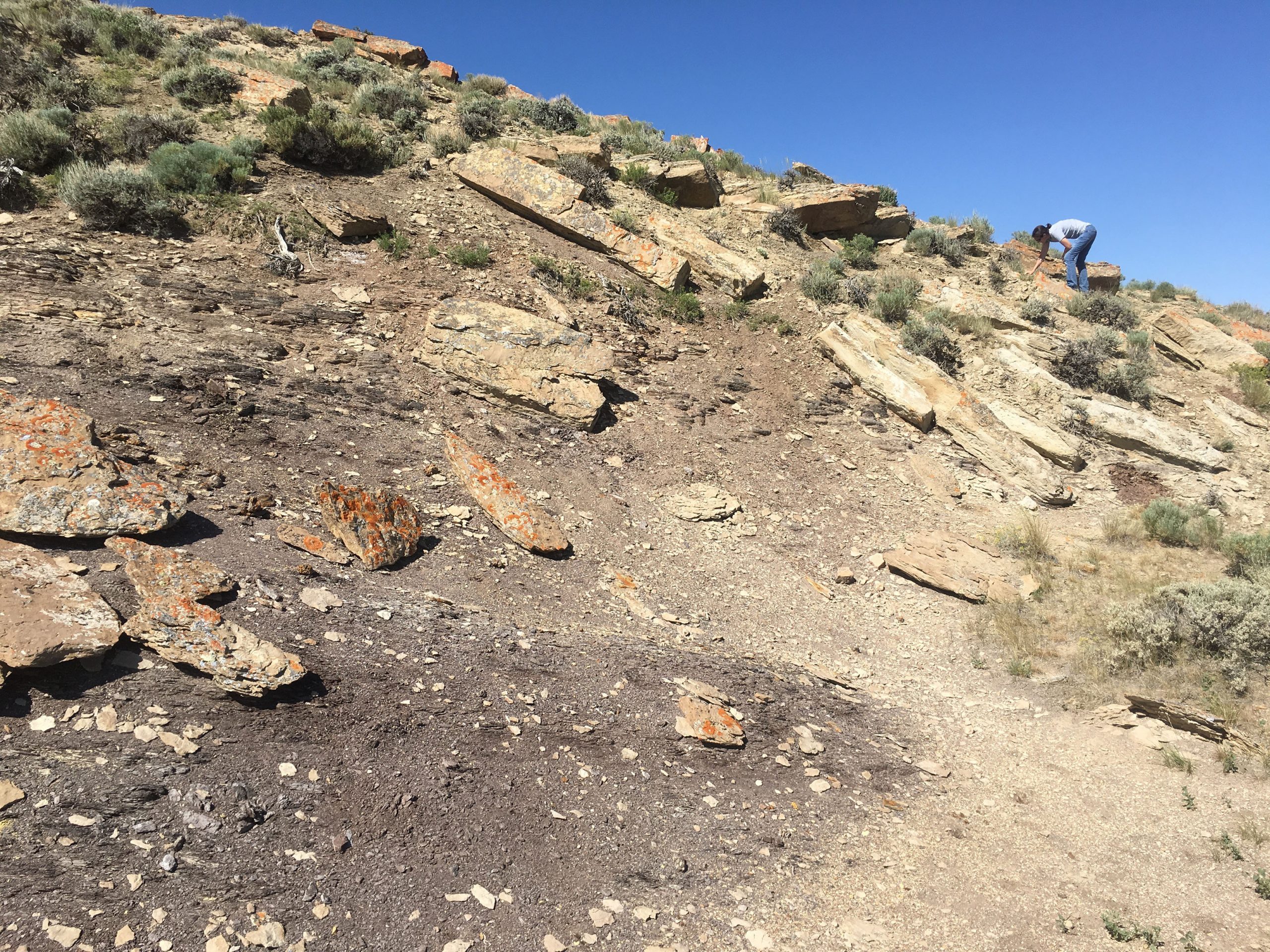 Bonnie Gulas-Wroblewski exploring sandstone outcrops in the Hanna Formation, searching for trace fossils and other evidence of Paleocene life.