Office of the Registrar
registrar.utah.edu 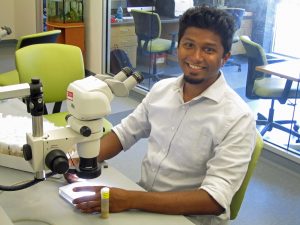 The Pew Charitable Trusts named University of Utah biologist Nitin Phadnis as a Pew scholar in the biomedical sciences. He is among 22 winners of this year’s awards, which are given to “exceptional early career scientists … particularly young researchers with innovative approaches and ideas.”

Pew awarded $240,000 over four years to Phadnis, an assistant professor who holds the Mario Capecchi endowed chair for biology.

“For more than 30 years, the Pew Charitable Trusts has proudly supported outstanding biomedical researchers at the start of their careers,” says Rebecca W. Rimel, the group’s president and CEO. “The members of this exemplary group join a community of scientists that they will learn with, and learn from, for the rest of their lives.”

Phadnis says his research “will enhance our understanding of the genetic warfare that can shape the evolution of species.”

He explains that components of an organism’s genome – or genetic blueprint – “cheat” so they can transmit themselves into future generations, even if it hurts the organism, which fights back by trying to suppress these cheating genome components. This constant battle can lead to the rapid evolution of important genes. When populations of the same species live in different geographic areas, the rapid changes in their genes can make once compatible populations of the same species evolve into two separate species.

A large part of Phadnis’ research focuses on studying these genetic battles “and showing that they are a key driver in the origins of new species,” he says.

Phadnis received a doctorate in evolutionary genetics in 2008 from the University of Rochester, and then completed a postdoctoral fellowship at the Fred Hutchinson Cancer Research Center in Seattle in 2013 before joining the Utah faculty. 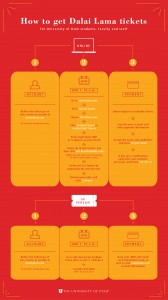 The University of Utah and the Utah Tibet Foundation welcome His Holiness the 14th Dalai Lama of Tibet to the Huntsman Center on Tuesday, June 21 at 1:30 p.m.

What You Need to Know

A live stream will be available at utah.edu/live.

THE SUMMER 2016 CONTINUUM IS NOW AVAILABLE 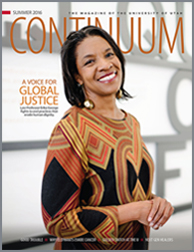 In our cover story, meet U law professor Erika George, who fights to protect human dignity around the globe.

A sneak peek at more in this issue:

Read about a unique internship that guides Native American students from across the country toward careers in science and medicine.

Why don’t elephants get cancer? Dr. Joshua Schiffman explains this and how his research impacts prevention of the disease in humans.

What does it mean to get in good trouble? Students find out by studying the life of civil rights icon John Lewis.

As usual, you can find plenty of extras online, including videos and extended photo galleries.

We’d love to hear your opinion about these stories or anything else in the magazine. 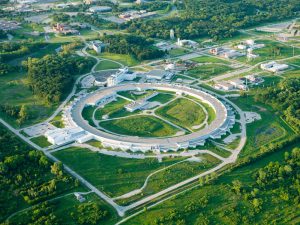 Argonne National Laboratory has launched an new innovation incubator called Chain Reaction Innovation (CRI) that will provide $4.4 million in funds to energy and physical science based startups. This is the Midwest’s first energy and science technology incubator that embeds entrepreneurs from industry and academia into a national laboratory. Chain Reaction Innovations will accelerate the scale-up and commercial deployment of nascent technologies through unparalleled access to cutting-edge research facilities and cross-disciplinary experts at Argonne while simultaneously providing business, legal, and financial support through partnerships with regional mentors.

Participants benefit in the following ways for two years:
Access at Argonne to office space, cutting-edge R&D equipment and guidance in the use of that equipment
Potential collaboration partners from the 1,600 engineers and scientists working in a multitude of disciplines at Argonne
A fellowship that covers salary and benefits
A connection to partner mentor organization that offer assistance in developing business strategies, conducting market research, and finding long-term financing and potential commercial partners.