How to submit documentation with personally identifiable information to the U 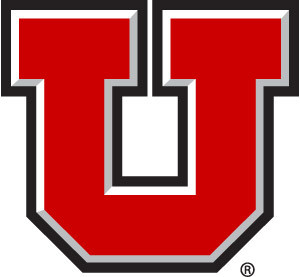 As you prepare for the upcoming semesters, you may need to provide personally identifiable information to various university offices. This applies to documents containing any of the following types of information: Social Security number, driver’s license number, alien registration number, and financial account information (tax documentation).

Based on recent guidance from the federal government, and as part of our efforts to protect your personal information, please do not send this information via email.

The university is committed to taking every precaution necessary to protect your personal information.  It is important that documents containing personally identifiable information only be submitted to the university by mail, fax, or in person.

Further guidance will be forthcoming. If you have specific questions, please contact Corey Roach directly at corey.roach@utah.edu or 801-587-9199.

A recent upgrade to the university’s authentication provider has necessitated a change to the way users will be logged out of Box and Kronos. Starting Wednesday, Dec. 20, 2017 at 5:30 p.m., when users log out from within the Box or Kronos applications, they will also be logged out of all other CAS-enabled University applications at that time, unless the user is actively using another application in a separate tab. So long as that tab remains open, the user will stay logged in to that particular application. To access subsequent U apps after logging out of Box or Kronos (e.g. CIS), users will simply need to log back in. 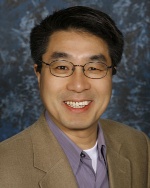 Zhigang Zak Fang, professor in the Dept. of Metallurgical Engineering in the College of Mines and Earth Sciences, has been selected as a 2017 National Academy of Inventors fellow. “Election as an NAI Fellow is a high honor bestowed upon academic innovators and inventors who have demonstrated a prolific spirit of innovation in creating or facilitating outstanding inventions and innovations that have made a tangible impact on quality of life, economic development, and the welfare of society,” said an NAI spokesperson.

Professor Fang’s research focuses on applied physical science with practical applications, including in the area of metals extraction, nano powder synthesis, sintering, microstructure, and mechanical properties of metal alloys made from metal powders. He is particularly focused on metal materials used for energy efficiency, energy storage, or energy production. 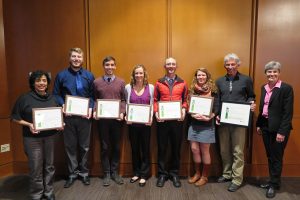 The University of Utah is partnering with Alta Ski Area to recognize students, faculty and staff with the fourth Alta Sustainability Leadership Awards. The awards recognize members of the university community who demonstrate leadership in sustainability education, research or campus/community initiatives. An award of $2,500 is given in four award categories.

The awards will be presented on Feb. 15, 2018 at the Environment and Sustainability Research Symposium.

For more information on applying, or to nominate yourself or a colleague, click here. 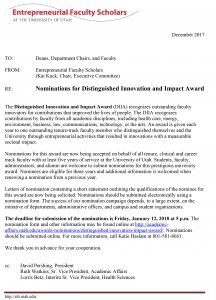 The Distinguished Innovation and Impact Award (DIIA) recognizes outstanding faculty innovators for contributions that improved the lives of people. The DIIA recognizes contributions by faculty from all academic disciplines, including health care, energy, environment, business, law, communications, technology or the arts.

The Center on Aging sponsors an annual grant program to promote the development of aging research at the University of Utah. The goal of this program is to encourage new investigator career development, attract established investigators to aging research, and stimulate interdisciplinary research collaborations – ultimately leading to new externally funded research. Five one-year $20,000 projects will be awarded.

Any questions please contact either Mark Supiano or Heather Podolan. 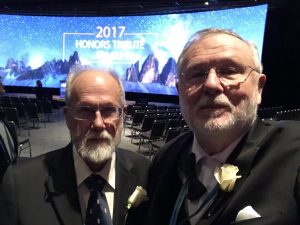 University of Utah distinguished professors Thure E. Cerling (Geology and Geophysics) and James R. Ehleringer (Biology) were awarded the Excellence in Earth and Space Science Education Award at the annual meeting of the American Geophysical Union in New Orleans, Louisiana. They were lauded for the annual two-week training course nicknamed “Isocamp” that teaches scientists from around the world how to collect and use stable isotope data in their research.

Their citation states: “Thure Cerling and James Ehleringer have created a transformative learning and networking experience for multiple academic generations of researchers, and established the archetypical model of a successful summer short course for colleagues around the country.” 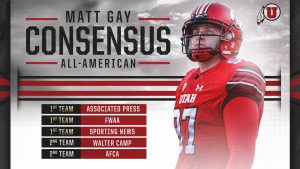 Utah junior kicker Matt Gay was named a first-team Sporting News and second-team American Football Coaches Association (AFCA) All-American to clinch consensus All-America status. While the consensus All-America team won’t be officially announced until tomorrow, Gay has locked up a spot by earning first-team status on three of the five teams used to determine consensus honors while making the second team on the other two.

The consensus-qualifying first teams Gay made were the AP, Football Writers Association of America (FWAA) and Sporting News. Gay, who won the 2017 Lou Groza Award as the nation’s best kicker, was named to the Walter Camp and AFCA second teams.

Gay’s 27 field goals and 31 attempts are school records, while his 118 points ranks second all-time in a season at Utah. He is the first Utah kicker to make five 50+ field goals in a season.

He played soccer at Utah Valley in 2014 and 2016. His only previous football experience came as a high school senior at Orem High School in 2011. 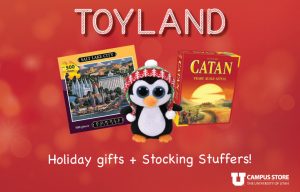 It’s not too late to get those gifts and stocking stuffers you need to put under the tree this holiday season. Toyland at the University Campus Store has stocked their shelves with fun toys, stuffed animals, games, gadgets, and more, making your holiday shopping easier than ever this year.  Whether you forgot to get that perfect gift for your favorite niece, or that brother-in-law you never know what to get, or your spouse who claims “they don’t need anything this year” (but we all know that’s not true), let the Campus Store help you check one more thing off your to-do list.

Stop by the Campus Store today and get your holiday shopping done, so you can enjoy the most wonderful time of the year with no stressful last-minute lists.

On Monday, Dec. 4, the Academic Senate passed the following items:

The next Academic Senate meeting will be Monday, Jan. 8 at 3 p.m. in the Moot Courtroom of the College of Law. Senate meetings are open to the public.

The agenda will be posted here approximately one week before the meeting. 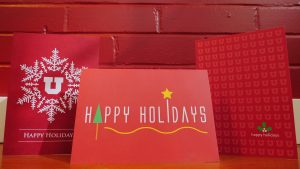 Get a head start on the holiday season by ordering your greeting cards from University Print & Mail Services. Conveniently place your order online and choose from more than 30 designs, enhanced by your own personalized message. Orders are typically completed in five business days and can be picked up or delivered to your office for free. Making this annual task even easier, Print & Mail can address your envelopes, apply postage and place your cards in the mail for you.

Both personal and office orders are welcome. To view designs online and place your order, visit printing.utah.edu. 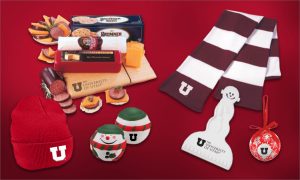 In need of holiday gifts or giveaways for those special people on your list this year? Let University Print & Mail help you design and customize one-of-a-kind gifts for your department or personal use.