Humans of the U: Harry Cross Jr.

"I find my time here fascinating, and try to contribute as much as I can to improving this already great university.”
Jens Nilson - presidential intern, University Marketing & Communications

“Honestly, if I had to describe my life in just one word, it would be ‘chaos,’ but I mean that in the best possible way. I’ve walked many different paths, often simultaneously, and I think it all stems from my love of learning. From high school to where I am now, my life has been guided by my appreciation for, and pursuit of, knowledge and experiences.

After graduating from high school, I got into film production. I had the opportunity to be involved with everything from a public service announcement with no budget to a $200 million movie. Directing, writing, producing, I did a bit of everything, and had a fantastic time learning how the industry works. However, after working in film for several years, I decided that I wanted to get a degree, and ended up doing my undergraduate work in art administration at Westminster. I also began my career as a DJ during this time, taking gigs on the side in addition to whatever I was working on at the time. 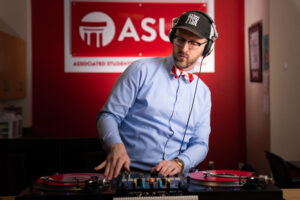 Beginning in 2010, my career as a DJ took off like a rocket. Within two years of picking up the craft, I secured a nightclub residency at Jam, an award-winning nightclub in downtown SLC, where I played sets every Friday and Saturday for four years to a packed house. Additionally, I got to headline the Gay Pride Festival for five consecutive years. In 2012 I was even voted best DJ in the state.

After some time following my undergraduate work, doing odd jobs and being a business owner (D W Fisk LLC), I returned to Westminster to get my MBA. I still use my degree extensively in my current job as budget and finance coordinator for ASUU.

Some people may feel a sense of disconnect comparing my education in administration and business with my creative efforts of DJing, or my work in film, but I don’t see much of a difference. Budgeting and finance are all about taking what you see in front of you and turning it into a picture of what has been happening, and what the future might be. You’re taking information and using it to shape the goals and actions of an organization. While you might not get the impression from listening to a business professor lecture for two hours, I believe finance is a fantastic blend of analytical and creative thinking.

I first found that I enjoyed working with students during my time at Westminster where I was a full-time staff member while also working on my MBA. I love meeting with students and being able to say, ‘I know it might suck right now, but I’ve been there, I’ve been through the struggle, and I know you can do it!’ My position with ASUU also allows me to stretch myself in ways I haven’t previously. My current role puts me in a position where I’m not just making an administrative decision for the students, I have the opportunity to guide students into making those decisions themselves, in a learning environment. You don’t get an experience like this in a classroom, and it’s awesome to help students learn to weigh and judge the potential consequences of various choices, and then watch them make the difficult decisions. Working with students is inspiring, hilarious, entertaining, enlightening…a whole slew of emotions comes to mind.

I find my time here fascinating, and try to contribute as much as I can to improving this already great university.”