This piece was originally published on Good Notes.

This year, we mark the 50th anniversary of the Utah Physician Assistant Program (UPAP), one of the oldest PA education programs in the country. I’m proud to have been involved with it for 40 of those 50 years. It’s tempting to look back to recount how it became one of the highest-rated physician assistant programs in the country. But what matters even more is where we are going, not where we’ve been. 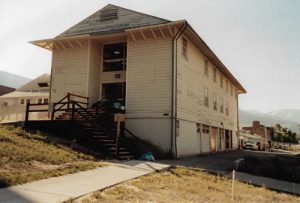 UPAP’s second home was Building 528, one of the last Ft. Douglas army barracks on campus.

Physician Assistants will continue to be there for patients, just as they’ve always been. In surveys and other evaluations of care teams, patients frequently say, “Gosh, I love my PA.” “They spend more time with me.” “They really know me.” “They’re more genuine.” “They comfort and calm me.” But it may be a challenge maintaining such admiration moving forward as PAs will perform an increasingly vital role in health care. They are already under the same constraints as physicians with data, computers, and electronic medical records. PAs now diagnose and prescribe medicine across all specialties. They are caring for and treating patients on a higher level than what was envisioned in 1970. It’s been rewarding for me to have witnessed the valuable progression. As these jobs continue to expand, we need to be sure we don’t lose sight of the highly appreciated care qualities for which PAs are known: listening to patients and providing compassionate, cost-effective care.

Going forward, we’ll need to look very carefully at what the needs are for physician assistants and stay agile enough to meet them. They will require as much training as they get now, in a relatively short period of time. PAs are trained in less time than physicians, but we try to pick key areas in which they need to perform—and the functions they’ll be asked to perform. The UPAP program will remain a key component of the Spencer Fox Eccles School of Medicine. For 50 years, UPAP has been connected to a great academic medical center, and that is an enormous advantage for our program and its graduates. Within an educational institution like ours, all the providers work as a team: PAs, nurse practitioners, physicians, pharmacists, lab people, and specialists. At U of U Health, providers work together in the best interest of patients. And it’s really a great patient care environment.

The Utah Physician Assistant Program is committed to training PAs who will be prepared to meet the challenges of providing high-quality care to patients in medically underserved and rural communities. Our program, which began as staff was hired in 1970, was born out of social turmoil of the 1960s and the lack of access to health care, particularly in rural areas. It was the era of what I call a “Grand Social Experiment.” In Washington, Medicare and Medicaid were created, the White House declared a War on Poverty, and expansive civil rights legislation was passed. In a way, PAs were to become medical boots on the ground in that war. Our first class started in 1971 and graduated in 1972. 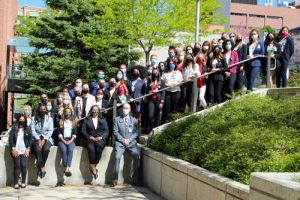 Stethoscope Ceremony on May 13, 2021, for incoming UPAP students.

As befits a public university program, starting well over 20 years ago, we put a strong emphasis on diversity within our program. More recently, 38 percent of students in the last five years have been people of color. This dynamic trend will continue in the coming years. Fifty years ago, our program started out with mostly returning corpsmen and medics, a more homogeneous set of students. But, over time, as there were fewer returning veterans from Vietnam, we branched out to people with a variety of backgrounds and experiences in a wide variety of jobs, including paramedics and EMTs.

The student cohort draws on the strengths of this experience in a wide array of working areas. Sometimes 10, 15, or 20 years they were paramedics or worked in hospitals, but they wanted to go further and be more actively involved in the care of patients. Drawing on the strength of classmates is just one example of how student-centered UPAP is—with no hierarchy. You will not hear a student brag, “I’m going to graduate as the top of my class.” We don’t think that way. Instead, it’s, “We have this cohort and we’re all going to be successful. We’re all going to get through this together!” It’s difficult to imagine a stronger sense of camaraderie. That is key to educating our next generation of PAs: instilling a commitment to caring for patients.

What could be more satisfying than making lives better? What’s more fulfilling? The level of responsibility and the job satisfaction you get as a physician assistant is very high. I just picked a book off the shelf called 150 Best Jobs for a Better World by Laurence Shatkin. It covers occupations that allow you to do well for others or society and yourself. Careers are ranked by satisfaction, pay, growth, annual openings, and several other categories. Whatever the category, PAs are right up there as either first, second, or third. There is a strong correlation between creating a better world and enjoying your work.

But it’s competitive, too: We admit 68 applicants every year out of close to 3,000 applicants. It’s an enormous challenge to winnow that down. Every year, we’re letting wonderful people go elsewhere. But we hope we are getting the best of the bunch. We want to graduate good people who are going to do good things in their communities, for another half-century and beyond. 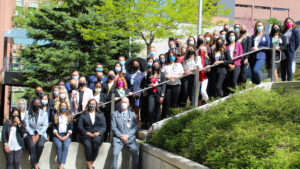