Scientists from around the world have assessed the planet’s 78 mountain glacier–based water systems and, for the first time, ranked them in order of their importance to adjacent lowland communities, as well as their vulnerability to future environmental and socioeconomic changes. These systems, known as mountain water towers, store and transport water via glaciers, snow packs, lakes and streams, thereby supplying invaluable water resources to 1.9 billion people globally—roughly a quarter of the world’s population.

The research, published in the prestigious scientific journal Nature, provides evidence that global water towers are at risk, in many cases critically, due to the threats of climate change, growing populations, mismanagement of water resources, and other geopolitical factors. Further, the authors conclude that it is essential to develop international, mountain-specific conservation and climate change adaptation policies and strategies to safeguard both ecosystems and people downstream. 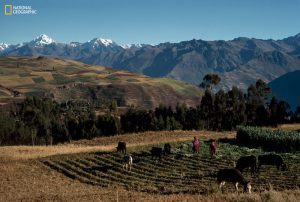 Farmers tend to their fields high in the Peruvian Andes. New research supported by National Geographic and Rolex’s Perpetual Planet partnership highlights the importance and vulnerability of the world’s glacier-based water systems, including the northern Andes, where mountain-derived water is critically required for irrigating crops. Learn more at natgeo.com/PerpetualPlanet.

Globally, the most relied-upon mountain system is the Indus water tower in Asia, according to their research. The Indus water tower—made up of vast areas of the Himalayan mountain range and covering portions of Afghanistan, China, India and Pakistan—is also one of the most vulnerable. High-ranking water tower systems on other continents are the southern Andes, the Rocky Mountains and the European Alps.

To determine the importance of these 78 water towers, researchers analyzed the various factors that determine how reliant downstream communities are upon the supplies of water from these systems. They also assessed each water tower to determine the vulnerability of the water resources, as well as the people and ecosystems that depend on them, based on predictions of future climate and socioeconomic changes.

Of the 78 global water towers identified, the following are the five most relied-upon systems by continent:

Walter Immerzeel and Arthur Lutz of Utrecht University, longtime researchers of water and climate change in high mountain Asia, led the collaboration of 32 scientists from around the world. Summer Rupper, geography professor at the University of Utah, was a co-author.

“What is unique about our study is that we have assessed the water towers’ importance, not only by looking at how much water they store and provide, but also how much mountain water is needed downstream and how vulnerable these systems and communities are to a number of likely changes in the next few decades,” said Immerzeel. Lutz added, “By assessing all glacial water towers on Earth, we identified the key basins that should be on top of regional and global political agendas.” 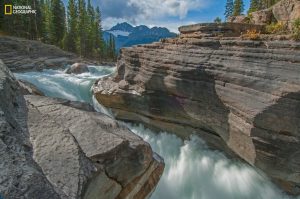 The Mistaya River courses through Mistaya Canyon in Canada’s Rocky Mountains. This region is one of the most relied-upon water towers in North America, according to new research supported by National Geographic and Rolex’s Perpetual Planet partnership highlighting the importance and vulnerability of the world’s glacier-based water systems. Learn more at natgeo.com/PerpetualPlanet.

In June, Rupper co-authored the most comprehensive study of how the volume of glaciers has changed across the Himalaya since the start of the 21st century. The analysis spanning 40 years of satellite imagery showed that the glaciers have lost more than a vertical foot and a half of ice each year since 2000, double the melting that occurred between 1975 and 2000.

“The Himalaya and Karakoram Mountains are the most important water towers on Earth not only because they have so much ice and snow, but also because massive populations of people downstream rely on it for water,” said Rupper. “This is an absolutely critical region of the planet where the actions we’re making here in the U.S. are going to have serious implications for people living in Asia as well.”

Understanding glaciers is important, but Rupper stressed that this paper is powerful because of its interdisciplinary nature.

“I need to continue to study  glaciers, but this research needs to be put into context of the whole system. We have to marry many disciplines to say something about the larger global systems and the impacts of climate change in robust ways. And that means you’re going to be one in thirty authors on a study like this,” she said. “I’m as proud to be on this paper, as any I’ve published.”

This research was supported by National Geographic and Rolex as part of their Perpetual Planet partnership, which aims to shine a light on the challenges facing the Earth’s critical life-support systems, support science and exploration of these systems, and empower leaders around the world to develop solutions to protect the planet. 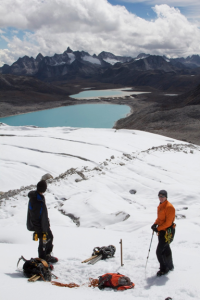 “Mountains are iconic and sacred places around the world, but the critical role they play in sustaining life on Earth is not well understood,” said Jonathan Baillie, executive vice president and chief scientist at the National Geographic Society. “This research will help decision-makers, on global and local levels, prioritize where action should be taken to protect mountain systems, the resources they provide, and the people who depend on them.”

This was adapted from a release by National Geographic. 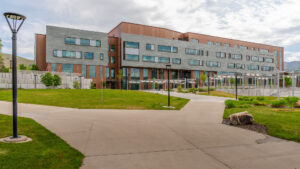