“Why not law school?”

Bernadine Ott was working in the University of Utah U Card office as the end of her time as a political science undergraduate student approached. She was talking with her supervisor about her plans for after graduation when he brought up law school as an option. Her supervisor, who’s married to a successful attorney, saw in Ott many of the qualities that helped his wife excel in the legal field.

“I think you should seriously consider it.”

Her supervisor’s advice stuck with her, and Ott began looking into the law as a career. The first thing she noticed was a clear lack of representation in the legal field, especially of Pacific Islanders such as herself. Ott was born and raised on the island of American Samoa and her Samoan heritage is immensely important to her.

“If there’s only one voice and only one type of experience, then you’re erasing narratives,” she said. “You don’t know what you don’t know. Especially in the legal field, it’s important to be able to relate to the people that you’re serving, whether that’s with different educational backgrounds, socioeconomic status, culture, or otherwise.”

Another thing Ott noticed about the legal field – it was inaccessible to the average person. Between confusing legal jargon and highly complicated processes, a lay person can’t understand the system unless they have an attorney guiding them. Ott felt there had to be a better way to make legal services accessible.

This solidified her decision to enter the legal field, so she joined the S.J. Quinney College of Law as a student in 2019.

Throughout her time at law school, Ott lived up to her commitment to make legal services more accessible. She spent time volunteering with Catholic Community Services as a refugee family mentor, where she helped support clients in their cultural adjustment to the United States during their first two years of resettlement. She also interned at Immigrant Legal Services, where she assisted immigrants and refugees in applying for green cards, visas, and asylum.

One of Ott’s favorite law school experiences was her time in the Creative Advocacy Lab, a clinical class at the S.J. Quinney College of Law that creates practical solutions for people who have been historically underserved by the legal system. During her time in this clinic, Ott and her team worked with International Rescue Committee to create resources that will help refugees and immigrants as they interact with law enforcement.

“The Creative Advocacy Lab has been really great because it’s so different from all my other law school classes,” she said. “It has pushed me to think outside of the box. It has shown me that there are other ways to communicate the law to people.”

Another standout experience for Ott was the Oxford Consortium for Human Rights’ week-long workshop, titled “Human Rights, Armed Conflict and the Struggle for Peace.” She was hand-selected to attend this workshop in England last spring, where she and a few other classmates learned about human rights, armed conflict, foreign policy, peacemaking, and more.

“Just being there was very inspiring,” Ott said. “Being surrounded by people who’ve dedicated decades of their life to humanitarian work and seeing students who have a passion and are already doing the work in their communities was enlightening. The experience was a wake-up call for me because being in that environment made it easier for me to envision the possibilities of what I could do to serve communities that need help.”

With a passion for many areas of advocacy, Ott isn’t tied to one career path moving forward. She is interested in possibly going back to school for more degrees. She may eventually end up back on American Samoa to create a nonprofit focused on education. She knows her future career will be filled with making legal services more accessible and making the legal field more representative.

“I want to find where I can make the most change and help the most people,” she said. 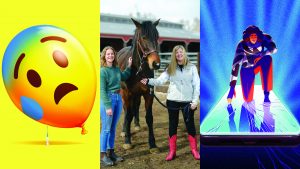