If you were a time traveler and returned to the western U.S. during the Late Jurassic you would land in a much different world. The Rocky Mountains were yet to be born and instead, there was a vast Serengeti-like plain extending for millions of square miles—an ecosystem now preserved in what earth scientists call the Morrison Formation. If you were an astute observer you might notice of the absence of flowering trees and grasses, their places occupied by stands of tall conifers and fields of ferns. But your attention would most decidedly be drawn to the dinosaurs that roamed this ancient ecosystem. You could safely watch the groups of sauropods, the giant plant-eaters—behemoths even among dinosaurs—or the small, fleet-footed plant-eaters like Camptosaurus and Dryosaurus. But you would need to keep your eyes peeled for the ever-present predators who would quickly take you for a low carbohydrate snack. 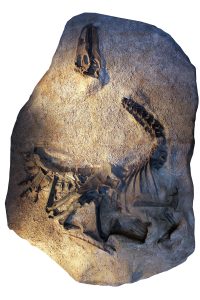 A cast of the skeleton and skull of Allosaurus jimmadseni as it was discovered and now on exhibit at Dinosaur National Monument in Utah. The original skeleton was molded and cast before it was taken apart and prepared for study and research.

Although there are a number of predatory dinosaurs in the Morrison ecosystem, one is widespread, common, and dominated the landscape. That creature is Allosaurus, reaching lengths of 29 feet and weights of 4000 lbs. However, in spite of its abundance, complete and well-preserved specimens of Allosaurus are not common. Yet those kinds of specimens are critical to understanding not just Allosaurus but the evolution of predatory dinosaurs as a whole. So, it is exciting that today this author, palentologist Dan Chure, retired at Dinosaur National Monument, and Mark Loewen, research associate at the Natural History Museum of Utah and associate professor in the Department of Geology and Geophysics at the University of Utah, have published a paper describing a new species of Allosaurus based on two nearly complete skeletons with superb skulls that provide new insight into the anatomy of this Late Jurassic meat-eater.

The greatest deposit of Allosaurus bones in the world is the Cleveland-Lloyd Dinosaur Quarry in Emery County, Utah. The remains of more than 50 Allosaurus have been discovered there and the quarry is far from exhausted. This site is the reason why Allosaurus is Utah’s State Fossil. The late James H. Madsen Jr., Utah’s First State paleontologist, dedicated his career to excavating, studying, publishing on, and preserving the Cleveland-Lloyd Dinosaur Quarry and its diverse fossils. He is best known for his often cited 1976 monograph describing and illustrating the quarry’s Allosaurus, a landmark work in dinosaur studies. We are pleased to name this new species Allosaurus jimmadseni in honor and recognition of his scientific, conservation, and educational work.

Our new publication focuses on the detailed anatomy of the skull of Allosaurus jimmadseni. While detailed anatomical description and illustration may not seem glamorous, it is fundamental in paleontology and provides the hard data upon which paleoecological and paleobiological work are built. Given the fine preservation of the skulls our paper is longer than many and will be a fundamental resource for those working on any predatory dinosaurs. 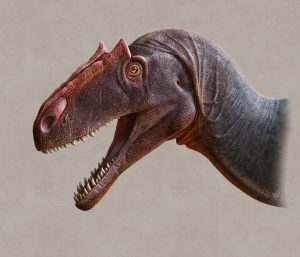 Allosaurus jimmadseni, a new species of dinosaur discovered in Utah, has a distinctive crest that runs from the eyes to the nose.

The name-bearing specimen of Allosaurus jimmadseni is from Dinosaur National Monument. It was found in 1990 by Dr. George Engelmann of the University of Nebraska, Omaha while he was conducting a paleontological inventory of the Morrison Formation within DNM. The original find was a series of foot and toe bones and a few tail bones about 10 feet off the ground at the head of a very narrow mudstone canyon (a location what would necessitate a complicated helicopter lift to bring the specimen back to the lab). Excavation soon revealed that these were part of a nearly complete and articulated skeleton. A spectacular find except that the skull was missing. It looked like another dinosaurian “headless wonder.” However, a few years after the skeleton was removed, the use of a gamma scintillator on the quarry face indicated more bone just below the surface. Excavating again soon revealed the presence of a wonderful skull that had been separated from the rest of the skeleton by only a meter or two. Together they made up one of the best Allosaurus skeletons ever found—just one that took two discoveries to complete.

This dinosaur was the subject of study for both of the authors’doctoral dissertations. While Chure was studying the DNM skeleton, Loewen was studying the vast Allosaurus collections from the Cleveland-Lloyd Dinosaur Quarry housed at the Natural History of Utah. Between the two, they had examined virtually every Allosaurus bone in the world. Eventually, they agreed it made the most sense to combine their efforts and observations into a single project. But combining everything in one paper was problematic because it resulted in a manuscript of nearly 1,000 pages and hundreds of illustrations and photos—too long for any publication. Regrouping they changed strategy and decided to go to a series of papers, each addressing a different aspect of Allosaurus anatomy and evolution. The new publication is the first of those and concentrates on skull anatomy because skulls are so critical to many dinosaur studies. 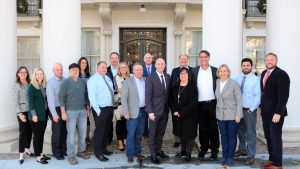