A Presidential Commission on the Status of Women event tackles what it takes to create and sustain inclusive workplace cultures.
Amanda Taylor, special to University of Utah Communications

On Feb. 28, 2020, the University of Utah hosted its annual Edie Kochenour Memorial Event. Inspired by Edith Osborne Kochenour, the networking and presentation afternoon is focused on topics of interest to women. This year, the theme was “Creating and Sustaining Inclusive Workplace Cultures: The Hard Truths.”

Keynote speaker Sara Jones, a distinguished alumna from the U’s College of Engineering and founder of InclusionPro, addressed these hard truths in a riveting speech about diversity. Her company provides easy and powerful tools for leaders who are interested in expanding inclusion in the workplace, and after speaking with over 80 groups on inclusive leadership, Jones had some particularly insightful commentary. 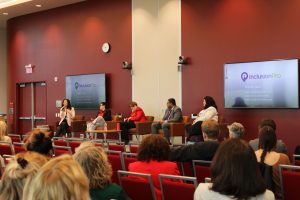 The main issue, she said, is having a compliance-based approach to diversifying the workplace.

She explained that although the end result might be to create opportunities for different employees than before, it ultimately falls flat. The external peer pressure, Jones explained, can create an impression of fairness, but represents a misalignment of goals. Although 68% of executives say they have a diversity and inclusion plan, only 36% of them say it is a part of their overall business strategy.

“There’s a lot of work to be done around organizational alignment and shared responsibility,” said Jones. “DNI (diversity and inclusion) work is both an intellectual strategic approach and very emotionally challenging. So, you are combining the heart and mind in a way that other executives are not having to do.”

Jones said in her experience, one of the best ways to do this is to include traditionally white male leaders in the conversations.

“You can see how the lines have been drawn between men and women during decades of a compliance-driven approach, where change has only happened on a need-to basis rather than a want-to basis,” Jones said. “It’s time to be inclusive of men. Why? Well, because 95% of our CEOs in the state are men; 88% of board members are men; 79% of people working in tech are men. Statistically, you can actually have a bigger impact if you can influence that population.”

As Jones told the audience, inclusion means all voices matter—and letting everybody have a seat at the table and an equal voice leads to productivity. By employing empathy, everybody wins.

“Remember that a lot of men have not had the learning opportunity that women have been engaging in for decades,” said Jones. “Establish a tone of respect, foster dialogue and remove the expectation of perfection. Encourage youthful curiosity to learn about each other’s experiences, even hire an experienced facilitator if you need to, to help with these conversations.”

Jones gave the real-life example of a female startup founder looking for investors, who might ask another male leader for tips. If the man refers her only to another woman in tech, rather than someone who could invest, he isn’t really helping her.

“If it was a male founder, you would never think, ‘Oh, I really need to introduce you and meet another man in tech,’” said Jones. “Being an awesome ally is helping women get to their goals faster, not making extra work for them.”

Jones then joined a panel to discuss the issue of diversity and inclusion further. Elizabeth Kronk Warner, dean of the S.J. Quinney College of Law, Mary Ann Villarreal, vice president for Equity, Diversity, and Inclusion, Tom Varghese, cardiothoracic surgeon and Jones discussed who their allies are. Jones reiterated her decision to work with men, and Kronk Warner mentioned the difficulty she had working with some women.

“I’ll say this as a cautionary tale,” said Kronk Warner. “I think it’s a true statement to say all of my major impediments to my diversity, equity and inclusion work in the past five years have come from women who identify themselves as liberal. I think one of the difficulties of allyship is bridging that gap. Sometimes people perceive themselves as being an ally, but they’re actually not advancing the mission.”

In addressing these hard truths, everyone in attendance was able to reflect and ask questions to the panelists and come to their own conclusions about how to be an empathetic ally and further diversity and inclusion in the workplace.