Tracy McMillan, a University of Utah graduate who has gone on to write for film, TV and books, as well as appearing on several TV shows including “Oprah,” will be returning to the U to present a lecture, “Be More You: How to Get Everything You Want By Being Exactly Who You Are,” Feb. 12 at 12:30 p.m. in the Languages and Communication Building auditorium, Room 1110. Hosted by the College of Humanities and the Department of Communication with sponsorship from the Alumni Association, the event will include a book signing, light lunch and will be free and open to the public. 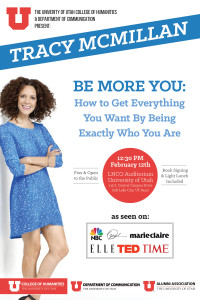 McMillan, who graduated with a journalism degree from the U in 1989, left Salt Lake for a job at “NBC Nightly News,” followed by 15 years of writing and producing TV news. She then transitioned to writing film and TV shows such as “Mad Men” and “The United States of Tara,” and books including her memoir “I Love You and I’m Leaving You Anyway.” Her lecture will draw from experiences throughout her life – beginning as a child with a less-than-ideal family dynamic, followed by three marriages, three divorces and a successful career writing and establishing her presence as a funny, relatable, relationship expert.

“I’m so thrilled to be coming back to Utah,” McMillan said. “My talk is going to be all about how to make the life you want ­— the work, the love, the ‘self’ — by being authentically yourself. I’ll touch on self-love, spirituality, my own background and service. I’ll fold in relationships, career and how to get a life you really want to live. I think anyone will be able to walk away from it a bit more excited and motivated to be more of their best selves.”

To many, McMillan is best known for her 2011 Huffington Post article titled “Why You’re Not Married,” which is the fourth most read post on the site. Time magazine named it one of the Top Ten Opinion Pieces of 2011, and the next year she followed it up with her book, “Why You’re Not Married…Yet,” which she describes as a “long, funny conversation about life, love and what to do about it all.” She explains the book as “about everything I’ve ever learned in relationships, which is a lot. Especially about what we do wrong — since I’ve done so much of that myself — and also what to do right, since I’ve done a lot of that, too.”

What love looks like—and what it does not
February 8, 2019