A tribute to Bob Garff

Garff, who was 77, passed away due to complications of COVID-19 on Sunday, March 29.
University Communications

Note: In honor of Mr. Garff’s service to the state of Utah and support of the University of Utah, the university will light the Block U red on Friday, April 10 from 8-9 p.m. The display boards in the north end zone of Rice-Eccles Stadium will also feature a tribute to Mr. Garff during that time.

Robert “Bob” Garff loved the University of Utah and was passionate about accelerating the rise of both the university and its students. It is with great sadness the U community notes that Garff, who was 77, passed away due to complications of COVID-19 on Sunday, March 29.

“Bob Garff and his wife Kathi were among the first people I met when I arrived in Utah seven years ago,” said U President Ruth Watkins. “Bob was always warm and welcoming. His love for the U was deep and abiding. His passion for helping students gain the life-changing benefits of a college degree was unwavering.”

The Garffs considered education the “differential” in life and that led the family to focus its legacy of giving on education—and especially the U, where many members of the family received degrees. Attending the U is a Garff family tradition, started by Ken Garff, Bob’s father, who received a degree in 1932. Garff received an accounting degree in 1966 and an MBA in 1967. He met his wife Kathi (BS, ’64) at the U and all five of the couple’s children are U graduates, as are many grandchildren.

Garff was chairman of the Ken Garff Automotive Group founded by his father. In addition to his excellence as a business leader, Garff served in the Utah Legislature from 1978-1986; during those years, he filled the posts of speaker, majority leader and assistant majority leader.

Garff believed in serving the community in other ways as well. He and Kathi established the Success in Education Foundation to promote excellence in education, increase literacy and prepare Utah high school students for post-secondary education success.

Their giving spanned the campus, from music to medicine, from endowed scholarships to an endowed chair and state-of-the art buildings. The Garff children surprised Bob and Kathi in 2017 with the announcement that they had made the lead donation for what is now the Robert H. and Katherine B. Garff Executive Education Building. 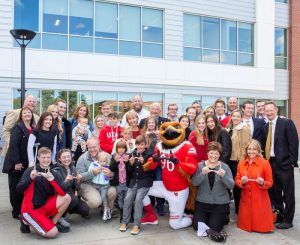 “I am deeply saddened by the loss of Bob Garff, who has had an incredible impact on education throughout the state,” said Taylor Randall, dean of the David Eccles School of Business. “He, like his father and many of his children and grandchildren, was a proud business graduate. I am profoundly grateful for his support of our students, and my deepest condolences to his wife, Kathi, and their family.”

In April 2019, the Garff family made the lead donation for the Ken Garff Performance Zone at Rice-Eccles Stadium, now under construction. At the press conference announcing that record $17.5 million gift, Bob Garff explained why his family was so passionate about supporting education.

“The University of Utah is the alma mater for several generations of the Garff family, so it is an institution near and dear to our hearts. We at Ken Garff believe the greatest asset in a community is the education of our youth. This partnership with the University of Utah is our way to encourage a legacy of opportunity for decades to come as two aspirational brands come together to improve the community for future generations.”

These were such happy events and Bob’s joy was evident for all to see, Watkins said. 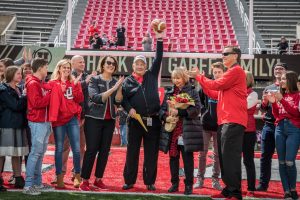 “Bob Garff was a man who cherished his family and was a role model for this community. What a blessing it has been to get to know him, Kathi and their family over the last few years,” said Mark Harlan, Athletic director. “His love for the University of Utah was profound and demonstrated through his volunteerism and philanthropy. Bob loved the student-athletes and we always talked about their academic achievements before their competitive success. My sincere condolences go to the Garff family on behalf of more than 550 student-athletes, coaches and staff of Utah Athletics. He will be missed by so many, but his impact will never be forgotten.”