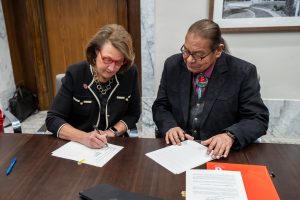 The University of Utah and the Ute Indian Tribe have renewed their memorandum of understanding allowing the university’s sports teams to continue using the name “Utes.” The university has used the name with the full support of the tribe since 1972.

“The Ute Indian Tribe is pleased to continue its partnership with the University of Utah,” said Luke Duncan, chairman of the Ute Indian Tribal Business Committee. “This agreement renews our shared commitment to building genuine respect and understanding of our tribe’s history, as well as our goal to support our youth in pursuing their education.” 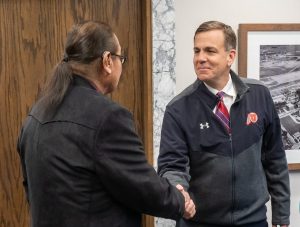 A key part of the agreement is a continuation of the university’s Ute Proud education campaign (more at uteproud.utah.edu) that explains Ute Indian History and the Ute Indian Tribe’s cultural and economic contributions to the state. The campaign also educates sports fans about inappropriate behaviors that dishonor the Ute and other Native American populations.

“We are honored to continue using the Ute name and we acknowledge the special responsibility our athletes and fans bear to the Ute Indian Tribe,” said Mark Harlan, University of Utah athletics director. “Ute history is Utah history. We look forward to carrying the name forward with understanding and respect toward our state’s namesake people.” 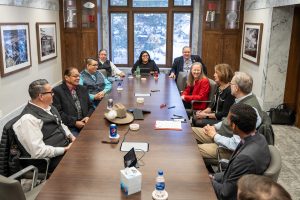 Major points of the agreement:

About the Ute Indian Tribe 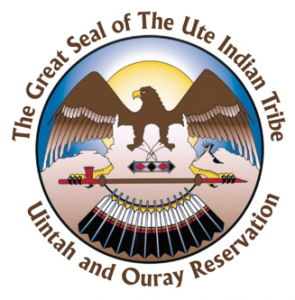 The state of Utah derives its name from the Ute Indians. The home of the Ute Indian Tribe is the Uintah and Ouray Reservation, located in Northeastern Utah (Fort Duchesne), approximately 150 miles east of Salt Lake City. The reservation is located within a three-county area known as the Uintah Basin. It is the second-largest Indian Reservation in the United States and covers over 4.5 million acres.

The Utes have a tribal membership of 3,157, and over half of the membership lives on the Reservation. They operate their own tribal government and oversee approximately 1.3 million acres of trust land. The Utes also operate several businesses, including a super market, gas stations, bowling alley, tribal feedlot, Uinta River Technologies, Ute Tribal Enterprises LLC and Water Systems. Cattle raising and mining of oil and natural gas is big business on the reservation.

The Ute Indian Tribe is made up of three bands: the Uintah, the Whiteriver and the Uncompahgre. Two representatives from each of these bands are elected to serve four-year terms on the Tribal Business Committee, the governing body of the Tribe.

About the University of Utah

The University of Utah is the flagship institution of higher learning in Utah. Founded in 1850, it serves more than 33,000 students from across the United States and the world. With more than 100 major subjects at the undergraduate level and over 90 major fields of study at the graduate level, including professional programs in law, medicine and dentistry, the university prepares students to live and compete in the global workplace.