The 2021 Hanukkah holiday begins at sundown on Sunday, Nov. 28 and is observed through sundown of Monday, Dec. 6.
Hillel for Utah

Due to its proximity to Christmas, Hanukkah has become one of the most well-known Jewish holidays, despite being a minor holiday in the Jewish calendar.The winter holiday of Hanukkah commemorates the victory of the small band of Jewish Maccabees against the Syrian Greeks and the subsequent rededication of the Temple in Jerusalem in 167 BCE. 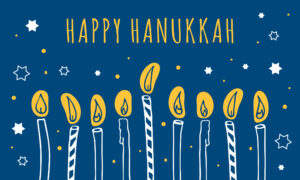 The 2021 Hanukkah holiday begins at sundown on Sunday, Nov. 28 and is observed through sundown of Sunday, Dec. 5.

As the Hanukkah story goes, there was enough oil in the lamp to reconsecrate the Temple for one night. The miracle is that the oil lasted for eight nights. Traditionally during the holiday, Jews make and eat foods fried in oil, such as potato latkes and sufganiyot, or jelly doughnuts,  to commemorate the miracle.

The eight-day festival is a joyous occasion, seen in part as an authentically Jewish way to embrace the December holiday season and its traditions of kindling lights and giving gifts. Themes of Hanukkah include lessons in hope, light, dedication, and religious freedom.

For more information about Hanukkah or any Jewish holiday, go to myjewishlearning.com.

Art & Art History’s Beth Krensky is one of five live Performance Artists up for the 16th Arte Laguna Prize award, and one of only six Americans.