The Utah Board of Higher Education has designated Ruth V. Watkins as “president emerita” in recognition of her service as the 16th president of the University of Utah.

Watkins, who stepped down in April 2021 to become president of Strada Impact, served as the university’s president from 2018 to 2021. Prior to becoming president, Watkins spent five years as the U’s senior vice president for Academic Affairs.

“It’s hard to find words that adequately express the appreciation all of us have for everything President Watkins has done, not only for the University of Utah, but for the entire Utah System of Higher Education,” said Harris H. Simmons, board chair. “I think there has perhaps never been anybody who has made such an impact and accomplished as much in such a short amount of time as President Watkins has at the U and the board was honored to grant her the designation of President Emerita of the University of Utah.”

Emeritus status is granted by the board at its discretion and recognizes former presidents who have served an institution with honor and success and who have made significant contributions over an extended period. The board’s motion to grant the status, made at its May meeting, noted it was making an exception to its policy requiring 10 years of service based on Watkins’ many contributions during her time at the University of Utah.

Watkins was the first woman to lead the U in its history. (Jerilyn S. McIntyre served as interim president of the U twice, for two months in 1991 and all of 1997). Watkins’ signature initiatives, as president and senior vice president, focused on student access and degree completion. Other top priorities included diversity, student mental health and wellness, and safety. Both research funding and donor contributions increased significantly under Watkins’ leadership, allowing the U to achieve a capital campaign goal of $2 billion in December 2020—ahead of a 2022 target date—and a record $602 million in sponsored research.

Most significantly for the future, the U was invited in November 2019 to join the Association of American Universities, placing it among the 65 leading research universities in North America. 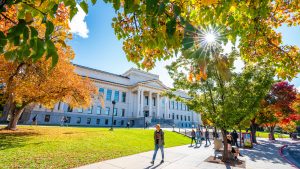